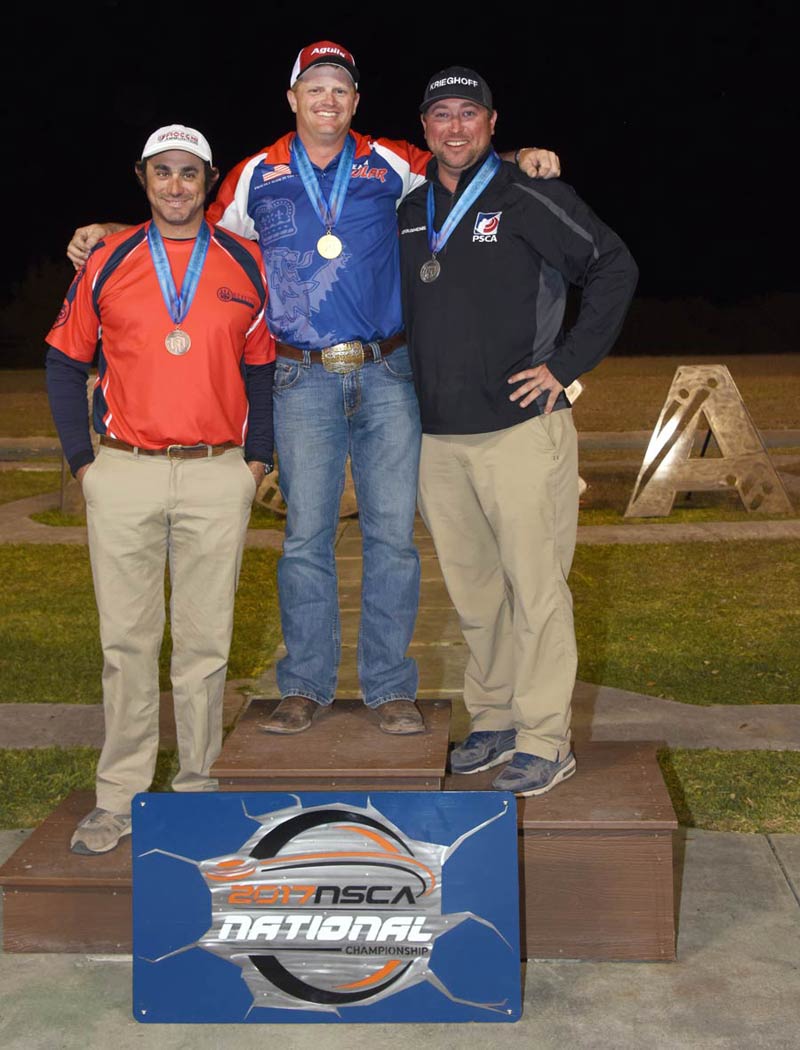 The top guns at the 2017 Nationals were Derrick Mein, Champion (center); Kevin De Michiel, Runner-Up (right) and Anthony Matarese, Third (left). Congratulations to these great competitors and all the shooters at the Nationals. Photography by Lal Threlkeld/Studio 74 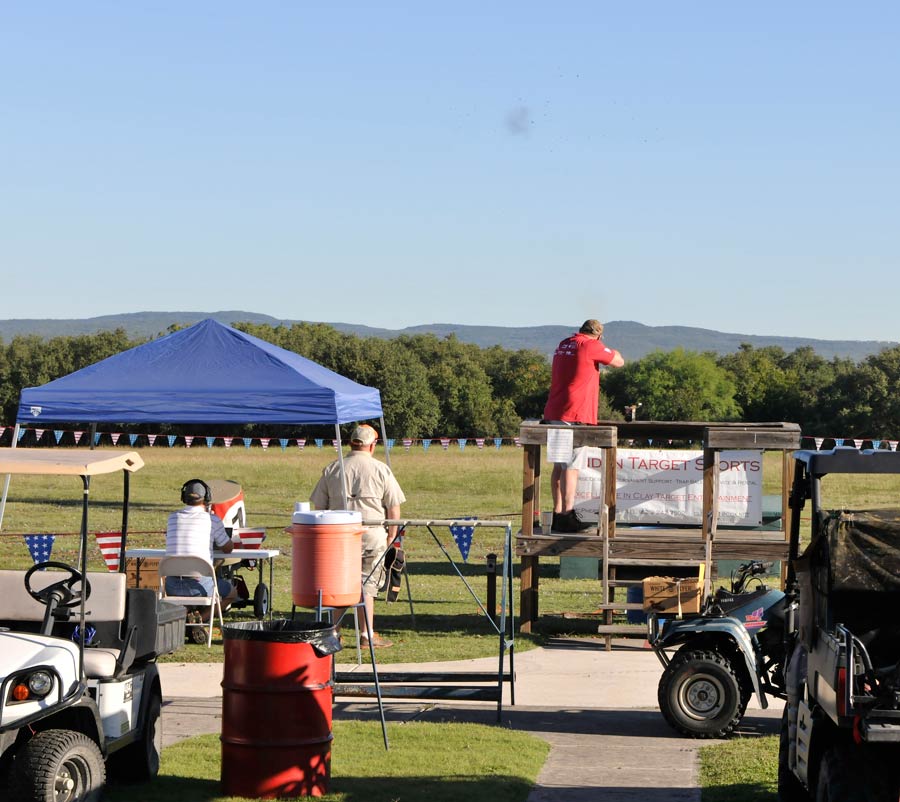 The fields along Vendors’ Row are always popular for many reasons, one of them being the exciting to watch and shoot Make-A-Break game.
Photography by Lal Threlkeld/Studio 74 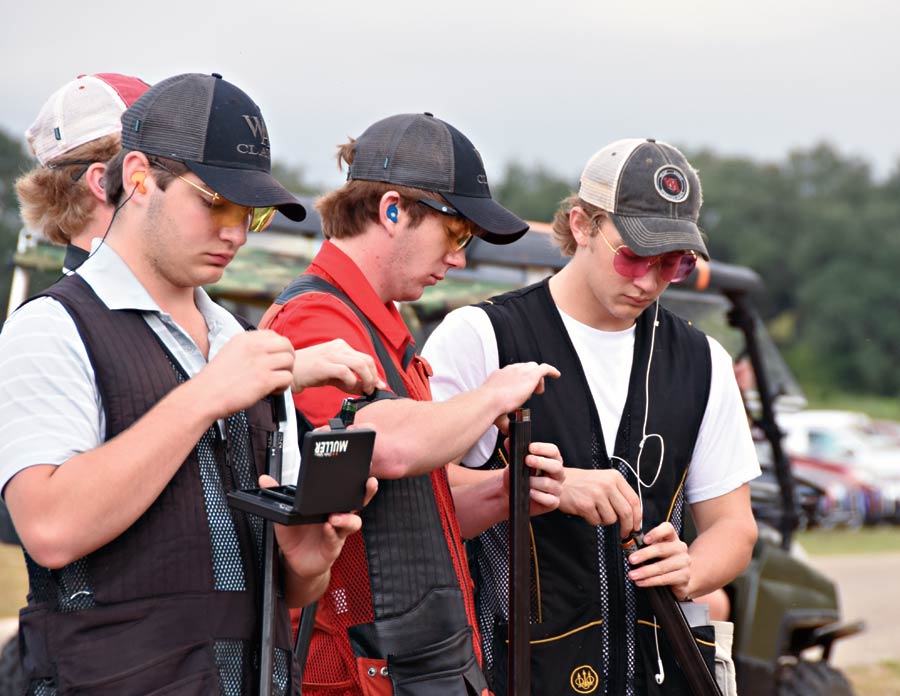 It was great to see the numbers of younger shooters in attendance at the 2017 Nationals. A trio of junior competitors have decided the upcoming station requires a different choke.
Photography by Lal Threlkeld/Studio 74

To say the 2017 NSCA National Sporting Clays Championships was a success would be a grand understatement. Even though Mother Nature threw some nasty winds in the faces of the hardened competitors on one of the days, this did not deter their spirit one iota. They kept right on breaking some target presentations that were pushing the inside of the ballistics envelope even before the wind. These same targets were beyond ridiculous when the wind came up. The NSC (National Shooting Complex) located on the western edge of San Antonio, TX, was once again the host as well as the home grounds for this shotgunning spectacle held October 21-29, 2017.

With over 2,000 shooters competing in one or more events, the 2017 Sporting Clays National Championships enjoyed burgeoning attendance of both competitors and visitors alike. Shooters, both male and female, young and old, turned out en masse to enjoy the excitement of various levels and venues of clay target competition found at this national tournament. With 118 sub-junior and 130 junior shooters, which includes 20 sub-junior ladies and 23 junior ladies, it’s easy to see how the Nationals can very much be a family affair.

Helping to provide incentive for greater shooter participation, the National Sporting Clays Association raffled off nearly 100 guns with an estimated total value of roughly $300,000. This was accomplished through multiple drawings held throughout the week that included the names of all entered shooters. These raffles were supported and sponsored by many of the attending dealers and gunmakers on the grounds. What a tremendous way to show support as well as thanking the shooters for turning out. A huge round of thanks to these great supporters of the game.

During the tournament, many social events were scheduled to welcome shooters and provide opportunities for networking and camaraderie. Wine tastings, Meet & Greet Luncheons, a Championship Party, a Ladies Tour and Shooting Clinic were opportunities for shooters to get acquainted with other shooters. There was something for everyone to take part in. And, massages were even available on-site.

With the myriad of concurrent events, classes as well as a special SCTP concurrent event, shooters had many opportunities to show up in the winner’s circle! Venues included the Main Event, of course. Other events included the K-Cup, Super Sporting, 5-Stand, F.I.T.A.S.C. and the popular sub-gauge sporting clays courses for the 20, 28 and .410 bore. Additional to the officially recognized 12-gauge F.I.T.A.S.C., 20-gauge and 28-gauge F.I.T.A.S.C. events were offered.

In case you aren’t aware, there is a noticeable resurgence of popularity for side-by-side and pump gun events these days. For the pump gun aficionados, Winchester’s mighty Model 12 and the Remington Models 31 and 870 were well represented. While adding a touch of class to these events, a few Parkers, Fox and Ithaca shotguns were spied as the guns of choice for many competing in these events.

The best shooters in the world were in attendance with 566 Master Class shooters in the Main Event as well as 221 in AA class, 171 in A class, 173 in B class, 168 in C class, 167 in D class and 101 in E class. This does not include the small gauge or the other side events. Everyone brought their best game to San Antonio. There were scores in E class better than some of those in Master Class, which shows how focused shooters were.

Did You See That Sweet 20 Gauge
What could you find down Vendors’ Row? All the better shotgun manufacturers, gun dealers, custom stockmakers, more than a few custom choke makers, engravers, gunfitters, leather goods makers, vendors with clothing and shooting glasses were set up. Anything you may have wanted or needed for the shotgun sports was available down Vendors’ Row. I witnessed several buyers who took the opportunity to demo some of the many guns available for sale. Demo sporting stations were in place on the top level skeet fields along Vendors’ Row.

The wind on Thursday was a factor in the competition with 35 m.p.h.+ wind gusts. Shooters saw fast balls, curve balls, knuckle balls and a few spit balls. Oops, wrong game! Even with the wind factor, it did not faze the best shooters. They were there to win and shoot their best scores. There was an opportunity for competitors to shoot in the two-day main event on the Saturday and Sunday prior to the four-day main event beginning on the following Thursday (day of the wind). The two-day event was put in place a few years ago to allow youth shooters the opportunity to shoot and still be able to make their school classes. Other shooters also see the value in this two-day event since it still allows the shooter to return to work with none to negligible days off.

Golf with a Shotgun
This analogy has often been used to explain what sporting clays is all about. Golfers are known to use golf carts to keep themselves fresh and on their game. Early on in sporting clays, golf carts decked out as “Clays Carts” could be seen in use by most shooters to carry their ammo and other shooting paraphernalia. What started out as golf carts have now turned into high-performance hunting rigs.

The NSCA has turned a potentially chaotic event into a finely run sporting clays event. Even with multiple venues taking place at the same time, shooters go from one event to the next with ease and have time to grab a snack between events. Speaking of snacks, the shooters were supplied with water, fruit, candy and other snacks from hospitality carts sponsored by various companies. These carts were driven from one station to the next, giving shooters plenty of opportunity for refreshment and to rejuvenate to finish out the course.

And The Not-So-Good News…
Anytime this many shooters get together with their shotguns, there are bound to be some individuals who have less-than-honorable intentions. Yes, it is inevitable guns get stolen. That is why the National Shooting Complex now provides gun storage to shooters at $5 per day per gun. Checking your gun into this 24/7 guarded facility ensures your gun will be there the next day when you are ready to shoot. This service is highly recommended given the number of cars and trucks broken into during the recent Nationals event.

There is something about getting 2,000 shooters in one place at the same time with not only their automobiles but their shooting rigs that provides a little comic relief. One can’t help but see the humor in 2,000 shooters driving golf carts/hunting rigs around the complex, going the wrong way, passing on the wrong side, blocking the drive-way, no turn signals, etc. These normally responsible drivers get into their shooting vehicles, and all semblance of rules of the road go out the window. Double the number of cars with the hunting rigs on-site and you get the picture of the tremendous amount of traffic. It is absolutely wonderful to see so many enjoying our shooting sports.

The Winners Are…
By now you might be curious as to who came away from the 2017 Nationals with the Champion’s titles. Here are some of the winners.

For a complete list of the winners at the 2017 NSCA Nationals visit http://nsca.nssa-nsca.org/ Then click on Events and then National Championship.

Congratulations to all the winners and competitors at the 2017 NSCA Nationals!

We’ll see all of you next year and hopefully some new faces as well. SS