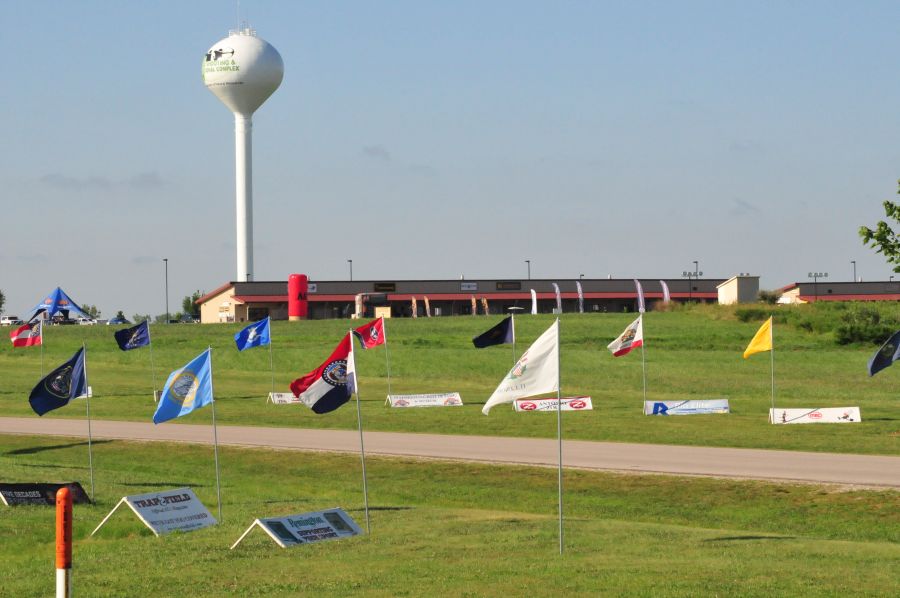 The World Shooting & Recreational Complex in Sparta, IL, was once again the host for the largest clay target event in the world, the Grand American World Trapshooting Championships. 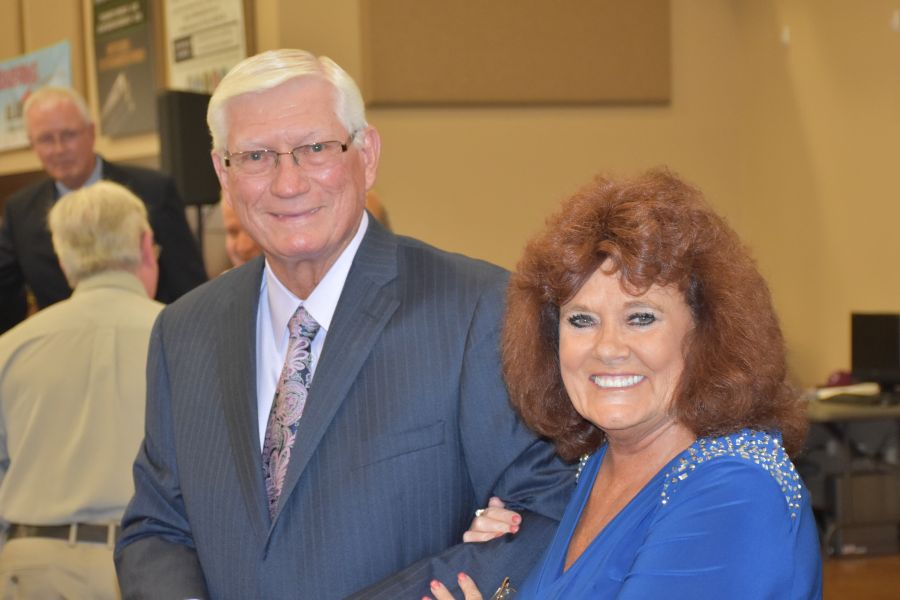 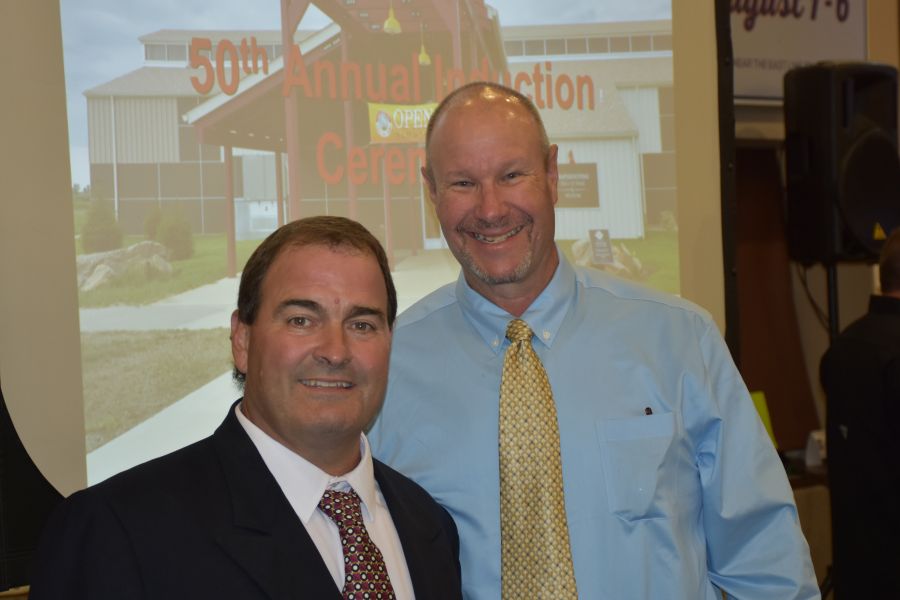 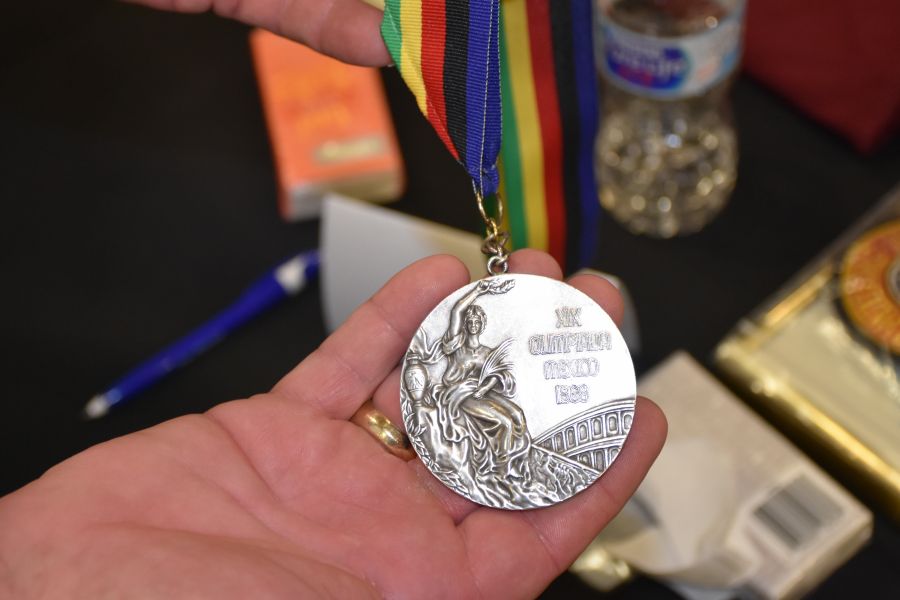 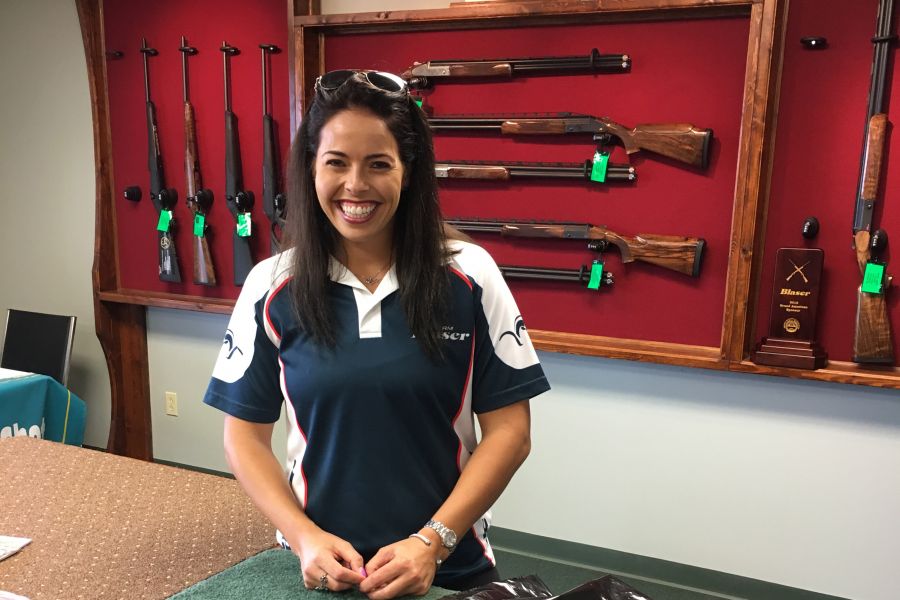 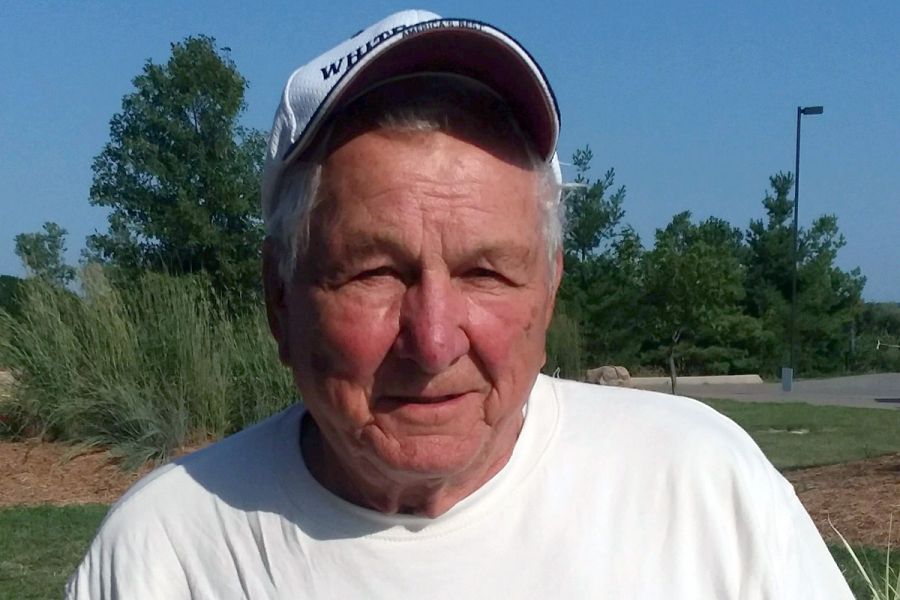 Ken Kamnikar, 79, is the oldest ever to break 100 in Doubles at the Grand. (Photo by Dean Townsend) 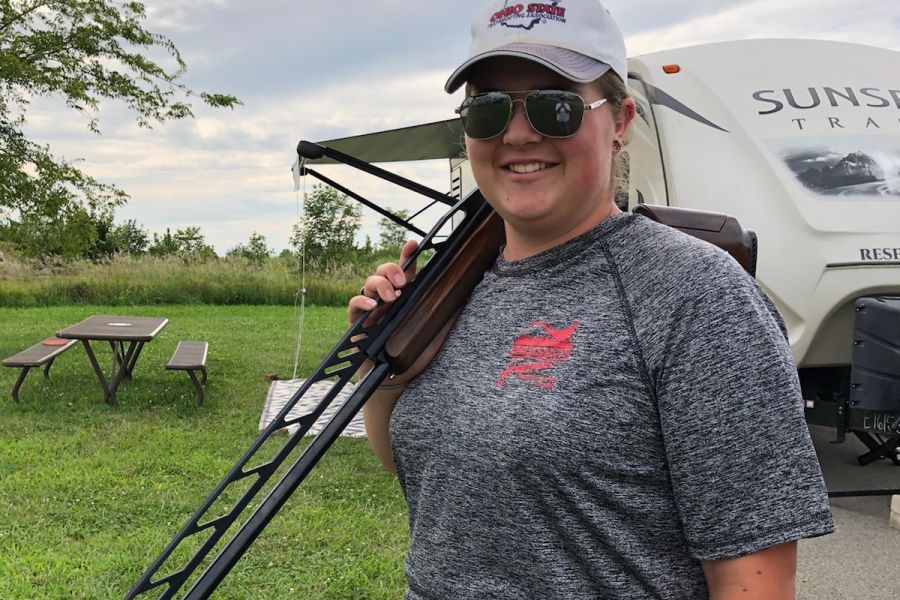 Summer Gobrecht is heading out to break more targets at the Grand American. Summer became only the second lady to be named champion in the High-All-Around event. 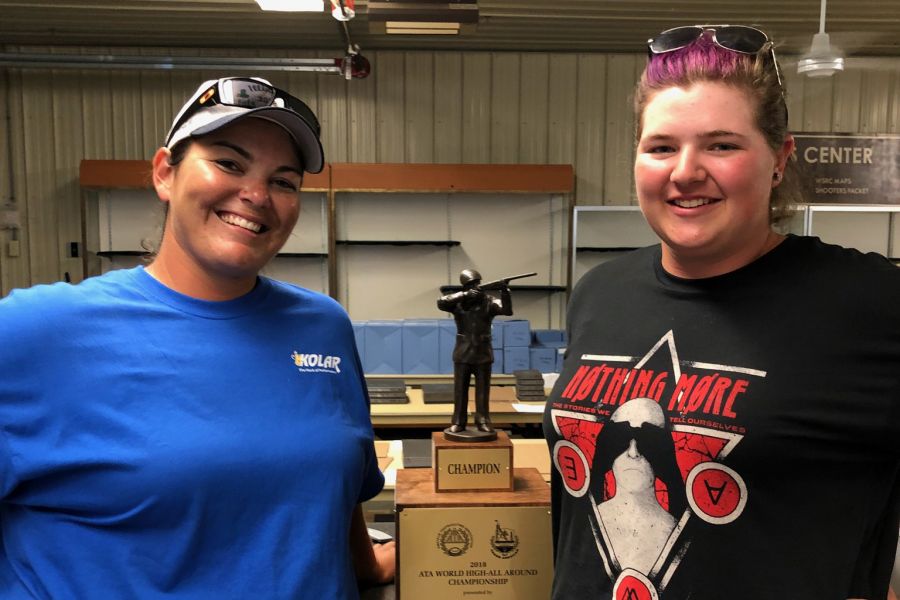 Lauren Mueller (left) and Summer Gobrecht are the first and second ladies to become the High-All-Around event champions. Lauren won hers in 2013. 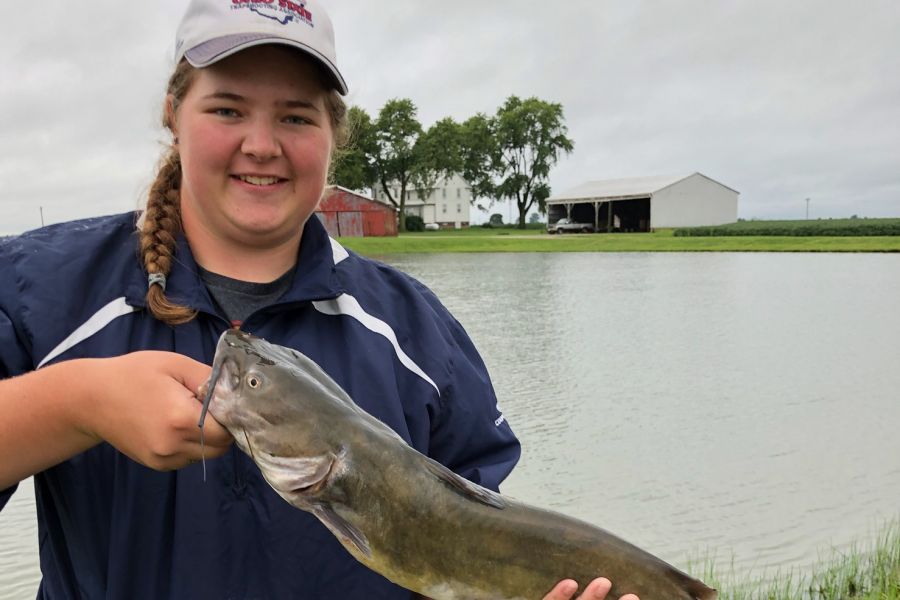 Summer not only knows how to pull a trigger, she casts a pretty mean fishing lure, too. Summer only does catch and release.

Records of all kinds were set, broken or tied. Consider this, almost all of the Grand’s 24 events were won with either a score of 100 straight or 200 straight. That was an unprecedented high level of shooting at the Grand American. It has always been said if you are ever going to run a 100 or 200 straight in your trap career, you want to do it at the Grand American. Well, that comment was never truer than at the most recent Grand.

Let’s look at some of these achievements in trapshooting excellence at the 2018 Grand American. A frequent visitor to the winner’s podium, Matthew Bartholow outdid even his high level of consistent target breaking. Matt established a new Grand American record by posting a 100 straight in each of the five Grand American Doubles events, a 500x500! Incredible shooting by Matt Bartholow.

And last, but certainly not least, we have Kelan Kinion, a Sub Junior out of Middletown, Missouri. Kelan entered the fabled Grand American Handicap Event, then later learned he had fired the lone 100 straight in the event from the 21.5 yard line. Not bad, Kelan, not bad. The man I am about to mention told me once, “If you ever win an event, that’s how you want to win it, by being the lone 100 straight. No shoot-off.”

I would like to express my sincere appreciation and thanks to Phil Murray of White Flyer Targets for researching and compiling the data on Matt Bartholow, Ryan Minyo, Pat Stacey and Kelan Kinion and allowing me to use it for this wrap-up.

The ladies at the Grand were busy breaking 100s, too. Liz Ternes of Elyria, OH, broke 100 straights in both Event 9 and Event 12, the Kolar Doubles and the RIO Ammo Doubles, respectively. Congratulations to Liz on great Doubles destruction.

It seems just about everyone was shooting lights out in the Doubles events at the Grand American this past summer. Ken Kamnikar, 79, of Lorain, OH, ran 100 straight in the Downrange Mfg. Doubles Class Championship and took home the Senior Veteran Champion’s title. He is the oldest ever to break 100 in Doubles at the Grand.

Summer Gobrecht of Findlay, OH, became only the second lady champion in the history of the Grand American High-All-Around Event. Summer’s 397x400 was the stand-alone winner. I asked Summer a few questions about her win at the Grand American, how she felt before the event, how she prepared for the Grand and how she feels now about having been only the second lady ever to win the HAA. Here are some of her responses.

Summer Gobrecht: I would first like to say my parents always stressed the importance of going to church, getting good grades and participating in sports. I tried a lot of sports and when my grandfather (Ralph Carlson) taught me how to shoot, I decided I wanted to try a shooting sport. This is my 7th year of trapshooting. My mentor, Everett Burke of Findlay, OH, told me when I was 13 I could be an All-American trapshooter.

Johnny Cantu: How does it feel to win the Grand American High-All-Around Event?

Summer: It feels wonderful, pure joy and happiness to know I shot that well competing with over 2,400 shooters. It’s an honor to be the second female, along with Lauren Mueller, to have won this event. It’s a big deal for me.

Johnny: When did you think you had a chance of winning the Grand American HAA?

Summer: I had no idea I was capable of winning such an award. I think what helped me through the HAA was I focused on my goals first and just being able to put a good score on the board.

Johnny: In the year prior to the Grand American did you have any good runs with scores, win many events?

Summer: I shot well at the Ohio State Shoot. I won Lady I Singles, Doubles, HAA and HOA. The Central Zone was where I shot my first 200 and then hit another 305 during a shoot off — for a total of 505 straight singles in a row.

Johnny: When did you begin your trapshooting career?

Summer: I began shooting trap in 2012 when I was 12 years old with the Hancock County Young Guns. My first year I had about a 60% average in Singles. I worked hard and the next year was at 90% in Singles. Then I started shooting Handicap at the end of 2013. I began shooting Doubles in 2015. Learning to shoot Singles and Handicap first really helped me with Doubles.

Johnny: What was your first gun, current gun and ammo?

Summer: My very first gun was a borrowed Winchester 1200 20-gauge pump. The first trap gun I owned was a Beretta 302A Trap Special.

Johnny: What is your current setup all-around with regard to your gun, chokes and loads?

Johnny: Why is it so many of the top lady shooters are not at the top consistently? We know there are plenty of great lady shooters out there, but why don’t we see more of them more often on the podium?

Summer: It’s about the numbers. There are a lot of great women shooters out there, and you have to shoot your best to compete with them. I do not know the exact percentage of women shooters vs. men at the Grand, though I would guess it is less than 5% compared to men. That makes it difficult for women to consistently be at the top. The Grand has been shot for 119 years, and two women have won the Grand HAA in the last seven years. I find that compelling and exciting for women shooting in this sport. I also hope to see more women have the chance to win this award, and I would not be surprised to see this happen in the future.

Johnny: Well, Summer, from what I can tell, you are a champion we will be seeing many times on the winner’s podium in the future.

On the evening of August 7th, four very deserving individuals were inducted into the ATA Hall of Fame. These men were Tom Garrigus (posthumous), Fred Nagel, Gary Sherrod and Pat Stacey. All four of these men are examples of the kind of dedication to the sport, respect of their fellow shooters and the principles of fair play the trapshooting fraternity generates. Our congratulations to each of these gentlemen for reaching this pinnacle of the sport.

According to the ATA’s Executive Director, Lynn Gipson, the 2018 Grand American enjoyed an attendance increase as did the AIM (Academics, Integrity and Marksmanship) youth shooting program. Lynn informed us the combined increase for the Grand American and the AIM Program was 6%. The AIM Program alone received a 19% increase, which is inclusive of all AIM events. Mr. Gipson and his staff deserve a healthy round of applause and heartfelt thanks and congratulations for a splendid job of directing the largest clay target tournament in the world.

There was plenty to do and see at the 2018 Grand American Trapshooting Championships, but time and space constraints prevent me from telling you about it all. I hope those of you who dropped by the Shotgun Sports Magazine booth within the Blaser building to renew your subscription or start a new one had a nice visit with our representative, Kim Kodl. She has been with Shotgun Sports for ten years as the Advertising Manager. Kim is an avid championship-level tennis player and an excellent trap and sporting clays shooter as well.