Bad Weather Can Make You Better 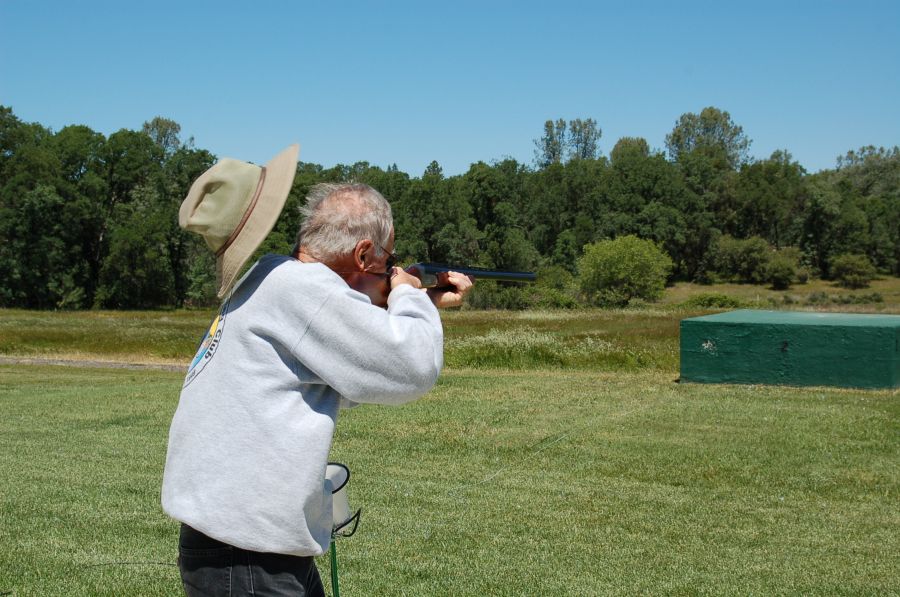 Shooting in high winds can get to you if you are not accustomed to this type of challenge. Make the most of bad weather days. Practice with purpose on those days and the next time Mother Nature gets a bit rowdy while your trying to shoot a tournament, show her you can handle it. 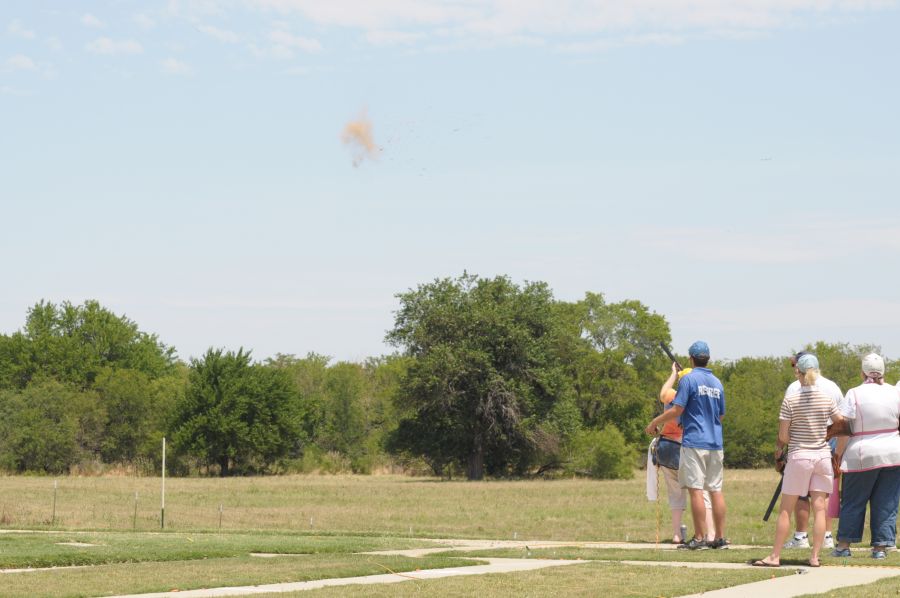 Another time to be sure and practice with purpose is when the weather is totally great. This sounds like a bit of news you should not have to be reminded of but I have often heard of shooters who cut their time short not wanting to shoot a less-than-great round during great weather.

Bad Weather Can Make You Better

Let me start this article off by describing a situation I recently encountered which was the catalyst behind this topic. I arrived at the shotgun range on a day which was extremely windy. Like most shotgun ranges, there were the “regulars” there shooting trap, skeet and sporting clays. However, they were not shooting, they were sitting in the clubhouse complaining about the rounds they shot earlier that day and the low scores they posted as a result of the wind.

I, on the other hand, felt as if I had been handed by the clay target gods the ultimate opportunity to train and practice in less-than-ideal conditions. And, I did not have to wait excessively long between rounds since no one else seemed interested in shooting.

While I cannot imagine I need to state the obvious to anybody who is reading this article, shooting clay targets is fun. However, I have found with most individuals the more targets they hit, the more fun they have. This was the foundation of my previous articles. I tried to relay some ideas on how one can train and practice to hit more targets. So when the clay target gods provide you with the opportunity to train and practice in less-than-ideal weather conditions, I highly suggest you welcome the opportunity rather than shy away from it. Imagine the satisfaction you will have when you are able to post scores 25% higher than your shooting friends when the weather turns bad because you have trained and practiced in poor weather conditions whenever you had the chance.

If we go back to the day I described earlier which was extremely windy, this forces the shooter to shoot the target where the target is and not where it should be. For a large majority of trap and skeet shooters who are familiar with the flight path of a particular target, they have a tendency to go to their comfortable break point after seeing a flash sight picture of the target emerging from the house. And, when the weather conditions are perfect, they can post very high scores using this approach. But, when extremely windy weather conditions crop up, the target will probably not be in that location, and the shooter will have to ‘search’ for the target. This ‘search’ usually involves erratic barrel movements in all directions while the shooter is trying desperately to keep his/her head anchored to the stock. By training and practicing in windy conditions, you will be reinforcing the fundamentals of vision and movement as you shoot the target where it is as opposed to where it should be.

For clay target games which involve shooting two targets in the air at the same time (trap doubles, skeet and sporting clays), a shooter needs to work very hard to find the second target during windy conditions. That's because it will not be where the shooter thinks it should be. A tailwind on a target will make it dive while a headwind can make it float. I have seen many skeet shooters being faced with a High-House target that floats while trying to shoot a Low-House target that dives. And, I can probably count upwards of close to a thousand trap doubles shooters who shoot AAA class scores in ideal conditions and barely squeak out D class scores when the wind comes up. That is because these doubles shooters became masters at shooting the doubles targets where they should be, and they were unable to change their shooting rhythm to shoot targets in different locations. These shooters can be seen shooting using a cadence regardless of where the target is when their mind says it is time to pull the trigger.

On this particular day, the clay target gods were doubly nice to me because, not only did they provide me wind to train and practice in, they also gave me cold weather. Okay, I think I just felt the majority of you reading this article cringe. Are you asking yourself why I was so happy to have cold weather mixed in with the extreme windy conditions? The answer is because I got the opportunity to train and practice using my foul-weather clothing. I added on two additional layers of clothing and wore gloves (which I usually do not do).

Like most shooters, I gained confidence in my shotgun by shooting and patterning it on a beautiful day (mid-70 degrees with not a cloud in the sky). So when I add multiple layers of clothing (or a very thick coat), my shotgun fits me quite differently. With the added layers of clothing, my head is farther back on the comb, and the automatic mount which comes up perfect every time feels awkward. As such, it takes me an extra second or two to adjust the mount before I feel comfortable enough to call for the target. This in turn throws off my timing. Therefore, I welcomed the opportunity on this particular day to train and practice like this.

Picture this scenario: you find yourself attending a multi-day shoot which is very important to you in that the consequences could result in you making a team (collegiate, USA, traveling, All-American, etc.). And after the first day, you are in the lead. Then on the second day very bad weather rolls in…not enough to cancel the day’s events but bad enough to make it more challenging. Which situation would you like to find yourself in — one in which you have practiced and trained in similar conditions whereby you have the necessary confidence to know that you can, and will, post a high enough score to stay in the lead? Or one in which you feel intimidated by the conditions and tell yourself you will be okay since everyone else has to shoot in these same conditions on that day?

The answer is simple. You want to have the necessary confidence to know you can, and will, post a high-enough score to stay in the lead because you have made it a point to train and practice in these conditions. Telling yourself you will be okay since everyone else has to shoot in these same conditions is true. However, I have worked with enough elite and world-class shooters to know most of them try to train and practice in poor conditions just for this sort of situation. For those shooters who participated in the 2018 SCTP National Championships, the above scenario should hit close to home as this event was shot in a perpetual downpour. Most of the sporting clays competitors who took part in the 2017 NSCA Nationals will remember the wind during that match. Both of these competitions held significant importance for many individuals where dropping out due to weather was not an option.

At Arizona State University the weather is very dry for most of the year. As a result, the golf team at that university spends the majority of their practices on greens and fairways which are very dry. Years ago, one of the golf coaches at the university told me there are many tournaments the team travels to whereby it will rain, and the team will perform very poorly. So on one particular day in Tempe, they got a good soaking rain. That particular day was not a practice day for the golf team, but the coach called every team member on his cellphone and told them to report to the golf course in one hour wearing their rain gear. When the team got there, the course had a good soaking and a steady rain was still falling. So, the team engaged in an impromptu training and practice session. I asked the coach if he felt one training and practice session would make the team members proficient playing in the rain. He said emphatically "No". He said his intent was to demonstrate (in a non-tournament setting) how the ball reacts differently on a wet fairway and how putts can be affected by a rain-soaked green. And, he wanted to ensure his players did not panic when they encountered similar conditions in a tournament.

When I described arriving at the range with extremely windy conditions, I am sure many of you figured I was at a gun club in Wyoming where the wind seems to be constantly blowing. You likely thought to yourself, "Where I live and shoot, it is not like that, so when the weather is bad, I stay inside." But I was not. I was at a gun club in San Diego, California, where the weather is usually outstanding. However, this just goes to highlight the fact even the best of weather conditions can turn quickly, so as a shooter you need to be prepared.

Another excellent time to train and practice is when everything is clicking. You are hitting targets hard and shooting high scores. Too many times I have observed someone shoot a high score, then put their gun in the car and go sit in the clubhouse. After congratulating them on their performance, I inquire as to when they are up next, and you would be surprised how many times I hear “I want to end on a good note, so I am not going to take a chance on shooting another round and doing poorly.” This is exactly the wrong approach to take when training and practicing. When you are hitting targets hard and shooting high scores, that is the BEST time to shoot as much as possible.

I am sure you have heard the saying ‘practice makes perfect’. This is only partially correct. The fully correct version of this saying is ‘perfect practice makes perfect’. As such, training and practicing when you are correctly executing all the shooting fundamentals will have the effect of reinforcing these good shooting habits. Conversely, I have seen individuals who are having a ‘bad day’ continue to train and practice with the hope they can shoot themselves out of their ‘bad day’ and into a ‘good day’. This does not happen! All shooters (from beginners to state champions to All-Americans) occasionally have a day whereby nothing seems to go right. On these days, a shooter will continually make uncharacteristic fundamental errors on targets resulting in an overall poor performance. On those days when things just are not going well, and no matter what you do you cannot seem to turn it around, I recommend not practicing and training. Otherwise, you will be reinforcing bad habits which in turn may lead to the development of a bad habit.

Mark H. Taylor has over 40 years of shooting experience. He has won many regional, state, national and international clay target competitions. He is the author of the book Clay Target Shooting – The Mental Game and co-author of the book Break ’em All. Mark is a NRA Certified Advanced International Shotgun Coach and a High-Performance Shotgun Coach for USA Shooting. He is a Caesar Guerini Pro Staff shooter and teaches monthly beginner shotgun clinics at Colorado Clays in Brighton, CO, and travels nationally and internationally teaching coaching courses and working with world-class athletes.