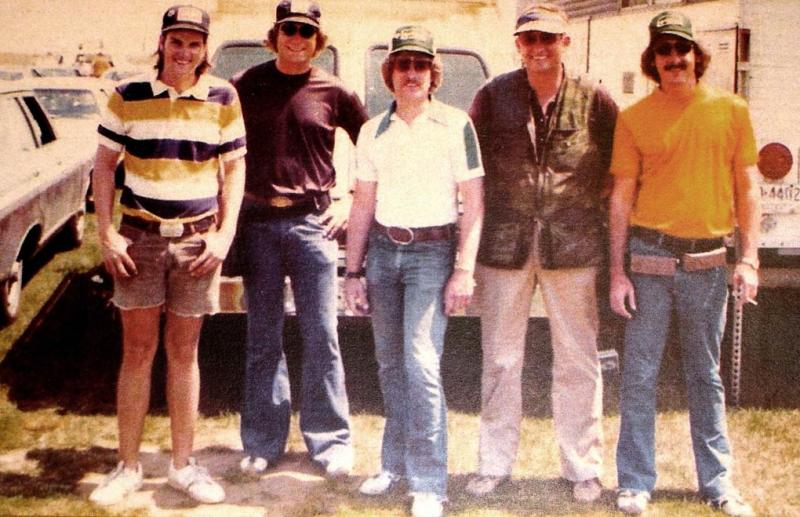 The famous 5-Man Skeet Team, the Cosmic Cowboys, Team members were (left to right) Tito Killian, Ricky Pope, Pat Bartel, Martin F. "Bubba" Wood and Robert Paxton. Tito, Ricky, Bubba and Robert were full-time, permanent team members, while Pat Bartel and Carroll Bobo would alternate at different events as the 5th man on the squad. While the Cosmic Cowboys set many of the current existing records for 5-Man Teams in skeet, the truly amazing thing is they only shot as a team for two seasons, 1976 -1977. 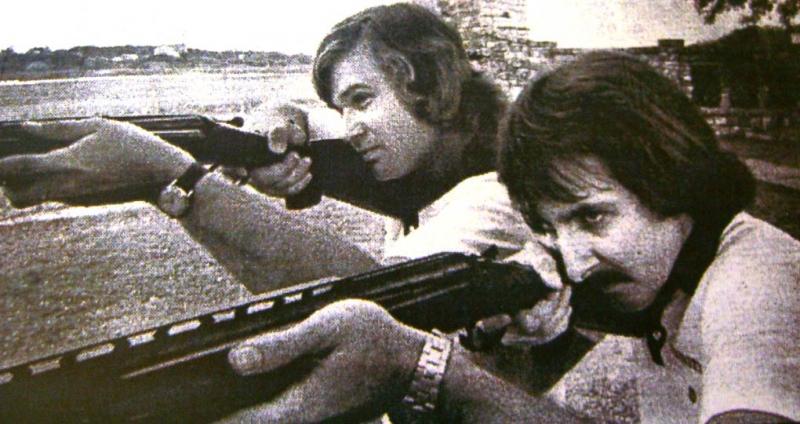 Ricky Pope and Robert Paxton. Of the original team members, the only one who still&nbsp;competes on a regular basis is Robert Paxton. Although Ricky Pope was considered by many as the finest skeet shooter of his time, when he had to choose between a working career that put food on the table and a roof over his head versus traveling and shooting, Ricky made the choice to give up skeet shooting and go to work. 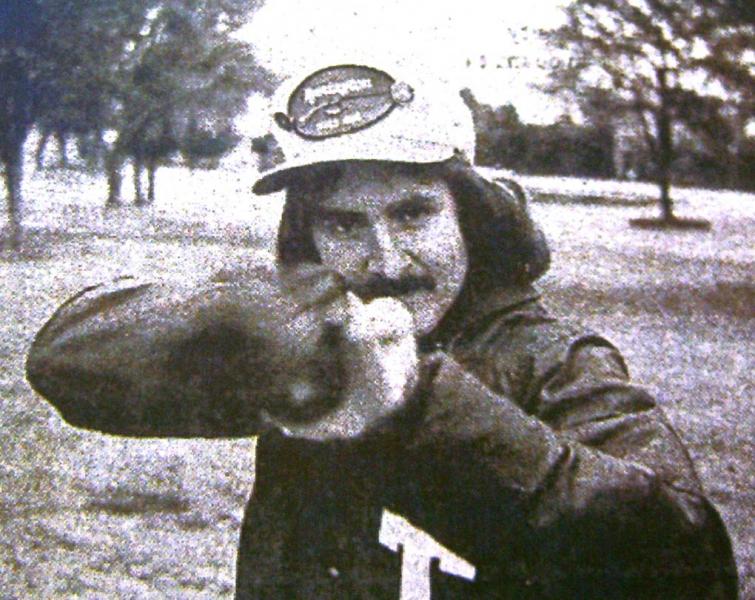 Robert Paxton (circa 1976) was a permanent Cosmic Cowboy Team member and still maintains averages high enough to earn him a place on the NSSA All-American Teams. 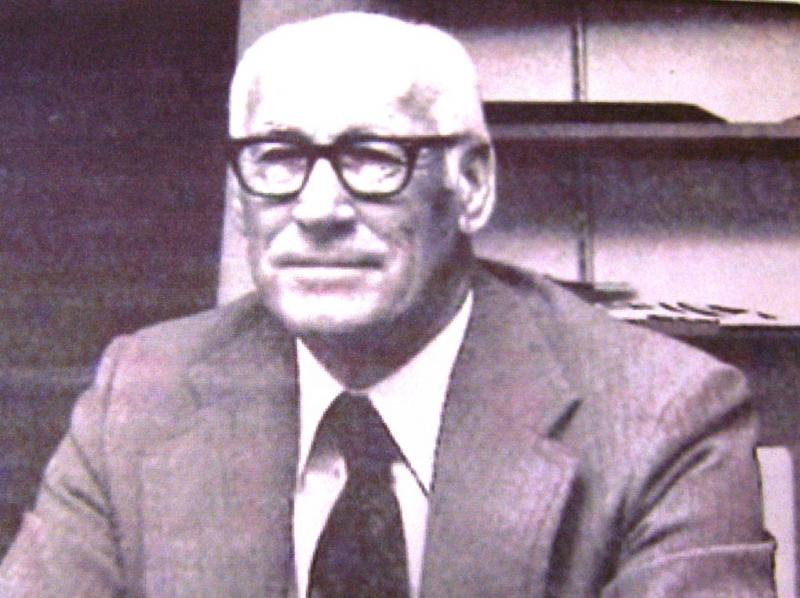 The coach of the Trinity University skeet team, Col. Tom Hanzel, who had a significant influence on the members of the Cosmic Cowboys and taught many of them the finer points of the game.

I began shooting registered skeet in 1989, and the Cosmic Cowboys had already made their mark and gone their separate ways by the time I started.

On the 40th anniversary of the inception of the Cosmic Cowboys, it seems only fitting we travel back in time and recall the famous five and recap a little about who they were and what they accomplished.

The Cosmic Cowboys were undoubtedly the finest 5-Man Team in Skeet history. They consisted of Tito Killian, Ricky Pope, Martin “Bubba” Wood and Robert Paxton as permanent members, and Carroll Bobo and Pat Bartel often alternated to make up the fifth on the 5-Man team. Individually, these shooters were world-class in their own right, but as a 5-Man Team, they were hard to beat.

I did a little research, and these are some of the statistics I came up with relative to the Texas All-State Open Teams, and even more importantly, the NSSA Open All-American Team. The following is a recap of the Texas All-State Teams during their run.

Even more impressive than the Texas All-State Open Team statistics listed above were the NSSA Open All-American Team accomplishments.

Even though the Cosmic Cowboys ended their run in 1977, they continued to shoot individually for a while. Robert Paxton continues to shoot skeet competitively today. Pat Bartel and Carroll Bobo still shoot sporting clays from time to time.

In 1978, all four of the original Cosmic Cowboys and the two alternates, Carroll Bobo and Pat Bartel, were on the NSSA Open All-American Team. Here is the team.

For the two years prior to the establishment of the Cosmic Cowboys, Wood, Pope and Killian set some 5-man team records shooting with Jr. Peale, Hefner Appling and Tommy Bauer, calling themselves the “Texas Armadillos”.

All the following World Records were set by the Cosmic Cowboys.

The statistic that probably best sums up the 1977 season for the Cowboys: The Cosmic Cowboy with the lowest HOA average in 1977 was #7 on the HOA High Average list for the entire country.

Four of the Cosmic Cowboys have been inducted into the NSSA Hall of Fame.

So I asked Robert the obvious question: did you establish the team based on the fact you were the best all-around shooters in the country? He said not exactly — there is a whole lot more to it than just shooting skill, although that was a crucial factor. The Cosmic Cowboys really came about because of the leadership of Martin “Bubba” Wood. He was the elder statesman of the group (the only adult) and initially gave the group the impetus to get together. He became the mentor to the team. Martin had already been a member of the Open All-American Team in the 1960s back before the team got together.

Robert noted the team would drive Bubba’s suburban with all the guns and ammo to the shoots and Martin would fly. Basically, Bubba was the team leader. Robert noted Pat Bartel and Tito only went to Trinity University for a time and, of course, Robert and Ricky matriculated from there. Robert emphasized friendship played a key role in the team getting together. Sometimes personalities have a lot to do with shooting compatibility, and those five had it all. Robert said they roomed together, ate together, practiced together and shot together. It was a magical time to shoot in the group.

Trinity University had a reputation of training some of the greatest skeet shooters of our time under the instruction of the late, great Col. Tom Hanzel. Many skeet champions would follow in their footsteps from Trinity University, such as Todd Bender.

I asked Robert who came up with the iconic name? He said Tito Killian. He was impressed with a song from the early ’70s by the country rock star Michael Martin Murphy, Cosmic Cowboy. Later that year, it was sung by Nitty Gritty Dirt Band, and the name stuck. From the looks of their haircuts at the time, there were certain similarities to the Nitty Gritty Dirt Band.

I asked Robert was there any specific shooting order, and he said not really. He did say Carroll Bobo and Pat Bartel were the 5-man alternates, and one or the other always shot 5th.

I asked Robert if there was any specific memorable moment during your time with the team, and he said yes. The most memorable moment for him was when the group was shooting The Great Eastern at Lordship, one of the birthplaces of modern skeet. Robert indicated the squad drew probably the largest group of spectators at any shoot they had ever shot in. The team was at their peak during skeet's golden era. Five-man teams were big in that era. There were other 5-man teams of that era like the Nutmegs consisting of Dom Piscitelli, Jack Gallager, Joe Callahan, Bobby Haydu with Bill Norman, Bill Lockwood and John Jensen as alternates. When the team took the field, a crowd gathered to see what this mystical team from Texas could do against the Nutmegs. Even with the large crowd watching, one day they broke 500 x 500, and the next they broke 499 x 500. They triumphed over the Nutmegs.

Robert was on another 5-Man Team before the Cosmic Cowboys, and they were called the Whiz Kids. They consisted of Robert, John Clark, Mark Nelson, Jackie Ramsey, Mike Schmitt (Azle), Brad Simmons (who went on to shoot in the Olympics) and Ben Byrom. In the 1971 or 1972 World Shoot, they made a name for themselves. I asked Robert about the unusual manner that Ben Byrom supposedly mounted his gun. Did he really mount the buttstock on his sternum and put his lower chin on the top of the stock? He said yes and ran many a perfect score doing that. That was an opening for me to ask about a story I had heard about the unusual way Tito Killian shot High Two. I told Robert the rumor was Tito held left of the window on High Two. Robert did confirm that Tito held close but not left of the window.

At that point, Robert shared a couple of other great shooters with unusual methodologies of shooting. He allowed Barney Hartman (Canadian shooter) and even Jimmy Prall, the great industry shooter for Remington, would mount their guns at the center stake, swing back towards the house. When they got to their go point, they would say “pull” and reverse directions without ever stopping their guns. I remarked the great Mike Schmidt, Jr. and Stewart McCoin did a similar motion, and Robert said yes but not quite to the extent of the other two men.

You only shot together for two seasons. What was the contributing factor to your separation? After graduation, Ricky Pope simply had to go to work. He said if he could not give the time and dedication to the game that it deserved, he would have to quit. He went out at the pinnacle of his game and never shot again.

The last remaining Cosmic Cowboy still shooting competitively is Robert Paxton.
Some of his career highlights are:

Member of the NSSA and TSSA Hall of Fame

Shooting tip from Robert: Shoot practice with as much intensity as your competition targets.

Thank you, Robert, for your contributions to this story. Memories of the great shooters of the past are quite inspiring. SS

John Bulger started his skeet shooting career in 1988 at 42 years of age. He shot his first 100 straight the following year in the 28 gauge and since then has broken a total of 239  perfect scores: 90 in the 12 gauge, 77 in the 20 gauge, 54 in the 28 gauge, 10 in the .410 bore, and 8 in the doubles. John has been on 16 All-American Concurrent Teams, 21 Texas State Teams. John has earned both his AA and AAA pins including a 4x50 Pin earned at the Hodgdon Mini-Southwest in 2010. John’s most memorable accomplishments were winning the Briley Bradshaw in 1997, the Texas State 12 gauge Champion in 2002 and the Texas State Doubles Champion in 2011. That same year John was awarded the Earl Barroso Award for winning the Senior HOA at the Texas State Championships. John was also the Senior HOA Champion at the Mini-World in 2010.  During his career John has shot 170,050 registered targets. While he’s had a couple of 399s, a 400x400 is still on John’s bucket list. John served on the TSSA Board of Directors from 1997-1999 and has been a member of the Dallas Gun Club since 1989. John has been a contributing writer to Shotgun Sports since 2013.