Embrace Your Gun for Better Control 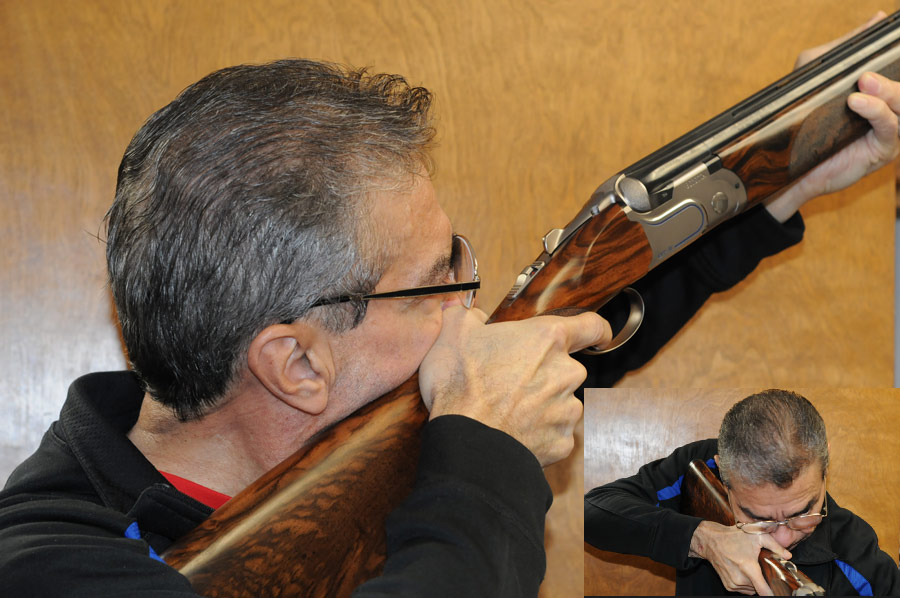 Are you comfortable with your Length of Pull? Is it allowing you to be all you can be? On clay targets, that is. Read on and see if a small change in your LOP might help you score better than you thought possible. 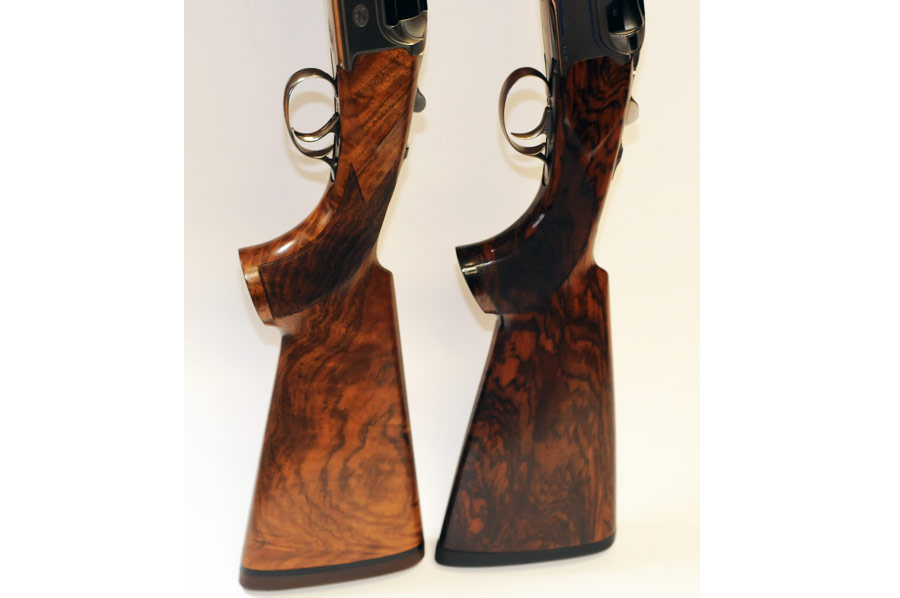 Two of my guns showing the Low Parallel comb shape I prefer over a standard drop type of comb. On the left is my Zoli Z Sport and on the right is my Beretta DT11. The shorter stock LOP and one or two other modifications allow me to snug my control hand firmly against my cheek and nose. The benefit was an unexpected increase in the control of my barrels and thus better hits, etc. 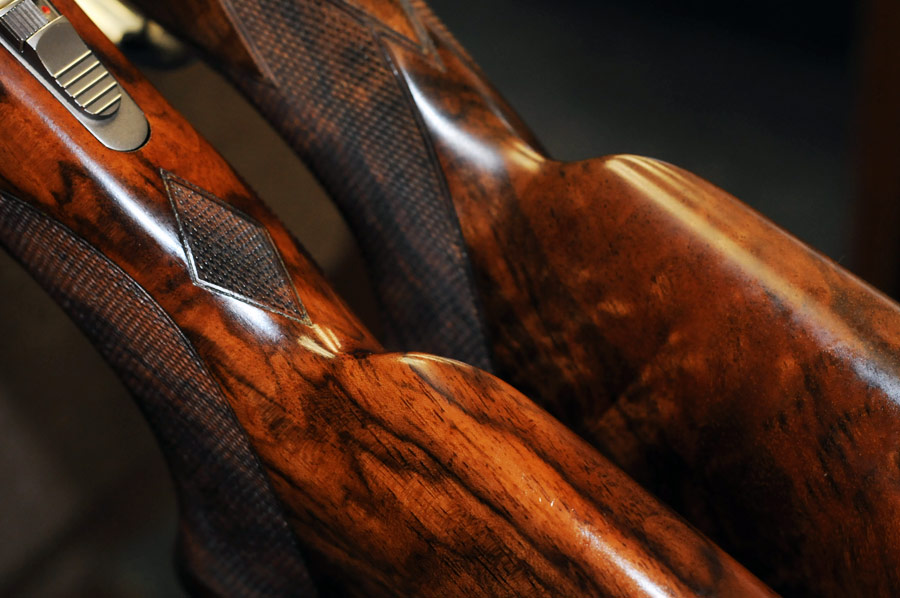 Here is a view of what I do to the left-side thumbflute. The Beretta DT11 is on the left, the Zoli Z Sport is on the right. Since I do not intend on ever becoming a left-handed shooter, I remove the left-hand thumbflute then shorten the stock which will then allow me to be far more comfortable and virtually locks the barrel to my cheek and nose. The barrels now have to look where my eyes look.

Embrace Your Gun for Better Control

If you have read many gun reviews on any firearm designed to be fired from the shoulder, I am sure you have read the standard factory stock that comes with a shotgun or rifle is designed with dimensions intended to fit “Joe Average”. Well, you probably have also learned that Joe Average doesn’t exist and just about everyone gets a gun that does not fit them. Subsequently, the newbie shooters with new guns are always taking shots with little chance of success.

As you progress in the clay target games — be it skeet, trap or sporting clays — you will eventually learn enough about how a fitted gun, like a fitted pair of slacks or a suit, looks better and performs better on and for you. It is at this point where I make a gun fit change that, for me and a great number of top-flight shooters, really makes a difference. I call it “embracing the gun”. I will describe it in detail for you.

Most stockmakers have a suggested distance they want to see the customer achieve with the thumb of his control hand. When the gun is mounted to the face and shoulder, usually you will see a distance of about 1" to 2½" between the thumb at the cheek and the top rear tang of the receiver. This is classic positioning according to the standard rules stockmakers abide by, and it is particularly prescribed by the British stockmakers. Generally, for most people, this dimension is adequate.

However, over the last 20 years or more I have noticed a good number of top-ranked shooters, such as Anthony Matarese, Jr., Scott Robertson, Dan Carlisle and other notable shooters incorporate much more of an embrace to their guns than what you normally see club shooters use. I have preferred this more up-close and intimate embracing of the stock for many years. For one thing, it looks more aggressive toward the target. I feel it allows you more control of the gun and allows you to get more into the gun or to “crawl the stock”, as some people call it. This embrace is not normally achieved by just hugging the stock closer to you. You will likely have to get the stock shortened accurately, along with some other modifications, in order to achieve this.

The first time I saw anyone shooting with this type of stock mount was at a rifle range many years ago. The man that was using this style of mount was benchrest shooting his heavy-barreled SAKO rifle in .222 and another in .22-250. I asked Bill why he deviated from his normal mount on the small-caliber SAKOs versus his larger .30 caliber rifles. His explanation was interesting: he said he felt more in control of the rifle when he crawled the stock on the .222 and the .22-250. He told me he learned it from a WWII Marine sniper. He just felt more “with” the gun when he mounted it that way.

Years later when I began shooting skeet on the national circuit I was reminded of this technique when I saw Robert Paxton and another talented skeet shooter from the Houston area, Lynn Smith, both mounted their guns in this manner. I have always preferred a stock shorter than 14" LOP and a generous amount of cast. All the better to accommodate my once-rounder face and cheeks. But my main goal when I work on a new gun stock is to be able to comfortably, without any contortion, get my right thumb snug against my nose with my eye looking right down the center of the rib. I use this mount regardless of the target discipline. Also, it is a rare day when I shoot a higher POI than what my guns provide me.

I have tuned my stocks so I see a 55/45 to 60/40 POI. The only gun I have that shoots a little higher is my Blaser F3 32" Super Luxus Sporting. The only reason it shoots a touch higher is because the wood is so nice on it I almost had a heart attack when the time came to cut the stock shorter. The LOP is a hair under 14”, and the way it hits targets says to me there is no reason to shoot this stock in any other configuration.

I mentioned other stock modifications that include shaving the left-side thumb flute off of the grip area. This is done for three reasons: I do not intend on ever becoming a left-handed shooter, and since the edge of the flute would bite me in the cheek pretty hard, I remove it. The second reason is by getting rid of the flute, my face now has a bigger bearing surface to spread recoil stresses over. The third reason is my right eye gets much more dead center behind the receiver when the stock is mounted.

Another modification I do to my stocks is to make the comb what could be called a low parallel comb. The height of the comb is low enough to give me the sight plane I desire when looking over the length of the rib, as well as giving me that same sight plane regardless of the clothing I am wearing. That sight plane does not change whether I am wearing a thin shirt in the summer or a thicker jacket in winter. The only thing I do to help accommodate the stock fit with regard to LOP is to change out the recoil pad, a thinner one in the winter and a thicker one in the summer.

You might ask why I would ever even think about modifying my stock to get me that close to the back of the receiver. Simple, I saw what it did for Bill at the rifle range, and someone else whose opinion I had great respect for began doing it. Jess Briley had once told me he felt most shotgunners were using LOPs that were really too long for them. He began shortening his stock and, lo and behold, his skeet scores began to improve almost immediately. That was all I needed to know.

Is there any detriment to shooting a mount that gets you that close to the receiver? As of yet, I have not discovered one. For those sporting and FITASC shooters who either prefer or are mandated to shoot with the stock beginning in the prescribed low position, this type of stock dimension makes this even easier.

Can you get too short with the LOP? Yes. I mentioned a moment ago Jess Briley had begun to shorten his stocks, and Jess quickly came to the point where the stock was no longer comfortable nor would it move with the smoothness and precision he was wanting to keep. I also came to that same point when shortening my stock.

Before I began to have the stock shortened, I realized there was the possibility I would not like the shorter LOP on my original stock. It was an attractive piece of wood, and I am a sucker for great-looking stocks. I rummaged around in my reloading/catch-all spare room and found an old stock for my 680 Beretta that was nothing special to look at. I decided to have that stock be my subject for my experimentation. Within a few weeks, I found the length that worked best for me, and my scores improved in my skeet game. What impressed me more than just a better score was how much better I was hitting the targets. The precision with which I could move the barrels was also improved. This was a bonus I had not expected. Yippee!

I have thought a lot about why my precision of barrel movement increased with the shorter LOP and other modifications to the stock. I attribute that bonus to the snug fit my mount now gives me against my cheek and nose does not allow the barrel to get away as easily from my face as I am moving on a target. Before I went to using a shorter LOP, it could happen that my line of sight to the target and the center line of the barrels could loosen up from each other as I moved to and with a target. This would often be such a subtle change it was hard to notice it happening. But now my barrel is virtually locked to my face, and wherever my eyes are looking, that is where the barrels are looking. Better hits mean increased confidence in my shots, which means better hits and it snowballs from there.

In summary, I would say I agree with Jess’s comment from years back, and that most shooters do use stocks that are too long for them. Not to say what they have they can’t get used to. My opinion is their current LOP is not allowing optimal performance. Can they all be remedied of this by simply shooting a shorter stock? No, I did not say that. But I would be willing to bet more of the shooters who would at least try it, would like it.

What do you say? Are you up to the challenge? SS