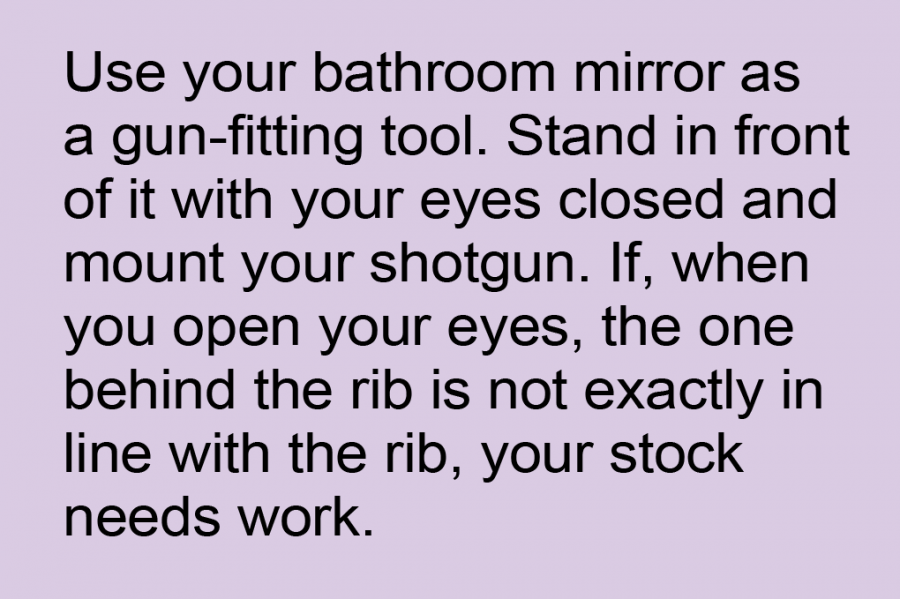 Last fall, I came across a post on an Internet site that included 50 or so photos taken at the 2019 Westy Hogans tournament at Elysburg. They were taken as fairly close-ups of many different shooters in the process of shooting by someone with very good shutterbug skills, and I was amazed at the number of obviously ill-fitting guns that were captured in action, many caught during the shot was exiting or having just exited the muzzle. To say it was remarkable is putting it mildly. I wish I could take pictures like that!

One of the worst examples was a person with a stock so much too long that their head was resting on the rear half of the comb. Because of how outstretched the shooter’s arms were, that gun had to feel like it weighed twice its actual weight. An older gent’s head was laid over the comb so far in order to get his eye aligned with the rib that his eyes had to be at no less than a 30-degree angle to the horizontal. Even 45 degrees might not be an exaggeration! His gun had to pound his head with every shot. Another male shooter’s stock was so excessively long he held the gun almost parallel with his chest to compensate for the stock’s length. That, no doubt, resulted in the edge of the recoil pad instead of the wider face of the pad bearing against his shoulder pocket, causing him to feel more pain from recoil than necessary. All of those conditions had the potential to reduce their scores due to fatigue, discomfort or the gun just plain not shooting where the shooters were looking.

Those were just some of the cases of poor gun fit I saw. Now here’s the kicker — these were not your typical casual, every now and then, behind-the-barn type shooters. After all, they were competing in a registered ATA tournament and darned few of them were not shooting a Kolar, Krieghoff, Perazzi, Ljutic, Silver Seitz or other expensive gun, many of which were nicely embellished high-grade versions. These were shooters who obviously had the financial resources to have the factory stock altered to fit them or to buy a custom-fitted one, so why shoot a costly gun that doesn’t fit? And they spend a lot of money doing it while possibly generating scores below their potential.

I’m going to answer my own questions by saying they likely never saw a photo of themselves shooting that gun. Or they reacted like a friend of mine and his son did when Phil Kiner told them during a clinic that the very attractive custom stocks on their Krieghoff K-80s didn’t fit them — they refused to believe it. Or they have simply become so accustomed to their guns fitting like they do that they just don’t notice it.

It has been said many times, by me among countless others, that gun fit is of paramount importance in shooting a shotgun. We’ve all seen someone pick up a gun, mount it and declare it fits them. I especially get a chuckle out of the ones that mount a rifle with no sights or optic and say that while looking over a bare barrel. Or place the stock’s butt in the crook of their elbow and say the gun fits them if the stock’s wrist falls into their hand.

If you have to wiggle your head around at all to get your eye aligned with the rib, the gun doesn’t fit you. When the target comes out, your brain will relocate your head to an unforced position, and you just did the same thing as if you moved the rear sight of a rifle because your eye is the rear sight of a shotgun. And, the length of your arms has no bearing whatsoever on gun fit — it’s the length of your neck (upon which your head containing the rear sight sits) that matters. Picture in your mind a shooter with a shotgun mounted as viewed from his gun side. Now imagine his arm becoming longer and shorter. The only thing that moved was his elbow, right? His head stayed put, and that’s the important part of your shooting anatomy.

Use your bathroom mirror as a gun-fitting tool. Stand in front of it with your eyes closed and mount your shotgun. If, when you open your eyes, the one behind the rib is not exactly in line with the rib, your stock needs work. Most shooters need some offset, which is best described (by me, anyway) as the stock not being perfectly straight. The portion of the stock under the comb is offset away from your face then turns back straight, thus allowing room for your cheekbone, so your eye is aligned with the rib. Some people can get away with some cast — either cast on or cast off. A stock with cast is angled toward (cast on) or away from (cast off) from the wrist back. Wood stocks can be bent, believe it or not, unless they have highly figured wood that can break before it bends. Stocks are most often bent using a device that exerts pressure on the side of the butt while hot oil flows over the area to be bent. I had one stock bent, and it came out well. The firm you select to possibly bend your stock will evaluate its ability to take a bend before agreeing to do the job. The company I used, Allem’s Guncraft in Zionsville, Pennsylvania, charged $175, if I recall correctly.

Not only people with wide faces need offset and/or cast. Some folks have eyes that are slightly closer together than average; that, in effect, makes their face wider because it has to be over farther behind the gun in order for their eye to align with the rib. I’ve even seen stocks that were made very angular in order for a right-handed shooter’s left eye to be aligned with the rib! While I suppose it is possible for someone — that unknown person known as the average shooter — to have a gun fit them right off the rack. But, suffice to say, I have never seen a top shooter using an unaltered factory stock. An adjustable comb is just about mandatory on a target shotgun, and some of us need more adjustability than that.

Pretend your trap gun is a rifle. Would you go hunting without adjusting its rear sight or scope?

Speaking of Scopes
Since slug guns often have a scope mounted on them, here’s a tip I recently learned from the good folks at Leupold. If you have ever moved a scope from one gun to another or purchased a used scope, you probably wanted to get the scope’s reticle centered as it was when it left the factory before mounting it. The method most of us use to accomplish that is turning the adjustment turrets all the way in one direction and back fully the other direction, while counting the number of clicks while then reversing direction exactly half the number of the total adjustment clicks. Not only is that tedious and somewhat boring, it takes a lot longer and actually is less accurate than this method.

Hold the scope against a mirror and look through it as if it was on a gun — use the same amount of eye relief as you would when shooting. If you look “past” the reticle, you will see a second reticle — that’s the reticle’s image in the mirror. Just adjust the turrets until both images are superimposed upon one another and you’re done!

Ed’s Mail
Fred Leonardi sent me a photo of his P-W loader with some of that company’s accessories with which I was not familiar. One I would have liked is a trough that routes loaded shells around to the front of the loader.

Some of you may recall my mentioning a request for information regarding older Winchester shotguns without serial numbers by reader Don Keller in response to my mentioning retired Winchester representative John Muir. I forwarded Don’s email to John and here is his reply: “The Model 97 was the forerunner to the famous Model 12. Both guns without readable serial numbers most likely came from the product service department at Winchester from what they called the ‘dead rack’. That was not an uncommon practice after WWII in that most guns made by Winchester in those days had gone to the war effort. Reps in those days gave loaner guns to promote the shooting sports while manufacturers geared up for public consumption.”

I’m sorry this column is somewhat abbreviated from my norm. October has been an ultra-busy month for our family. We had to have a new heat pump installed, my wife required some surgery, I’ve been working overtime and have several friends’ rifles for which I am to develop handloads (but haven’t touched yet). I’ll try to do better! But until next month, please do keep your questions, comments and suggestions for column topics coming to eclapper19@comcast.net. I do appreciate them. SS

Ed Clapper started shooting trap in 1974 but quit six months later due to limited ability and a sore jaw after every shoot. He tried again in 1989, but this time had friends who helped him overcome the obstacles. He liked the sport and became a student of it, attending several shooting clinics, some more than once. In 1989, he was automatically low man on the squad; in 1994, he broke his first 100-straight and won his first registered shooting trophy at the Carlisle, Pennsylvania, Fish & Game Association. His first 200-straight came in June, 2000, at Elysburg during the Pennsylvania State Shoot, where he came in third in a seven-man shoot off for the state championship, finishing as Class AA winner. He earned his 27-yard pin that July. Ed wrote for Trap & Field for many years and began writing for Shotgun Sports in 2002.