Herb Orre and the Super Choke 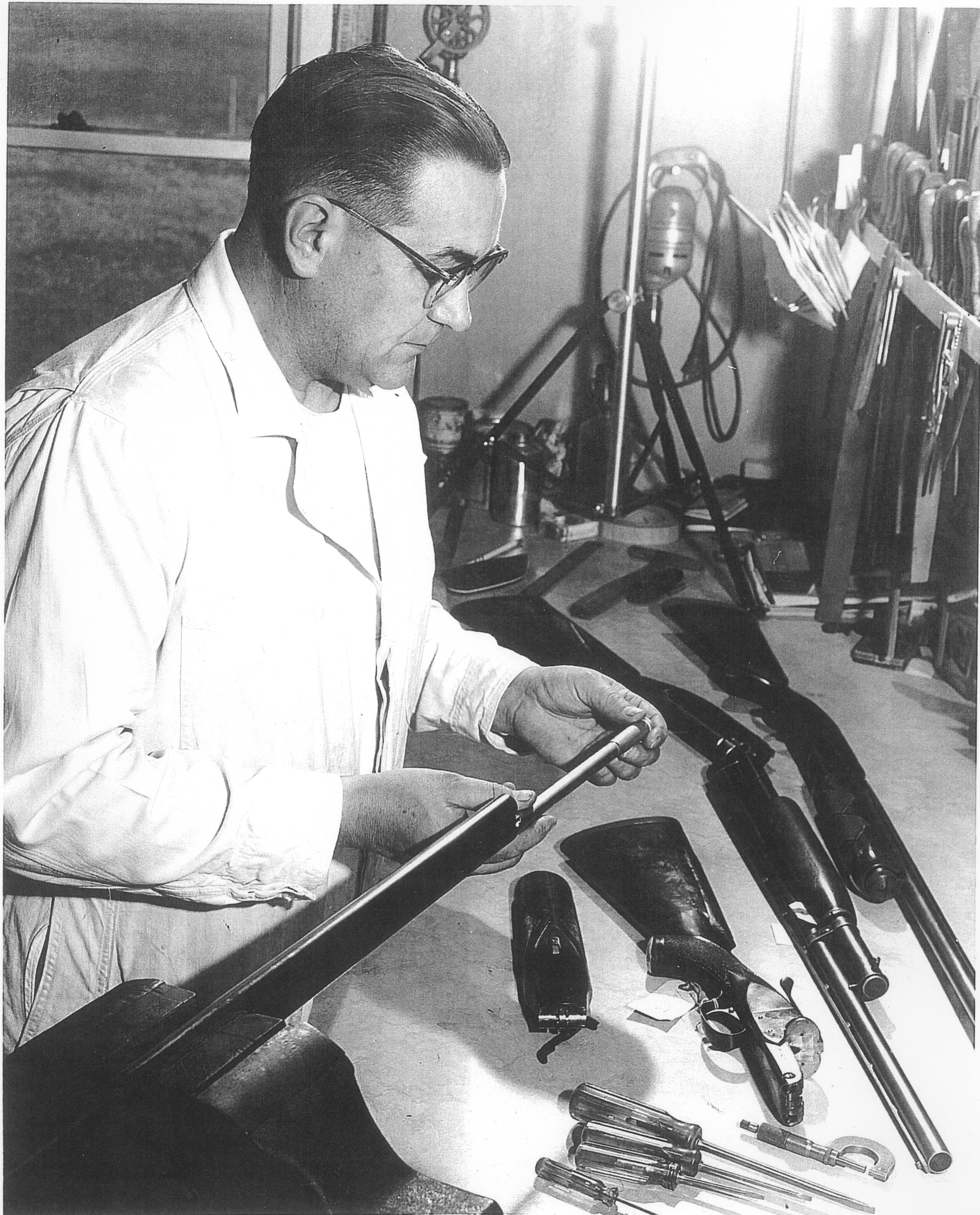 Herb working in his shop on the farm circa 1960s. 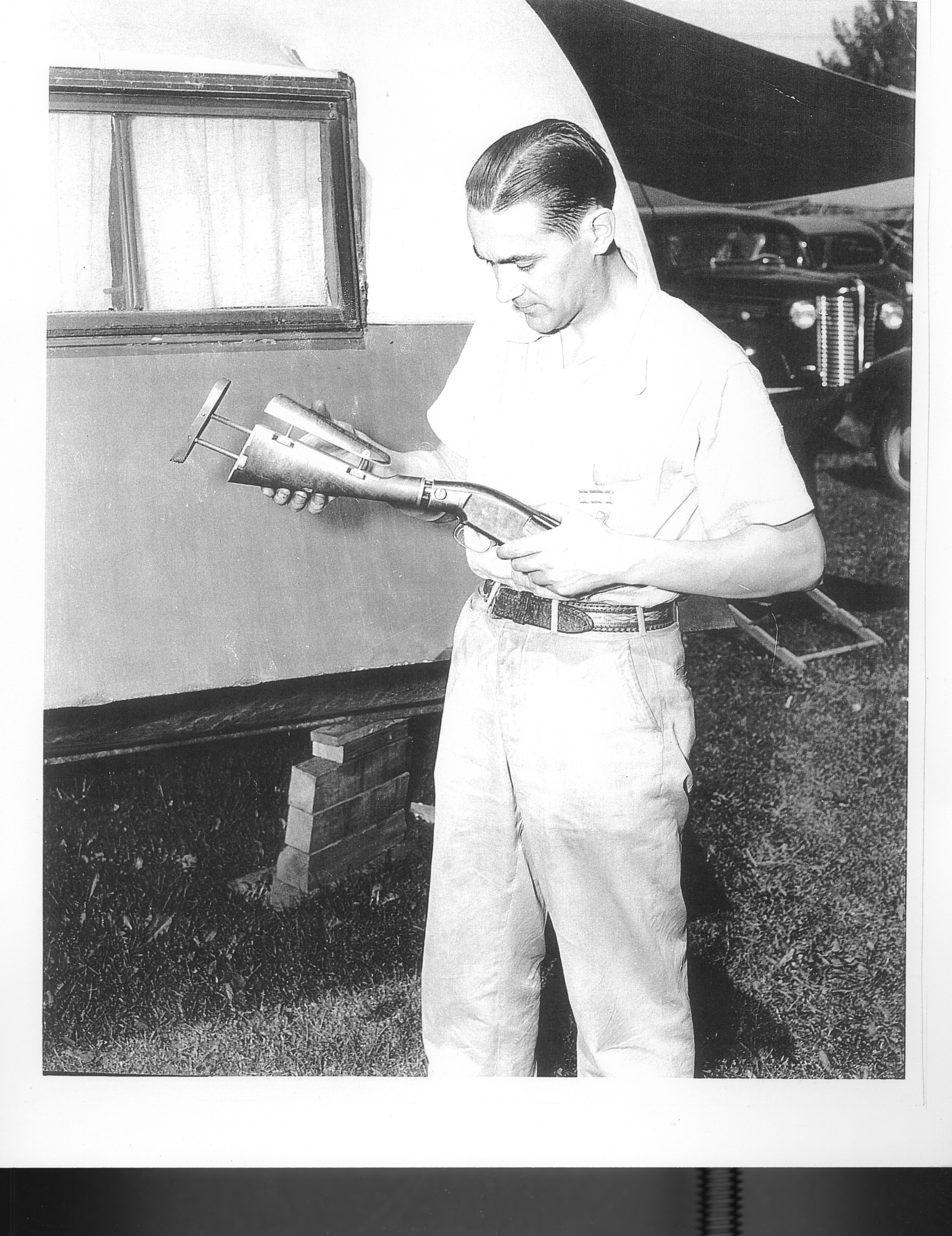 Herb, circa 1930s, holding a Model 12 receiver equipped with a try stock. Try stocks allow the gunmaker to get precise measurement of the critical areas of the stock to make the stock properly fit the customer. 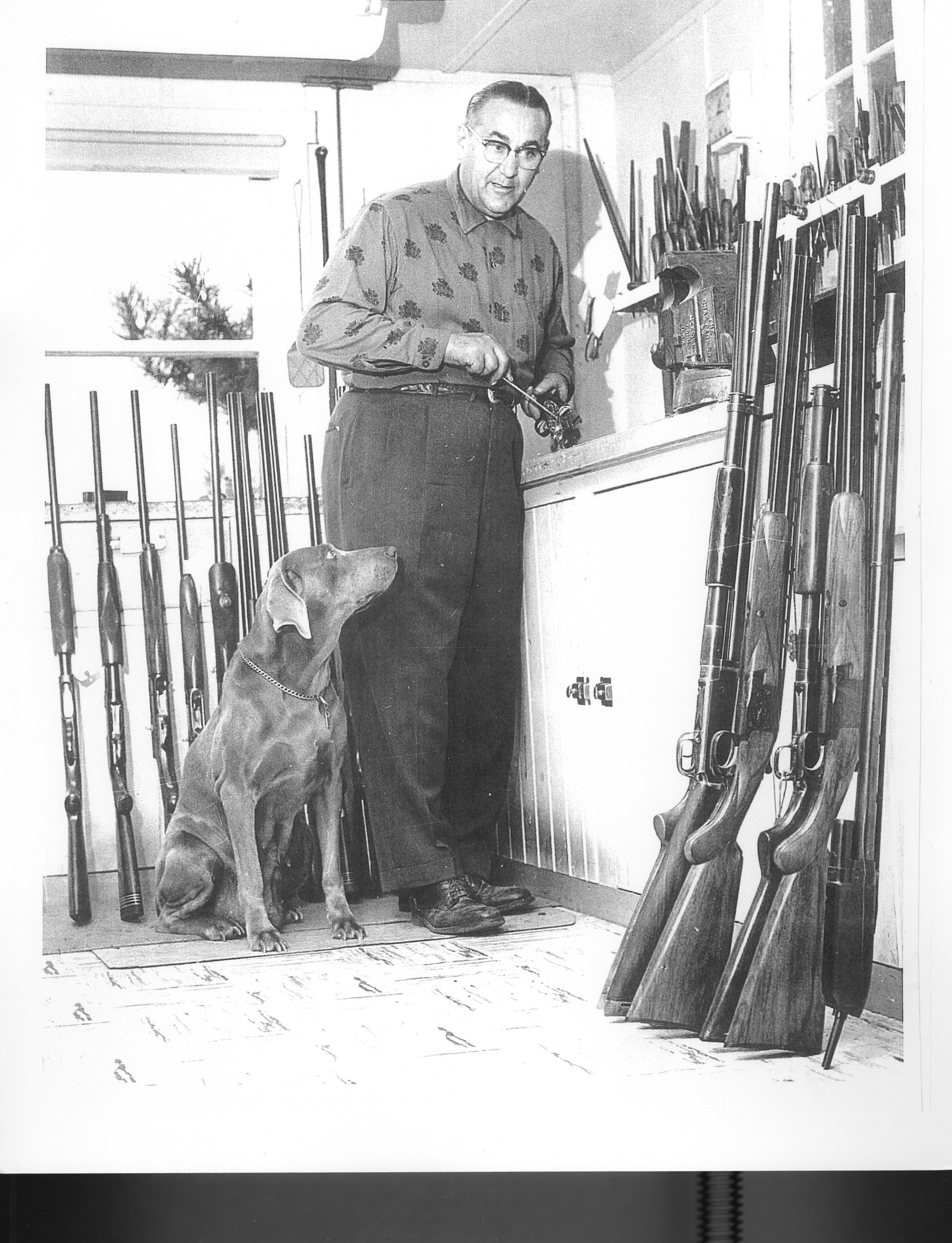 Herb in his shop in the 1970s with a friend. Herb could disassemble and re-assemble a gun and hardly glance at it, all the while talking to the customer. 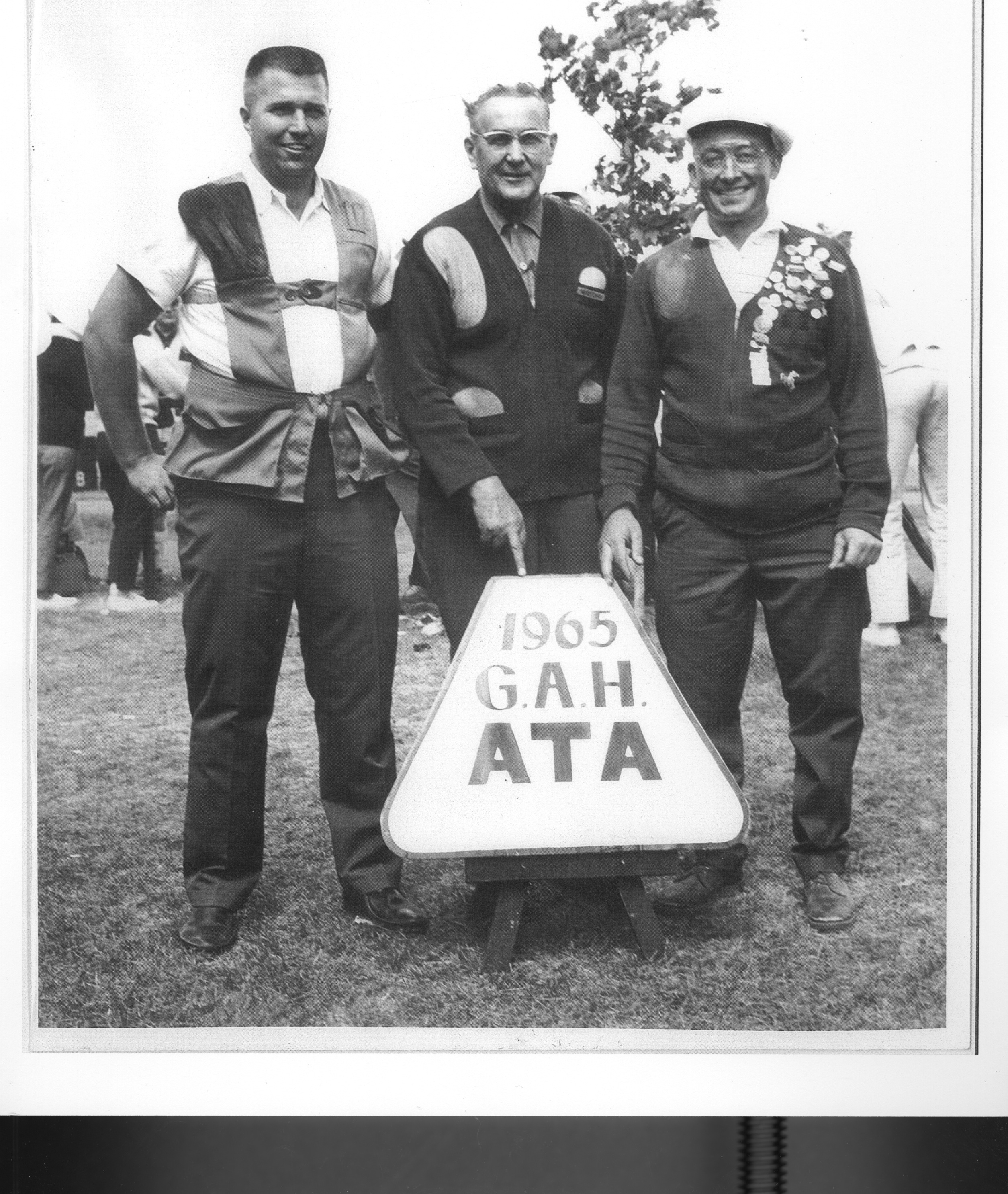 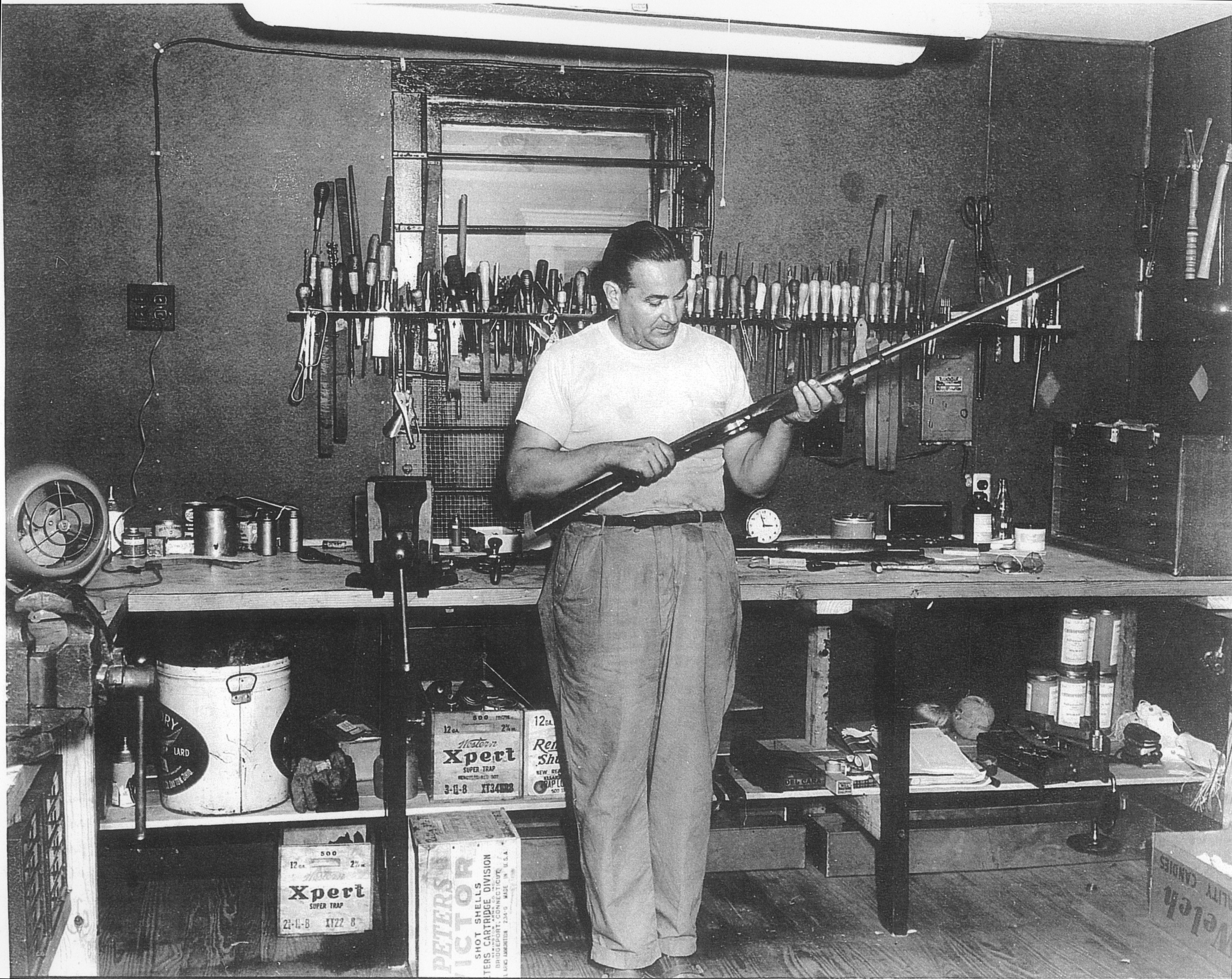 Herb in his shop at Camp Troy Gun Club in the early 1950s.

Herb Orre and the Super Choke

I am sure many of our present-day shooters have never heard of Herb Orre or for that matter, his Super Choke, but in the history of trapshooting he was a very influential and important person. In his years of choking barrels, it was often said he had broken more clay targets than any other man who had lived. Not that he had, but his Super Choke had broken the targets. He choked all models and makes, but if you had a Model 12 you shot trap with, you just had to have a Herb Orre Super Choke in it.

Herb was born Gustav Herbert Orre near Stockholm, Sweden, on April 25 in the early 1900s. The dates on his tombstone are April 25, 1910 and September 2, 1985, but I can’t actually document his birth year. Herb was born into a well-known and well-to-do family. His father owned shotmaking factories in Sweden, and his shot was recognized as possibly the best BBs in the world. Unfortunately, his business was forced to shut down around 1940 due to the looming war.

The information included in this story begins over 100 years ago, and I will be as factual as I can be. Some of the dates may not be exactly correct, but they will be close. With that said, I shall try to lead you through Herb’s life and fascinating career.

As Herb grew up, he was very interested in hunting and shooting. A highly regarded skier, he also won many awards as a skier, cross-country skier and ski jumper.

When Herb was 12 years of age, his father gave him a Model 12 Winchester. Basically, this brought into focus where this young person wanted his life to go. Shooting this gun and exploring the way it was built and assembled put a dream in Herb’s mind that one day he would go to America and get a job with Winchester, designing and building Winchester firearms. At the age of 19, having the equivalent of a college education and being the top student in his class, he decided it was the right time for him to follow his dream and come to America. This was done against his father’s wishes, but he was determined.

Reaching America and speaking only the Swedish language, he went to Winchester and applied for a job. Luckily, he had an uncle who was employed by Winchester and interpreted for Herb during his application and testing process. From the interviews and tests, Winchester found Herb had great mechanical aptitude, impressive knowledge of firearms and very high levels of mathematical skills. After this process, Winchester took a chance and hired this young immigrant as an engineer. In his tenure of over 20 years with Winchester, he held the titles of Chief Engineer, Head of Employment, Master Mechanic and ultimately became Head Engineer.

Not long after becoming a Winchester employee and becoming fluent in the English language, Herb designed some changes to the hammer and firing pin for the Model 12. He was instrumental in the firing mechanism design of the new side-by-side Herb, George Lewis and Frank Burton were designing. Winchester had discontinued the policy of numbering gun models according to the year they went into production, so what would they call the new side-by-side? One of his co-designers asked Herb how old he was, and he replied he was 21. The new side-by-side was named the Model 21.

Fairly early in his Winchester career, Herb started attending the Grand American in Vandalia, Ohio, as a Winchester gunsmith. In those days, they worked not only on Winchester guns, but they repaired all brands. This experience would prove to be very valuable to Herb after he retired from Winchester and started his private gunsmith business. During his trips to the Grand American, he talked with many shooters from across the country and around the world. During those conversations, he learned much about what the shooters wanted and needed in their guns, so they could better their ability to break targets. During those years, Herb started to envision how he could enhance a choke design to improve shooters’ ability to break targets.

During my conversations with Herb’s son, Allen Orre, and grandson Allen Orre, Jr., Allen told a story that happened during one of Herb’s stays at the Grand American. This had to do with the war, but I am not sure what year it was. There was an emergency at the Winchester plant and they needed to be back in war production in 24 hours, if possible. A high-speed Highway State Patrol escort was arranged to lead Herb back to Connecticut. This trip was across Ohio, Pennsylvania, New York and Connecticut. The Holland Tunnel was even shut down, so they could get through without any delay.

During his trips to the Grand American, Herb met a lady who was a cashier at the cafeteria at the shoot. Florence was a Vandalia resident, and in 1947 she and Herb were married. I believe this started Herb’s plans for retirement from Winchester, and in 1949 he retired. Even after Herb’s retirement, he continued to work closely with Winchester, such as being their gunsmith representative at shoots.

Herb started his own gunsmithing and barrel-choking shop in his father-in-law’s garage in Vandalia that same year. After a short while, he moved his business to the Camp Troy Gun Club where he operated until 1955, when he and Florence purchased a small 24-acre farm near Phillipsburg, Ohio, where he moved his business. He built his shop in one end of the barn. The rest of the barn was used by his wife to house her Palomino horses. He worked there until very shortly before his death on September 2, 1985.

Herb and his grandson still made trips to the Grand American in 1985. Herb’s Super Choke was probably the first aftermarket choke made for shooters to enhance their pattern and help their ability to break clay targets. If he wasn’t the first, he was the first to become famous worldwide. After moving to the farm, Herb received and sent so many of his customers’ guns the Phillipsburg post office had to move into a larger building, and the post office moved up a grade on the post office scale.

Not only was Herb extremely skilled with his choke work, he was extremely skilled at repairing all types of firearms. He made a very good release trigger for the Model 12. In one of the pictures from the 1930s, Herb is holding a try stock. This would have been one of the very first try stocks. The more I learn about Herb, I realize he was truly a pioneer in helping the clay target shooters raise their level of performance.

I started my ATA shooting in 1957, and it wasn’t long until I had a Herb Orre Super Choke in my Model 12, which was a nickel-steel field gun I had a Simmons aftermarket rib put on. In another Model 12 I acquired, I had Herb’s 16-yard choke put in. During my early ATA years, if I was at a shoot where Herb was working, I would spend time watching Herb work and listen to stories he told. Besides being a very good gunsmith, he was also a very good mentor to a lot of shooters. It was amazing to watch Herb take parts out of a Model 12 receiver and drop them on his bench, replace what was broken and seemingly just drop parts back in the receiver while chomping on his cigar and talking to the customer and anyone else close by — seemingly not paying much attention to the job at hand and doing it in not much more time than it took you to read the last few sentences.

I still have the Model 12s Herb choked for me, and I still shoot them sometimes at the little Sunday 50-target meat shoots we attend during the fall and winter and at the Federal Nostalgia Shoot. At our 1959 Ohio State Shoot, I won both the Junior 16-yard and handicap title, and in 1961 I was runner-up in the Grand American Handicap with my Herb Orre Super Choke. From Herb’s time as one of the pioneers of the aftermarket choke for target guns, just look at how this market has literally exploded over the years.

I feel really fortunate I have been able to travel through some of the same years of trapshooting Herb Orre traveled through. It was truly a blessing to the world of trapshooting in general, and the American clay target shooters in particular, that Herb chose to leave his home and family in Sweden and come across the ocean to America. In the beginning, I believe he charged around $40 per barrel. In later years, it was around $75. This is how I remember it. I believe Wright’s Inc. purchased the bulk of Herb’s gunsmithing and choking equipment and tooling after Herb’s death. To wrap up my story, in 1991 Herb was inducted into our National Trapshooting Hall of Fame. In 2006, Herb’s little white building was rescued from the Vandalia ATA grounds and moved to the Clay Township Historical Site.

In gathering information for this story, I need to thank many people. First, I want to thank Herb’s son, Allen Orre, and grandson Allen Orre, Jr. for sharing stories of Herb and for letting me have copies made of Herb’s pictures. Thanks also to Dave Brusman, Kenny Ray Estes, the Trapshooting Hall of Fame, Clay Township Montgomery County, Ohio Historical Society and my memory. This is just a bit of trapshooting history I am grateful for the opportunity to share with you. SS