How Do I Improve My Second Shot Recovery? 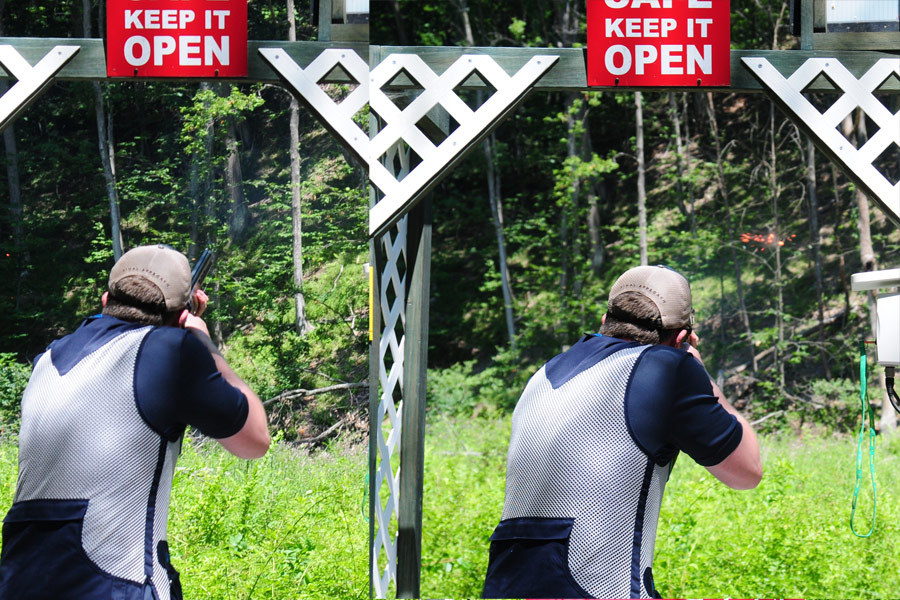 The shooter in these two photos is attempting shots on a true pair of targets with one being slightly lower and behind the other. In these photos, you can see he has good positioning, excellent hits and good follow-through on both shots. You can see the target pieces in each image. 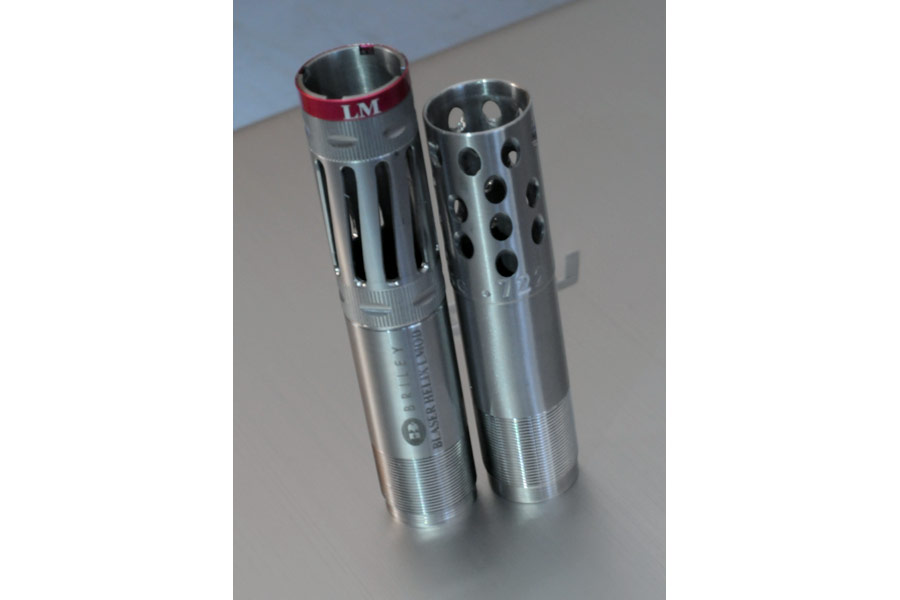 There are quite a number of sources to get a ported choke tube from, and most of them will tell you it will help reduce the effects of recoil, thus helping your second shot recovery. Not exactly. Ported chokes that are ported around the circumference of the body of the tube do not have much, if any, effect on recoil. They may affect pattern control some. 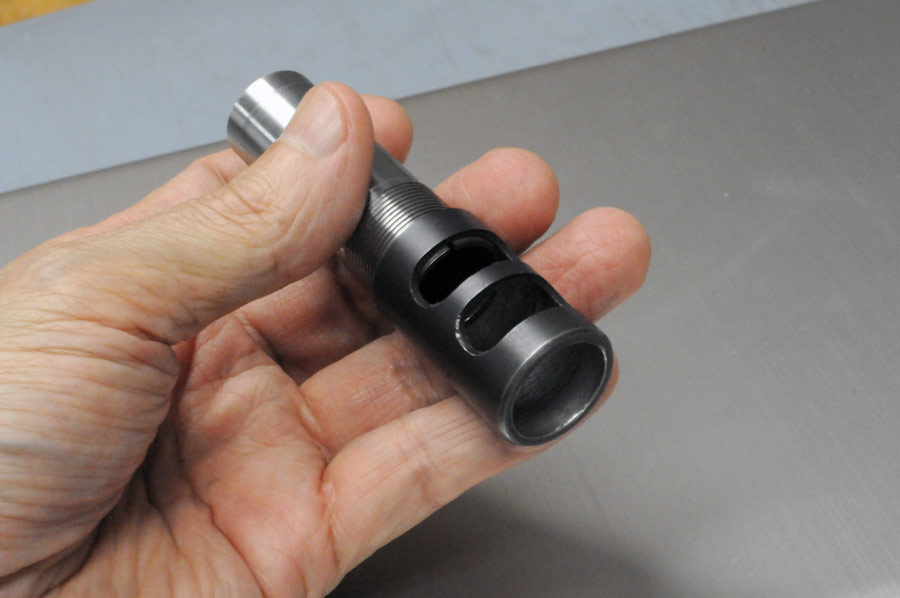 This choke tube is the only screw-in type of choke tube I have ever found that improves second shot recovery. The Comp Choke from Briley is an older item but can still be purchased.

How Do I Improve My Second Shot Recovery?

If you were to figure up all of the different kinds of missed targets you have ever fired on, which kind of shot would it be? Would it be the first shot of a skeet round? The first shot on a single Rabbit target? Maybe it is the first target of a pair or the second target of a pair. Aha! I thought so! All of my friends and acquaintances have far and away (myself included) missed more second shots on most kinds of doubles in all the years we have been shooting clay birds and live birds, too.

Let’s dive right into this troublesome target and see where most of us go wrong. The problem stems from our lack of control of our second shot as we attempt to recover from the recoil generated by the firing of the first shell. What can we do to improve our success rate? Well, there is good news and more good news. We can take advantage of some recent technical improvements and advancements as well as working harder on our game to score more frequently on both targets of a double.

Technical improvements are plentiful. There are many to choose from, and the good news is there is almost no bad news where this is concerned. A lot of companies have developed equipment that will help diminish the amount of barrel bounce generated by the first shot. This is the main culprit when we miss the second shot of a double. Why does this affect us so much? One reason is often poor technique, either with our swing, timing, stance or mount.

Timing has a lot to do with why we miss on second shots of pairs. Every shooter has his own internal, personal timing that automatically comes into play when our brain recognizes there are two targets we must pay attention to. The proper control of this internal timer is important to our rate of success. What is meant by that is we as shooters need to learn how to let the shot develop and pull the trigger either for the first or second shot when we recognize the shot has developed to our liking according to our timer.

As an example, when you’re at the skeet range or the sporting clays range and you’re practicing Doubles, does the timing of your pairs sound like “Bang..Bang”, two quick bangs one right after the other? Or perhaps it sounds more like “Bang……Bang”, with a noticeable increased length of time between the trigger pulls. The shot has to develop to the point where we feel comfortable with it through our eyes, meaning what we see out in front of us.

All shotgunners shoot differently, timing-wise. The important difference between the experienced and the novice shooter will be knowing there is nothing to panic about.

Most of us have watched skeet champions in an event shoot-off as they inkball targets one on top of the other out near the center of the skeet field. It is impressive looking and even sounds impressive as the two reports of the gun are hitting your ears with that quick staccato “Bang…Bang”. It’s impressive, and it is seductive. You want to shoot your Doubles just like they do. This can lead you down a rocky path in your shooting, believe me.

You will be much better off in your shooting to ignore the siren’s song of fast-sounding Doubles shots. Instead, train your internal timer to let the shot develop to where you are comfortable with the point where you take the first bird and then shift your eyes onto the second target with the gun barrels flowing, smoothing one shot to the other.

You say, “That sounds fine for the skeet guys, but I primarily shoot sporting clays. Will this work for me as well?” Absolutely! As you know, in sporting clays there are several types of pairs that may be thrown. There are True Pairs, which are launched simultaneously. You might be faced with a Following Pair, where the second target of a pair is thrown sometime after the first target. These can be both the same kind and size, or they might be different as to the type of target and the size of the target. Say, a Battue from one trap and a standard from another trap or a 90mm Mini and Rabbit target thrown together out from under you going away. The mix and match possibilities are many.

Being careful to make a clean and complete mount to your face and shoulder is also important for having your Doubles score improve, as are your stance and swing. If the mount is not clean and complete, you will have a tough time getting that shotgun in the right position on your shoulder to center your eye behind the gun. Without a properly mated face and gun, it’s pretty hard to make a shot with any consistency.

Your stance should be practiced and repeated, so you eventually unconsciously take your optimum stance that will allow total coverage of the flight path of the target.

Finally, your swing should be worked and repeated over and over. This type of repetitive training will have all the elements of your shooting grooved and engrained into your brain to the point they just happen when you find yourself in a similar situation attempting these types of shots.

I mentioned technical improvements that can help with second shot recovery. Some of these improvements are based on minimizing the upward barrel bounce that occurs when a shot is fired.

So what are these technical improvements? One kind has been popular for many years. It’s good, old, trusted and tried barrel porting. Offered by many companies, barrel porting works on the simple principle of relieving some of the gas that propels the shot column. Doing this in a direction opposing the bounce of the barrel, and you end up with less barrel bounce and a smoother, faster second shot recovery. Barrel porting comes in many shapes and patterns from simple round holes and only a few in a muzzle to teardrop shapes, ovals and trapezoids with many holes in the bottom and/or upper barrel.

Some people only port their bottom barrel while others will port both the barrels of an over/under. I have discussed this with shooters who make use of porting. The general consensus seems to be that since they always shoot the bottom barrel first and there is no third barrel to save against barrel bounce, they port only the bottom barrel. Those that do port both tubes do that because they often shoot the top first. Even though most semi-automatic shooters enjoy softer recoil and less barrel bounce than over/under shooters, the semi-auto enthusiasts often port their barrel to benefit even more than they already do with regard to the recoil factor and barrel bounce.

There are those who make use of ported choke tubes as another method of squeezing another ounce of recoil reduction and less barrel bounce. In my mind, the ported choke premise has more to do with pattern control than recoil or barrel bounce reduction. The reason I say that is because most ported choke makers cut the ports into the walls of the choke all the way around the circumference of the choke. This is not giving you optimum reduction in either recoil reduction or barrel bounce. This style of choke tube may be providing you a little bit of pattern control by having the inside edges of the port cuts scrape the outer walls of the wad. When this happens, the wad is pulled away from the shot column. This allows it to develop to its potential as it travels toward the target without the interference of the wad. There are quite a number of choke tube companies who produce ported chokes.

There is a design of screw-in choke that actually does reduce barrel bounce noticeably. It is a choke tube made by Briley Mfg. in Houston, Texas. It is called the Comp Choke. It is an older product in the Briley line-up, but the Comp Choke works. If you want to try one for yourself, give Briley a call at (800) 331-5718 and order one. It makes no claims to reduce recoil, but I feel sure you will see and feel a difference in your second shot recovery.

I know a properly fitted stock has been touted as a panacea for everything from missed clay targets to the common cold. But improved second shot recovery is something probably not promoted much when talking about the benefits of a fitted stock. It’s kind of a freebie.

Some of the simplest ways to improve second shot recovery is the use of barrel weights. Don’t go crazy and prescribe to the “If one is good, then two or three must be better” theory. It usually is not.

Let’s summarize: Remember, in your training on pairs to let the (second) shot develop with your eyes and use your internal timer. Do not try to look and sound like the big dogs you have watched in skeet shoot-offs who inkball targets in the center of the skeet field and go bang…bang fast, one shot right after the other. You want to hit the target, not miss it quickly. A slower cadence between each hit target is much more impressive than a fast miss. Porting your barrels can be a benefit as can a well-fitted stock and ported chokes. And, remember simple barrel weights can help improve second shot recovery and increase your scores on the most-often missed target for many shooters, the second shot on pairs. Here’s to better scores for you. SS