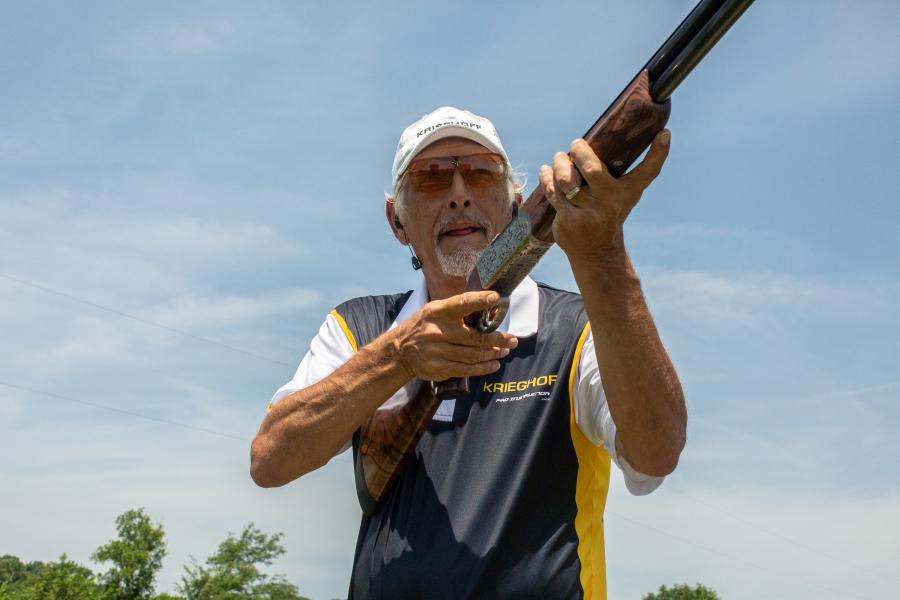 Terry Hetrick is a partner in Double Guns of Nashville. He turned his love of shooting instruction into a successful venture with his partner, retired banker, Barry Rich. 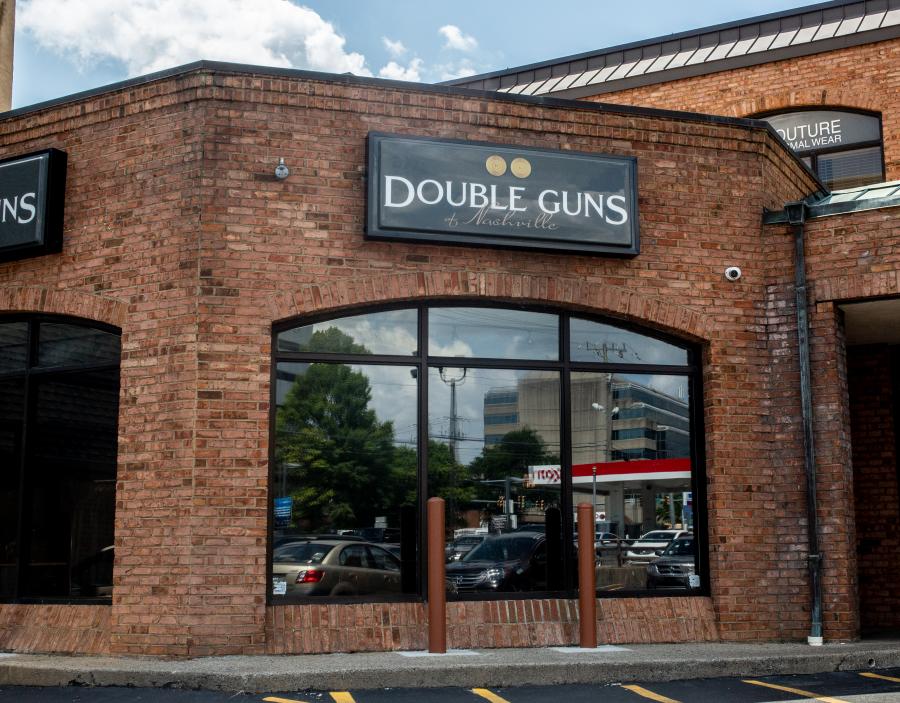 Double Guns of Nashville offers fine guns and apparel for the discriminating shooter and hunter. 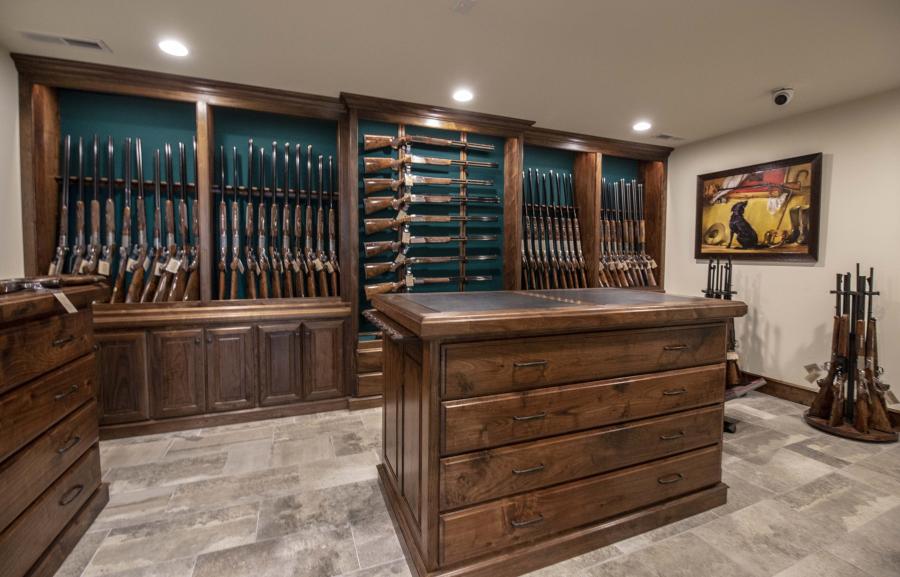 The beautiful gun room at Double Guns of Nashville is actually a bank vault.

Interview with Terry Hetrick of Double Guns of Nashville

In April of 2016 a new high-end gun store opened its doors in the heart of Nashville, TN. This new exclusive shop which offers such renown names of Blaser, Cosmi, Giulio Bernardelli, Verney-Carron, Rigby, Mauser, Krieghoff and Zoli, to name but a few, is Double Guns of Nashville. The proprietors are Terry Hetrick and Barry Rich.

Terry Hetrick retains an extensive history, in the shooting industry not the least of which is the Terry Hetrick Shooting School which he began in 2001. Terry includes in his client list students ranging from first-time shooters to the highest level of competition/professional shooters. He also is one of two Krieghoff Pro Skeet Instructors in the country.

I spoke with Terry about his latest venture and his vision for Double Guns of Nashville. Here is the bulk of that interview.

Johnny: Terry, how long have you been in the industry?

Terry: I began in 1991 when I took a position with the National Skeet Shooting Association in San Antonio. I was with them from 1991 to 1993.

Johnny: What was your position there?

Terry: I was the Special Projects Manager.

Johnny: Where did you go from there?

Terry: From there, I went to Houston, Texas. I joined up with a company you might have heard of — Briley Manufacturing.

Johnny: Yes, I seem to recall hearing their name a time or two mentioned over the years. What were your responsibilities there?

Terry: During the week I was a salesperson, taking calls from customers trying to sell chokes and tube sets. Then on the weekends, we would pack things up and head to a shoot somewhere. I stayed with Briley until the fall of 2000.

Johnny: Where did you go after that?

Terry: From Briley, I came up here to the Nashville Gun Club. I always had the dream of teaching full-time. I taught part-time while working at Briley in the evenings and weekends. I taught at the Greater Houston Gun Club. I kept that up until the fall of 2000. Once I got here, I went to work at the Nashville Gun Club, eventually became the resident Pro, and I have been up here ever since.

Johnny: That’s a long time to be in any one place, partner.

Terry: Yeah, I hear you.

Johnny: So what’s your association with and how did you become involved with Double Guns of Nashville?

Terry: Basically, we had a lot of luck with teaching here at the Nashville Gun Club. I had a pretty good following of clients and always doing something to promote ourselves. As luck would have it, that is about the time Dieter Krieghoff approached me. It seemed he was looking for someone to promote and move his guns in this part of the country. From there, I was contacted by my-now-partner in Double Guns of Nashville, Barry Rich. He had a successful career in banking, was also a skeet shooter, and even though he was retired, he wanted to do something extra. So we partnered up and formed Double Guns of Nashville. We now have one full-time and four part-time employees.

Johnny: You and Barry Rich are full-time partners?

Terry: Yes, Barry and I are full-time partners.

Johnny: I read in one of your ads about the brick-and-mortar Grand Opening of Double Guns of Nashville.

Terry: The way that came about was we actually started our venture in a temporary building at the Nashville Gun Club. We started out in the summer of 2016, and then in November of last year we moved to our permanent location on West End Avenue in Nashville.

Johnny: That’s a stand-alone building or part of a complex?

Terry: There are several other businesses in that mall, but we are the largest of the ones there.

Johnny: Obviously, you sell nice shotguns. What brands do you sell?

Johnny: Where do you see the business growing? Do you envision it growing and needing a larger building?

Terry: No, actually we’re in pretty good shape right now. You see my partner, Barry Rich, being a retired banker knew where we could buy a bank vault. When you come into our Gun Room, you are inside a bank vault. We have our soft goods, like clothing, boots, jackets, vests, blouses, etc. in the main part of the store — the showroom. The Gun Room, however, is actually a bank vault.

Johnny: Terry that sounds like a very nice showroom and Gun Room.

Terry: Yes, it is. We have decorated it with some very nice art created by local artists. You might also mention to your readers we carry John Rigby rifles and Mauser rifles.

Johnny: What other brands of apparel do you feature in your store?

Terry: Our three main brands are: Barbour, Boyt Harness and Alan Paine. The Alan Paine is a London-based clothing line.

Johnny: Terry, I had a great time speaking with you about your store, Double Guns of Nashville. Here’s hoping you and Barry have nothing but success. I want to thank you for taking time to talk with me today. The best of luck to you.

If any of our readers ever find themselves in the Nashville, TN area and would like to check out some beautiful guns or clothing, you can’t do much better than to visit Double Guns of Nashville at 3404 West End, Suite 106, Nashville, TN 37203 or call them at (615) 651-4690. When you are there, be sure to let them know you read about them in Shotgun Sports. SS