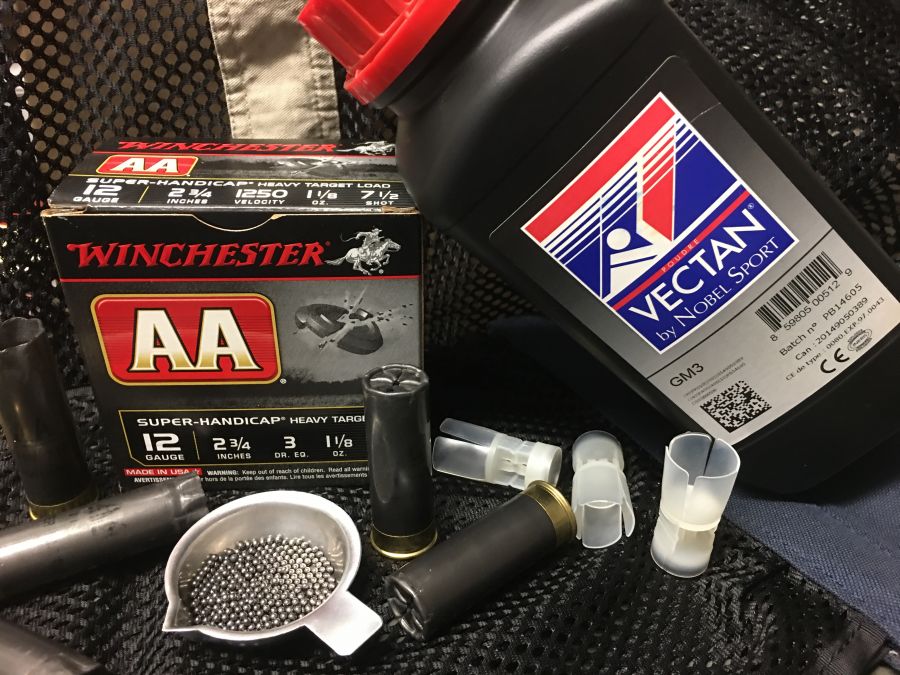 Going the Distance: Extended-Range 12-Gauge Target Loads
It’s an inevitable scenario: the sporting clays course has a simultaneous pair in which one target is nearly out of range before a shot can be taken at it or the head-scratching clay that begins and ends its journey at considerable distance. Regardless of the presentation, my response is the same

— 1 1/8-oz. load optimized for distance shooting. In competitions where I cannot use handloads, I reach for one of the following options: Remington STS (or Nitro 27), Winchester AA Super-Handicap Heavy Target or Federal Premium Gold Medal Grand. All have similar traits.

First, each of the abovementioned loads utilizes premium, high-antimony lead shot. Few companies disclose the exact composition of their shot, so comparing them apples-to-apples is difficult. Fortunately, several shotgunners with the means have closely examined pellets from some of the biggest names in shells and component shot, and the results are posted on popular Internet forums. For the most part, the results aren’t earth-shattering; few companies use antimony percentages exceeding five— Remington STS is advertised as 6% — with most “premium” loads being in the fours. Valued-priced shells infrequently have 3% antimony or higher. That’s because antimony is costly. Therefore, as the axiom states, “you get what you pay for.” The same logic applies to component shot.

High-Antimony shot is desirable for distance work because it’s less likely to become misshapen during setback and while traversing the bore and choke. Therefore, fewer pellets migrate to the fringe of the pattern, giving you a denser pattern at-distance. Increasing the antimony content decreases density, however, so a high-antimony pellet will weigh less than one with a lower percentage of antimony. To offset the weight difference, the payload can be propelled faster — though high velocity isn’t always required. More on that later. Some shrewd shooters prefer a mid-range antimony content, as the heavier pellets carry additional energy to the target and deform upon impact, better imparting their energy on the stout, biodegradable clays.

Since I’m focusing on distance work, I will suggest using #7½ shot to 8s. Sure, you have fewer pellets to work with, but each carries extra energy to the target. This ensures no unbroken target is due insufficient energy. In a 1 1/8-oz. payload of magnum #7½s, there are approximately 394 pellets —plenty to work with.

Wads for long-range shooting must be thoughtfully designed, too. Ideally, the wad will have thicker petals for more constriction (when combined with a shotgun’s choke), and the shorter the cuts (or deeper the shotcup), the tighter the pattern. Concerning the former, a choke with greater constriction will be needed for optimized patterns at long range; the shell itself is but one part of a system. For the loads mentioned elsewhere, their one-piece wads—the Remington Figure-8 and Winchester WAA12 (or their clones) — are widely available. However, such is not the case with Federal’s newer, rigid two-piece wad with SoftCell technology. That’s unfortunate, as its composition, slits and thickness lend to very dense patterns at extended ranges.

You’ll note I didn’t expound on specific propellants, primers or even velocities. That’s because, as an over/under shooter, I feel they’re of little importance when compared to the shot (size and composition) and wad. Cleanliness isn’t a pressing concern, as I swab the bore after each range session, and proper ignition of fast-burning target loads isn’t difficult. Additionally, I’ve used factory subsonic loads to cleanly break clays at ranges beyond 50 yards, so velocity isn’t as important as many believe. Will it help with lead? Sure. I prefer velocities between 1,200 and 1,250 f.p.s. And, as effective as my go-to loads are, I see no reason to change at this point.

When selecting a recipe, ensure all components fit and a secure, factory-quality crimp can be applied. Anything less can affect feeding and/or the ballistics. To ease the process, select components that are designed for the hulls you’re using. I prefer to use Remington wads with said hulls, and the same goes for Winchester. Although some consider it sacrilege to combine Winchester and Remington products, you’re good to go provided the recipe calls for such. Wads for tapered hulls aren’t the best choice for straight-walled hulls.

In replicating the 3-dram Remington STS 1 1/8-oz. shell, I begin with the company’s Nitro 27, STS, American Clay & Field or Gun Club hull — all are interchangeable, though the former two have greater longevity and offer easier loading. Parity with the factory load is achieved with the following recipe from Alliant Powder:

This recipe provided an exceptional fit, with the loaded STS shells visually matching their factory brethren. Additionally, according to the Competition Electronics ProChrono Digital chronograph at 3 feet, from the 28¾" barrel (with extended, modified Invector-Plus choke tube) of a Browning Citori, the load averaged 1,212 f.p.s. Through the choke, this mild-manner round provided good results on paper out to 40 yards—maybe a smidge further.

A second recipe using the Remington STS hull was found on Hodgdon’s website. It called for the following:

Unlike the previous recipe, this one was somewhat disappointing. It required an overshot card (or filler wad) for a solid, even crimp, and the chronograph revealed it fell noticeably short of the purported velocity. Not all was bad, though; the 1,132-f.p.s. load was very soft on the shoulder but hard on the targets. It’d be good for those especially sensitive to recoil.

Matching the 1,250 f.p.s. of the 3-dram Winchester Super-Handicap Heavy Target shell results in an exceptionally tight fit, regardless of the propellant you select. This is no different than the factory load; disassemble one and you’ll see a wad that’s been heavily compressed. The first recipe, which was found in Vectan Powders Reloading Data, turned to be among my favorites for crushing distant clays. Here is the recipe:

From the top barrel of the Browning, this load averaged 1,247 f.p.s. — virtually identical to the factory load. Moreover, it seemed softer on the shoulder than the original loading, and the results at 50 yards were respectable, even from a modified choke. Through an Improved-Modified or Full choke, this one would reach as far as you’ll need.

Also using the Winchester AA hull was this recipe, which was found on Hodgdon’s website. Given the space occupied by Hodgdon International propellant, the fit was especially snug.

With a mean velocity of 1,266 f.p.s., this load exceeded published numbers slightly. On-target performance differed minimally from the previous load, but felt recoil seemed greater. All in all, it’s a good — but tight-fitting — option.

Plain and simple, mimicking the performance of the Federal Premium Gold Medal Grand cannot be done at this time, as the new wad is unavailable to consumers. That said, the hull can be utilized to create a few especially hard-hitting options. Two of my favorites for crushing distant clays are found below, and both utilize the discontinued 12S3 wad. However, clones of the wad are readily available and equally effective. The first recipe was found in Vectan Powders Reloading Data.

When compared to the previous recipes, this one’s 1,207 f.p.s. velocity belies its downrange effectiveness. It hammers clays and, even with a Modified choke, gives enviable patterns at 50 yards. Through a tighter choke, there’s little doubt the shell will give you everything you need performance-wise for far shots. Of the group, this was a real standout.

The last option came from Alliant Powder’s website. It called for the following:

Because of the smallish propellant charge, this one requires an overshot card or filler wad for a perfect crimp; otherwise, it’ll be somewhat dished. The mean for this mild-recoiling load was 1,216 f.p.s. Like its brethren, this is a good option for those far-springing clays or the second shot on a fleeing simultaneous pair.

If you’re a sporting clays shooter, it pays dividends to have an ace in the hole for those especially challenging stations. A few of these are certainly aces; pick one to complete your hand. SS

Aaron Carter penned his first article, “Gunning for Geese,” for NRA Insights magazine at age 16. Since that time, he has written several hundred articles examining handloading, firearms, hunting and history for a variety of magazines and websites. Many of his works have earned great acclaim, including MarCom and Hermes Creative Awards, and in 2013 he won the Ian McMurchy Award. Carter spent 15 years working at NRA Publications, where he refined his writing and editing skills and, in time, became managing editor of American Rifleman magazine. He left his position at NRA in 2015 to begin another career, though he continues to freelance widely. When not writing, Carter can be found working up loads, competing in sporting clays, FITASC and other shotgun sports, hunting big and small game throughout the country, and spending time with his wife and sons, who share many of his same interests. A native Virginian, he currently resides in the burgeoning northern part of his home state.

CAUTION: Read the notice and disclaimer on page 4 of this magazine. Always consult comprehensive reference manuals and bulletins for details of proper training, requirements, and procedures, techniques and safety precautions before attempting any similar activity.

NOTE: Pressures are often listed as "p.s.i." or "l.u.p." values. You may find different pressures listed for the same load in different handloading manuals. They are not the same. In general, p.s.i. values will be about 1,000 units higher than l.u.p. values. This applies to lead-shot loads only. There are often considerable differences between the p.s.i. and l.u.p. values with steel-shot loads. Also remember there can be differences in how loads act in various test guns and equipment that can also affect these readings and the values published.