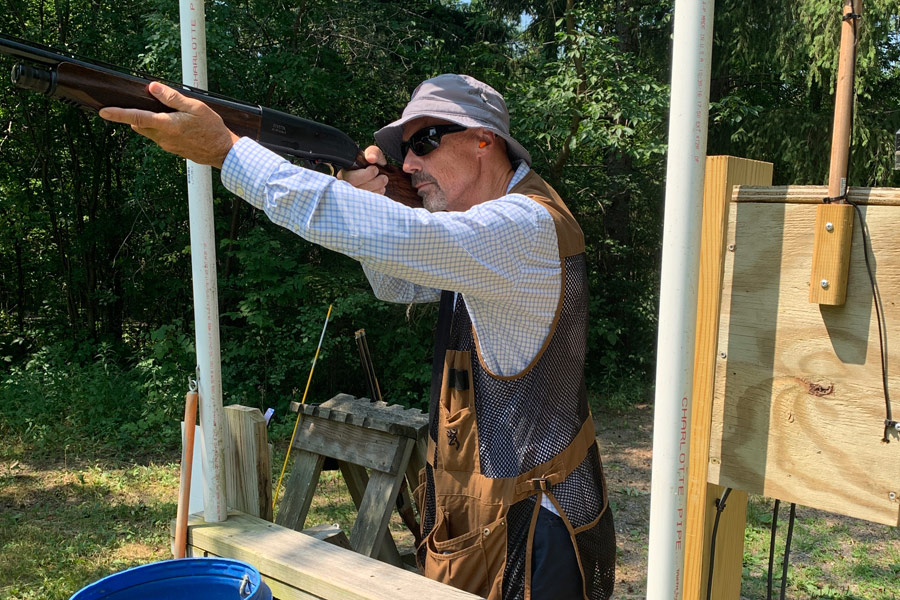 Dave Buschner at the Canandaigua Sportmen’s Club in New York.

My friend Dave and I were engaged in our usual Wednesday sporting clays shoot when we came upon a station I immediately disliked. “I’m not going to shoot this one,” I told Dave. “I can’t ever do well, so I’ll just let you shoot.”

Since it was my turn to pay for the station — our club has a system in which you use a prepaid card for targets — he told me I had to shoot. Otherwise, he would have to make it up to me somehow. In reality, he just wanted to see me shoot at a target he could hit.

At least, that is what I thought. Actually, he wanted to see what was going on with a presentation I hated. He told me to shoot, and we would work through it.

The target, which is a long, shallow crossing shot, is not that hard. I consistently miss it by shooting behind because I fail to lead it enough. Because I miss it, the second part of the report double ends up frustrating me, too. If I just shoot the second shot by itself, which is a much harder, very fast crossing shot, I usually break it. I had a psychological block when it came to the first of the pair.

“You defeated yourself before we even reached the station,” Dave told me. “We have to do something about it.” Dave proceeded to shoot the target while telling me the basics of the shot including hold point, pickup point and lead. Then we sat down and talked.

“You can make this shot. All you have to do is pay attention,” he said. He noticed when we approached this station, my gait changed and my usual banter with him had stopped. I had developed an automatic thought pattern that took me out of my routine and negated my pre-shot ritual of visualizing the target and setting myself up to automatically shoot the target when things were right. As a result, I ignored the target and failed to anticipate where it would be letting my barrel get too far behind. All the basics were lost on this target.

I sort of knew this, but even with the knowledge I was shooting behind the target, I could not hit it the first time out.

We practiced on this target after our little talk, and I was able to rectify my mistakes. But it made me wonder why I was having such a hard time with this target which is not much different than a lot of others I can shoot well.

What I hadn’t realized before was the truth in the remark Dave made about my missing the target well before we even got to the station. There were events that had occurred in the past whose consequence was my missing the target on a regular basis. This was due to the negative thoughts I had coming to the station. More importantly, those thoughts didn’t come out of the blue; they happened every time we came to this particular presentation. There had to be something more to why I hated the target so much.

After a little research, I realized there was a method I could use to find out what was going on called “chain analysis.” This is a technique used in market research and certain types of psychotherapy that is both analytic and predictive. Basically it says, actions have consequences and all actions are the result of a chain of events and choices. When things go right, you can usually point to some prior actions to explain why. The same is true when things go wrong, but most people are reluctant to find out why when it comes to performance. They prefer to see these problems as one-off and due to an immediate cause, even if it is a chronic problem.

As I mentioned before, the particular shot in question was not difficult. Dave showed me how to shoot it, and we were successful in getting me to consistently break it after a few tries. I managed to deal with the automatic thinking I had developed by being successful and, after a little soul-searching, realized my adverse reaction was due to a series of failures with that target that eventually lead to my not even wanting to shoot it.

What happened to me is a good example of why steps in the chain are so important for performance.

I’ve discussed why good training relies on a strong set of basics and using them to fine-tune performance. If there is a hole in the knowledge and skills, you will find that hole just gets bigger as you focus in on the small adjustments that have to be made if you don’t fill it first. Perfection requires total concentration, and you can’t do that if you are missing one of the basics of your skill set. By introducing a glitch into the chain, you divert the whole performance in a bad direction.

In my case, it started the first time I saw this target. I was tired, my glasses were fogged up and I didn’t use any of the skills I had. This set my brain to see this shot as being much more difficult than it really was, and that feeling deepened each time we shot it. I failed to see it as a challenge the way I dealt with more difficult shots on this course.

I had two choices: I could ignore it and hope they changed the shot, or I could do something about it.

Chain analysis examines the flow of actions that lead to an event in order to optimize the steps and to find alternatives when things change. In industry, they may look at the cost of supplies, manufacturing costs, the market and a host of other variables in order to create value for the company.

While this is yawn inducing to anyone not interested in business, the kernel of the idea is if there is something in that chain that causes that value to be diminished, you have to recognize and fix it.

For shotgun shooters who want to continue to improve, just knowing some problems are not due to an immediate cause is a benefit. You don’t consistently make the same mistake because of some environmental issue during a match, especially in a sport that has a small range of variables like skeet. It has to be something a little more fundamental, and it may be something very small that causes deviations in performance.

The business schools call this a value chain. They look for glitches that can affect the bottom line. Competitive shotgun shooting doesn’t have as many wide-ranging variables as business, but it still has a performance chain to evaluate. Fortunately, this is not rocket science.

The first thing you need to do once you identify a problem is to look very hard at how you were reacting before and after a consistent problem. The misstep has to be consistent because that consistency is a flag that it exists because of something upstream to the performance itself.

Usually this is related to some change in emotions or tension in the body that acts as a bellwether and often brings on an automatic thought that diverts you from your regular approach to shooting. The trick is to find a pattern, then determine why that pattern exists.

One of the best ways to deal with this is to go through a checklist comparing your usual shooting routine to the one that happened with the problem. While this won’t give you an answer right away, you can use it to think about what you need to do in a quieter time. A shooting diary with some sort of quantification of feelings, videos, running averages, etc. is very helpful in these cases, as it lets you see long-term trends.

You might find several problems with the chain which are related to one another. For example, if you don’t have a consistent mount or you don’t regularly practice the crucial shots of your sport, you can’t expect a consistent performance in those shots. One of the most common things shooters do for practice is to shoot a round of whatever and call it a day. This fails to take into account a number of things, including the need for repetition and a goal-focused practice that causes improvement on a wholesale scale.

When Dave had me bear down and repeat the shot a number of times, I was able to get away from my automatic thinking and have more insight into how the shot had to go.

If you start with the problem and work backward, you can usually find the cause of a problem quickly. For consistent glitches, there is usually a basic issue such as footwork, mount or follow-through. In those cases, identifying what is going on might require an outside eye to spot it, but once it happens, you should be able to fix it.

Another important part of chain analysis is to monitor those steps that cause a problem and not forget them because you “fixed it.” Very often that step has another earlier event that helped form a pattern and, while it is probably not necessary to deal with the early step, you need to know by finding a working solution you still need to repeat it over and over in order for it to become automatic and put the old pattern aside.

Think of chain analysis as a process that is both common sense and powerful. Every action has a reaction of some sort. Good and bad things don’t happen by themselves, they need antecedents. We do a lot of stuff to make sure we are good shotgun shooters, and every so often we make mistakes. Fixing them is part of improvement. SS

Dr. Keyes has written over 250 articles on mental training for Shotgun Sports and is author of the book Mental Training For The Shotgun Sports available on page 46. He is a former physician for the U.S. Shooting Team, retired Colonel from the Army Reserve and a veteran of Viet Nam and Desert Storm. A Tennessee state pistol champion and coach of several national championship teams, he is retired from his practice in Victor, New York. You can e-mail him at michaelkeyes12@gmail.com.