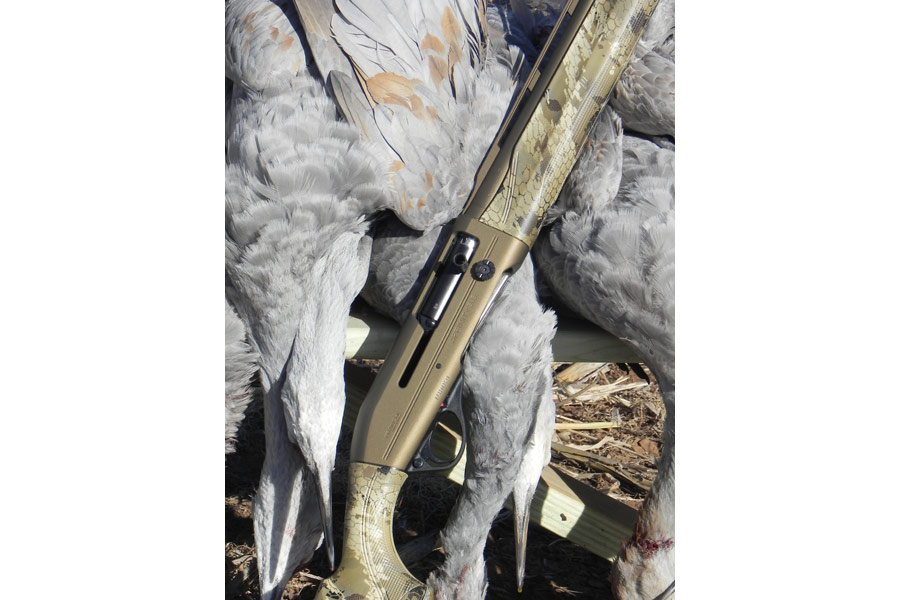 A lone shot of the Affinity 3 Elite 12-gauge autoloader. In this view, you see the Camo in Marsh Optifade as well as a new Cerakote finish in Bronze for all the metal surfaces. 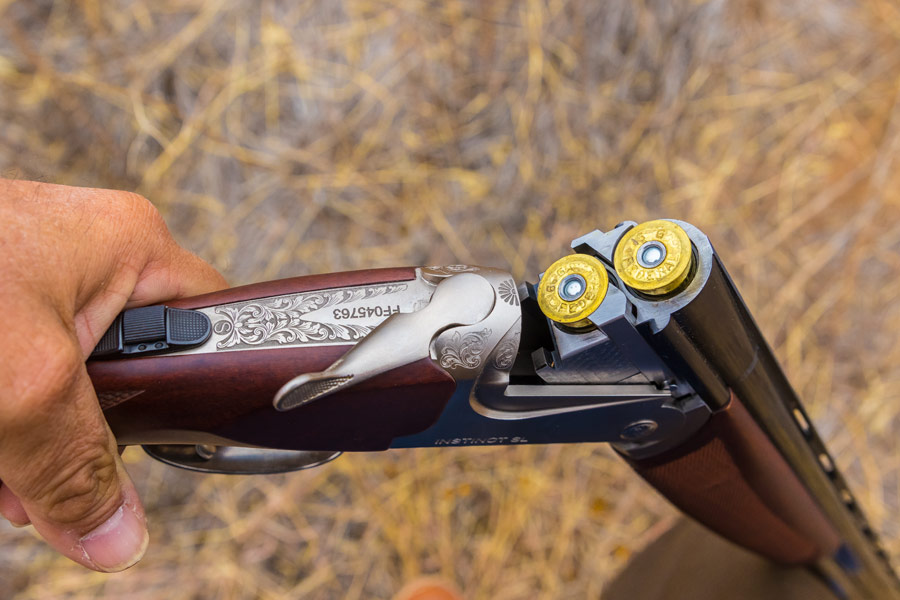 A nice, tight look at the top of the open receiver of the Franchi SL16. 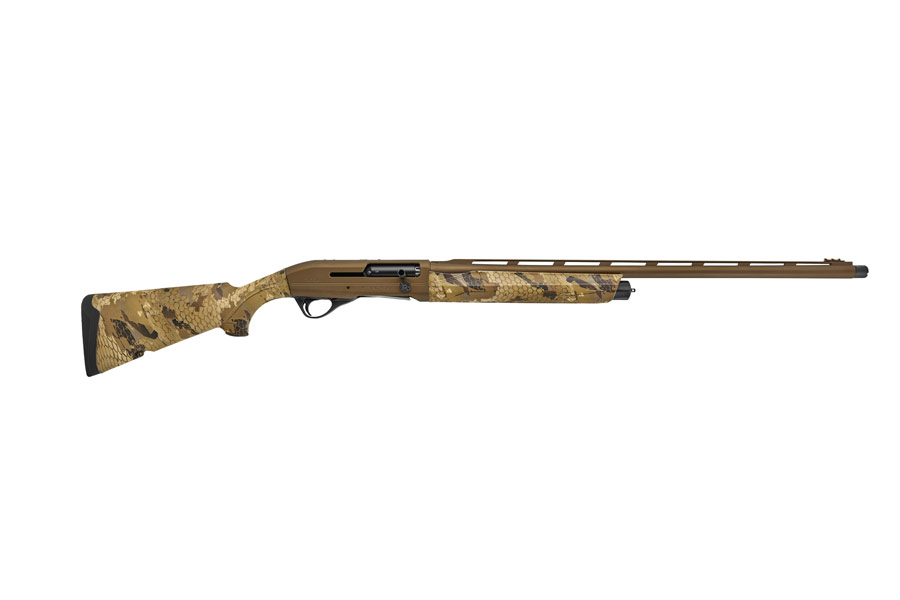 A full profile view of the Franchi Affinity 3.5 Elite. Here you get to see the oversized charging handle as well as the action/release button plus the stepped rib, extended choke tube and fiber optic front sight. Photo courtesy of Benelli USA 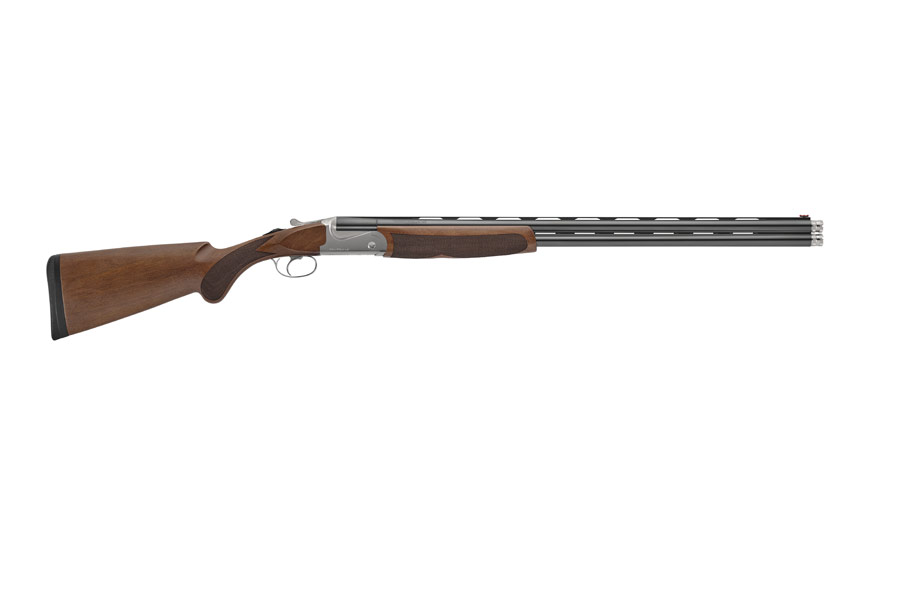 The Franchi Instinct SL16 shows unique styling with the Prince of Wales grip as well as the shortened Schnabel forend. You also see the low-in-the-receiver centerlines of the barrels which gives you one of the main reasons why the gun fits your hand so well. This is a well-styled gun but remember at only 5 lbs., you will welcome carrying it more than shooting it. Photo courtesy of Benelli USA

I was offered a hunt by the Pros at Benelli USA and Franchi to introduce two new offerings available for late 2019 in Lubbock, Texas, baiting me with a chance at Sandhill Cranes and upland birds for a real test drive under the usual dryland conditions out in the South Plain area of west Texas. Never one to pass a first look, I selfishly accepted.

Our host and outfitter was Tejas Waterfowl, who runs expert goose, sandhill crane and duck hunts from Canada to Texas. They were total professionals with a new blind they designed and built that was towed to our location for each morning hunt. Our guns provided by Franchi would be the new Affinity 3 Elite 12-gauge autoloader and the new 16-gauge Instinct SL O/U. Our first night together had all of us drooling as we handled the offerings and discussed features at the lodge. Federal generously provided the 12-gauge SST 3" Blackcloud in BB-size shot, as well as 16-gauge lead 6s for our hunt.

The Affinity 3 was dressed in Marsh Optifade on stock and forend, which are synthetic and extremely trim and low in the hands plus a new Ceracote finish in Bronze for all metal. Sureshot oversized bolt handle and bolt release are features seen on sporting clays shotguns but are extremely beneficial with gloved hands and very well-designed! The Affinity 3 comes with a shim set allowing a custom fit for left or right hand as well as drop. Three Trulock extended chokes are included for close, midrange and long-range shooting, I used the midrange the first day as the birds decoyed well, but changed to long range as I felt like these big birds needed more BBs in the boiler room. Patterns were excellent as expected from George Trulock products.

Also standard is the dual-color fiber optic bar front sight from Truglo®, which really captures the sight picture in low-light settings. The 3" chamber with a long forcing cone and TSA recoil pad round out the custom features right out of the box. Obviously, the base mechanics are born from Benelli’s inertia system used on the fabulous SBE series, but with a very refined receiver profile including oversized ejection port as well as oversized loading port. Recoil pulse was very mild even with the magnum loads we shot and allowed for super-fast second shot recovery, even at 7 pounds. Rear-guard position crossbolt safety is smooth and easy with gloved fingers. MSRP is $1,249.

Cranes cooperated and covered us up starting around 7:30 a.m. With seven of us shooting, we reached three-bird limits in an hour. Fabulous sight having these prehistoric birds coming right into our decoy spread 25 yards away. Not many misses from the experts in attendance, but boy are these big cranes hard to bring down! Take some photos and head for the lodge for lunch then out to the pasture for quail and pheasant over dogs with the new 16-gauge Instinct SL O/U.

The latest gauge added to the Instinct lineup is a 16 gauge. (Already released in 2018, were the 12 gauge and 20 gauge). It features an aluminum receiver scaled specifically for the 16 gauge. These are all true framed guns. As always, the Italian artistry was in fine fit and finish combined with rounded body, full relief contouring and great detail of the shoulder bosses. I love the look and rock-solid tradition style of old, and this beauty only weighs 5.5 pounds! (The 28 gauge will be available in 2020.) The gun came with high polished blued barrels and three extended chokes. I used the IC/MOD combo, and it was perfect for flushing birds. Stock and forend are rated at AA, really beautiful walnut of exceptional figure. Style was the round knob “Prince of Wales” grip with fine checkering. A trim and elegant handling forend made the Instinct set low in the hands and point effortlessly. A single mechanical trigger with a selective safety was positive and easy to fire with a fine pull weight. MSRP is $1,729.

Franchi has done a masterful job of creating an O/U that shares a common system but has gone far to create scale in every gauge. Each SL is matched for the gauges and, while I suspect the intention was for a superior game gun, I would suggest this Instinct series will become a favorite for sporting clays shooters as well. Small-gauge FITASC as well as 5-Stand/Sporting has become a very popular side event at NSCA tournaments around the country. I suspect even more growth in the years to come. Pleasant to shoot with more ammo offerings, subgauge popularity has shooters enjoying the game with a favorite game gun.

Walking the red dirt country in a fallow field, our group also included four labs, a shorthair and a wirehair who were well-trained pointers and fetchers. A mix of wild and released birds were found in the calf-high weeds as we walked a large field. Quail generally held tight until the labs rushed in, creating long shots. The pheasants were having none of it flushing at random. My partners are all expert shots and very few escaped despite the long range. The Instinct is a joy to carry, which is what we did over miles of cover and quick to point without a thought.

I will say the pheasant was announced loudly as everyone wanted a cock in the bag. Federal 6s with the purple hull was applauded as “purple rain”. Great sport! Franchi has really made an upland bird gun for anyone who loves small gauges, and they are so confident in the offerings that a seven-year warranty is included by Benelli. I will have one for South Texas Doves, be assured. Really one of the most-pleasant shooting shotguns I have tried over the years.

As most shooters know, the subgauge tubes that reduce gauge by an insert can upset the balance and swing when a 12-gauge host gun is used. Skeet has dominated this idea, but when shooting a sporting event which simulates a live bird, they can be sluggish. Speaking with years of industry experience, and a passion for the Sporting Clays market, I believe Franchi has made a wise move into dominating the small-gauge market with this offering. Weight and gauge size is a smart move that many makers have declined to address. Having seen a new upgraded engraved model with even more figure on the stock, there will be many features brought out to suit anyone’s taste. The coming year 2020 will be a banner year for Franchi’s SL series 28 gauge. We can only hope a .410 will be forthcoming in the future to complete the spectrum! For a full look at all Franchi products, visit their page at benelliusa.com. A dealer listing is also available for purchases in your area.

A sidenote to Filson, who provided our game vests, and to Irish Setter who provided boots. I was slightly concerned that given zero time to break them in would be painful, but they are very comfortable after one outing. Lastly, because the crane (ribeye in the sky) are legendary table fare, Yeti provided our backpack coolers for the flight home. Leakproof and indestructible, they will serve a lifetime hauling meat. SS

A native Texan, Chuck Webb opened a gunsmithing shop in 1980, blending his lifelong passion for understanding how things work and talent for woodcarving and painting. Jess Briley was a regular customer, and eventually Chuck joined the Briley staff, where he learned to operate the machinery, thread barrels and rebuild barrels the English way. He also “developed a sense of what is right.” Chuck moved into sales and promotions, then became General Manager at Briley. After 19 years, he decided to seek a less pressing lifestyle of hunting, fishing, shooting and consulting. Currently Chuck is a consultant in the U.S. for John Mialls of Australia.