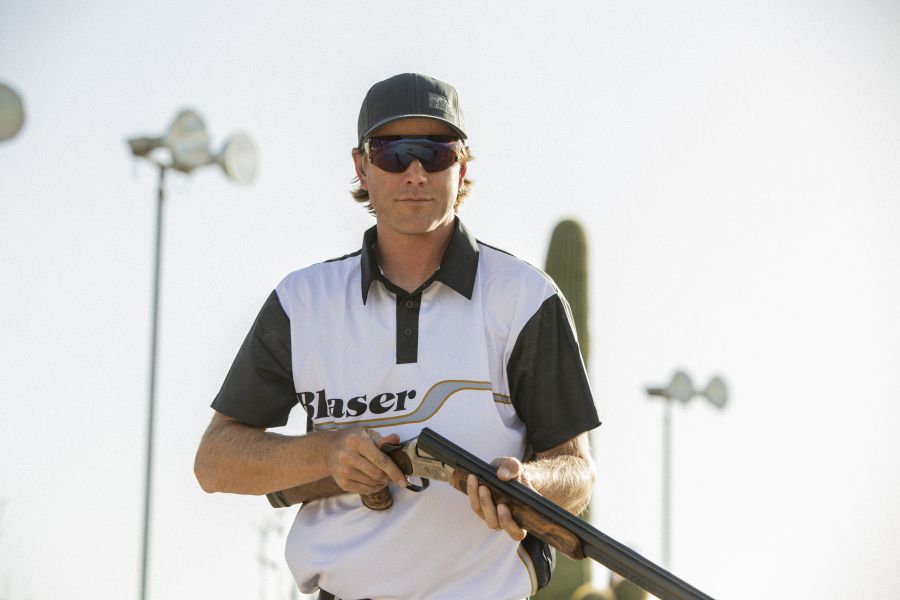 Cory Kruse is a champion shotgunner, strong in his Christian faith, a husband, father and bowhunter. (Photo courtesy of Blaser) 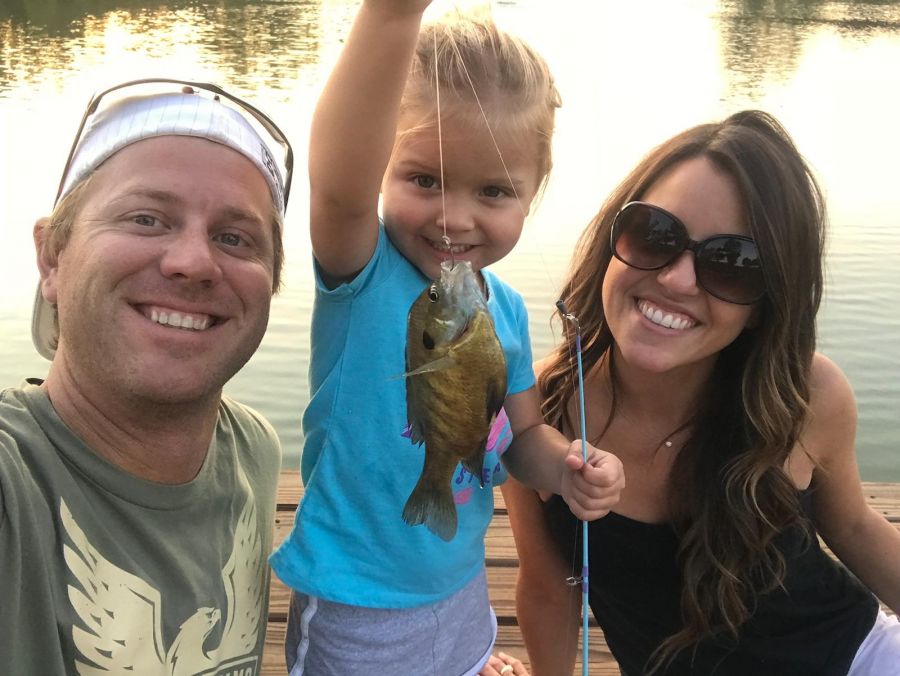 A whopper! Claire Kruse, posing with her parents Cory and Catherine Arrighi Kruse, shows off the monster of a fish she took out of the pond. 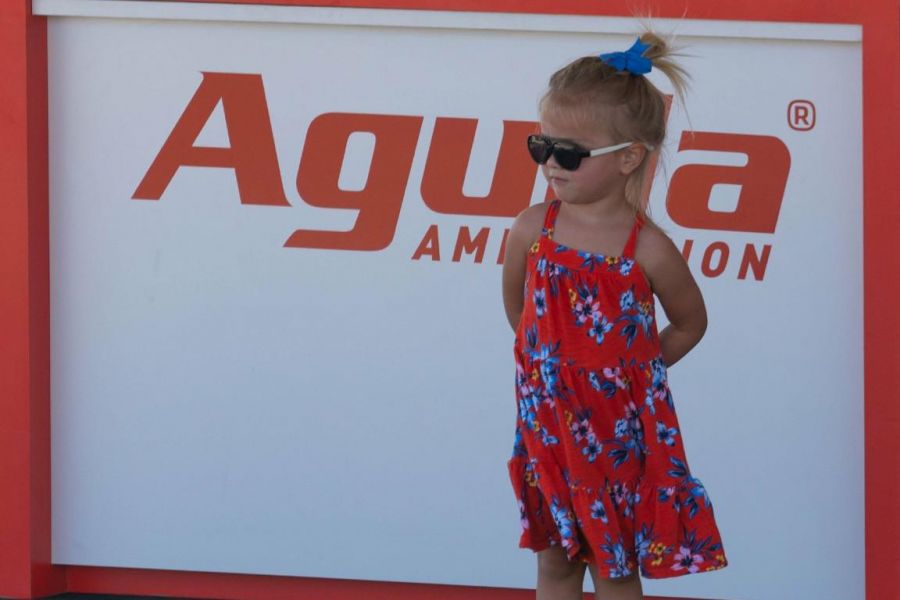 Claire Kruse in action making sure the poster for one of her dad's sponsors is seen by passersby. 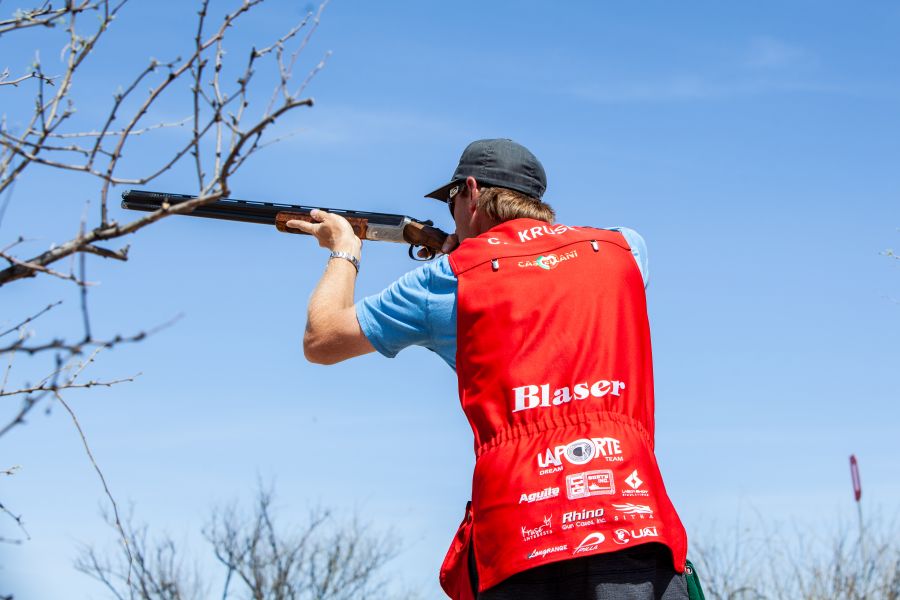 Cory in competition. Cory says he doesn't do a lot of physical working out to stay in shape for clay-target competition. He is so active outdoors he is always in good shape. (Photo courtesy of Blaser)

Cory Kruse is a two-time NSCA Nationals Main Event Champion winning his first title in 2003 and then again in 2012. In 2018 Cory won the NSCA U.S. Open Championship. There are too many other championship titles in Cory’s voluminous resumé to list here, but check out the sidebar to this story.

Cory, a passionate follower of Christ, began his shooting and hunting career when he was very young. Cory’s dad, David Reaves, owned a clay-target range in the Conroe, Texas, area just northeast of Houston. Cory learned much from his dad and became genuinely skillful.

However, there was still more talent to be cultured in young Cory. To shape that talent, David called upon his good friend, multi-Hall of Fame inductee, Dan Carlisle. Under Carlisle’s tutelage, Cory developed into a successful clay-target competitor as well as a hunter.

Johnny: Before I get into the interview questions, I just want to commend you on your great shooting lately, young man. Congratulations on the U.S. Open Championship win!

Cory: Thank you. Yes, I’ve done pretty well this past year. I am very thankful.

Johnny: How is your family — your wife Catherine and your daughter Claire?

Cory: We are all well. My wife and daughter are both healthy. My little girl is 3 years old now and smart as a whip, and the sun is shining. I could not be happier. I am very blessed.

Johnny: When did you start shooting? How old were you?

Cory: It was somewhere around ’97. These were regular targets on an official sporting clays course. I had shot some backyard skeet targets, stuff like that. I began shooting guns: Red Ryders, .22 rifles, pellet guns growing up as just a little country kid out with my granddad. I was shooting my older brother’s hand-me-downs like his pump-pellet gun. I was so little I had to stick the gun in the crook of a tree to be able to get enough leverage to get one pump into it. About ’97 was the first time I had a chance to shoot sporting clays targets on a real course. My dad coached me up to his ability, and then he sent me to be coached by Dan Carlisle.

Johnny: What was your first clay-target gun? Your first dedicated target gun?

Johnny: Do you hunt?

Cory: Yes, I love it. I feel that is real hunting the way it was intended. You have to use your skills, knowledge of the animal, its habits and its preferences in trails it takes and so on to get close enough to it undetected and make a single humane, killing shot. I personally make it my rule not to take any shots beyond 30 yards. I like to get up close and personal when I hunt. These days almost any rifle and scope combination you put together will let you kill at 500 to 600 yards. That, to me, is not hunting.

Johnny: How often do you bowhunt?

Cory: I hunt pretty much anything there is a season or a tag for. I am taking a mule deer hunt later this year. I try to make one crazy hunt a year for maybe elk or bear. I made a couple of trips to Africa with my wife. Yes, I am a totally, heavily addicted bowhunter.

Johnny: Speaking of bows and arrows, that brings me to my next question. Did I hear this right, that at one time you took a shot at a clay target with a bow and arrow and broke it?

Cory: Yes, sir. That was part of my interview/audition video for the popular TV show, Top Shot on the History Channel. I was originally trying to become a contestant on the show. However, they wanted me as a training coach on the shotgun segments of the show. I figured I’d turn in a video of me breaking a clay target with a bow and arrow. It was unique and different. The shot did not get me on the program, but it would have made for some good highlight reel stuff.

Johnny: Do you still have that video?

Cory: It’s around somewhere on an old camcorder I can’t find. The video was on the internet for a while but not any longer.

Johnny: Regarding clay-target shooting, tell me about your equipment and other gear. Our readers are always curious what you big boys use. I know you are a Team Blaser shooter, but for the record what gun do you shoot?

Johnny: I have been hearing quite a lot of good things about Aguila ammunition. How long have you been shooting Aguila ammo?

Cory: This is my first season (2018) with Team Aguila. I can tell you honestly the Aguila ammo is the only ammo I have shot in a long time that gives me the kind of smoke balls on targets like I used to get shooting the old Game Bore White Gold ammo years ago. I know it all has to do with lead density, bore size, choke constriction, crimp pressure and many other things. But this Aguila ammo smokeballs targets, and it’s a 1 oz. load at 1,275 f.p.s. This ammunition from Aguila is target-destroying stuff. I absolutely love it! I can’t say enough about it.

Johnny: What shooting title has meant the most to you and why?

Cory: Hard to answer that one. They’re all special to me, but I really don’t hang my hat on one title. Maybe this year's U.S. Open because after 20 years in this game, I could still run with the big dogs when I set my heart on it.

Johnny: How many clinics do you teach throughout the year? What do you enjoy most about teaching your clinics?

Cory: I’d say around four or five clinics. What I like most is seeing the light bulb come on in people's minds when they get it, younger or older. Anytime I can help someone become better at something they enjoy, or accomplish a goal they’ve set, it really makes me happy.

Johnny: Who has influenced you throughout your career and life?

Cory: Anthony Matarese, Jr. because he’s the mad scientist. His work ethic is contagious, and he studies the game like no one else. He’s the most consistent shot of all time. If you can hang with Ant at a major, you’ll be at the top.

Ed Arrighi has always been there for me. He practices with me and travels with me. He knows me well enough to spot any error in my game. He’s like my Yoda since I was 16.

Brad Kidd, Jr. has always been a close friend, and he works really hard at the game. He doesn’t give up. That dude is tough as nails!

Gregg Wolf because he’s literally the most talented human being on the planet. Hand him a gun, a bow, a golf club or anything, and he’s good at it. He’s influenced me over the years with his never-ending determination.

Craig Hill has also always been there for me. He took me under his wing as a little dude, and we traveled everywhere together. He influenced me to practice hard, work hard, have fun doing what you do and many other things. He basically built the foundation in me for wanting to be great at everything I still do today.

Dan Carlisle taught me to shoot, compete and practice. He built the mechanics I still use today.

Johnny: How about your fitness routine? How do you stay in shape for shooting?

Cory: Ha! I wish I was in shape. I try to make it to the gym but my exercise is just being active. I'm constantly outside doing something, so I think that keeps me going. My wife is great at helping me eat healthier, staying hydrated and getting rest. She always puts Pedialyte in my shooting bag and makes sure I'm staying hydrated when I'm shooting.

Johnny: What is your practice routine for clay-target shooting? Does it vary when you have a big competition coming up?

Cory: My routine this year has involved a lot of Trap and International Skeet. I believe these two games really hone your mechanics. Early this year I spent some time with Dan Carlisle, and he brought me back to my roots of Trap. I believe this game gets your eyes and timing working together the quickest. International Skeet helps me with my mount, stance and matching target speed mechanics. When I get comfortable with these, Sporting Clays seems much easier to me. I'd say a normal practice day nowadays would be 50 International Skeet, 75 (25 yard) Trap and anywhere between 150 to 250 Sporting targets.

Johnny: What are your interests and/or hobbies outside of shooting? What do you enjoy most as an outdoor enthusiast?

Cory: Outside of shooting, my hobbies and interests are my family first. I'm a Christian, a husband, a dad and a bowhunter. As an outdoor enthusiast, I can’t spend enough time in the woods with my bow. I love bowhunting anything.

Johnny: On your website, you say C&G Boats is a dream job. Can you give us a short description of your job and why it's a dream job for you?

Cory: I'm in outside sales. Doing sales for C&G Boats (Joey Arceneaux) is a dream job because I'm able to do what I love to do with our long-term customers who have become some of my greatest friends. We work hard and build great relationships with our customers.

Johnny: How do your shooting sponsors contribute to your success? How do you practice with the Laser Shot Firearm Training Simulator?

Cory: The ability to point accurately is key. With my Laser Shot, I am constantly shooting. It's an absolute blast, especially the hunting games. They have a dove hunting game that is like being in Argentina with a gun that never needs reloading and has no recoil!

Regarding my sponsors, I simply love them all. I'm so blessed to be on their team. I can honestly say that even if I didn’t have any sponsors, I'd still shoot the brands I do today. Their quality, what they stand for, their service and their people are all first class!

Thank you Blaser, Aguila, Laporte, Rhino, Sitka Gear, Laser Shot, ESP, Pilla and Greenwood Custom Stocks and all of my friends and family!

Cory calls himself a part-time sporting clays competitor because he does not invest in the hard-core travel and inherent costs of being at tournaments all around the country. He stays fairly close to home most of the time. Check out his website at www.kruseshooting.com. SS