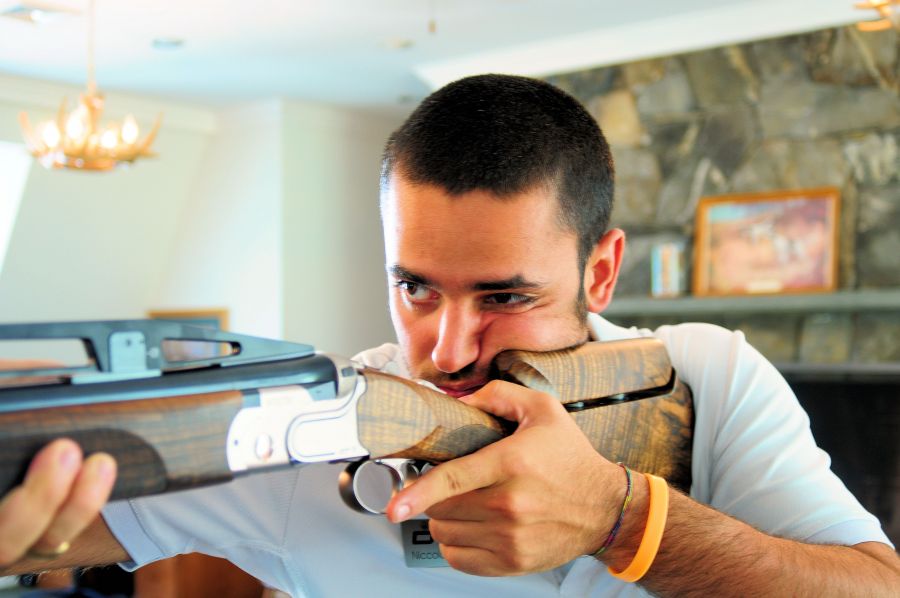 One of the three things a new shooter must know is depicted in this photo: a proper mount and fit of the gun. Learning this will make the difference between hitting your targets and having a good time vs. missing the target and getting beaten up by the gun. 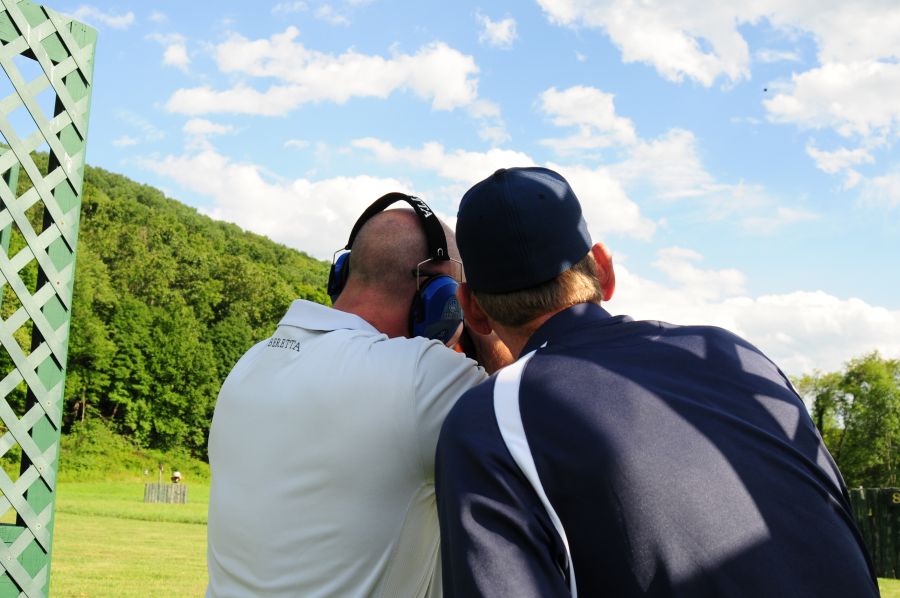 Another important thing a new shooter must know is to look at the target and only the target. Multiple Hall-of-Fame inductee Dan Carlisle coaches a student on this fine point of shotgunnng. 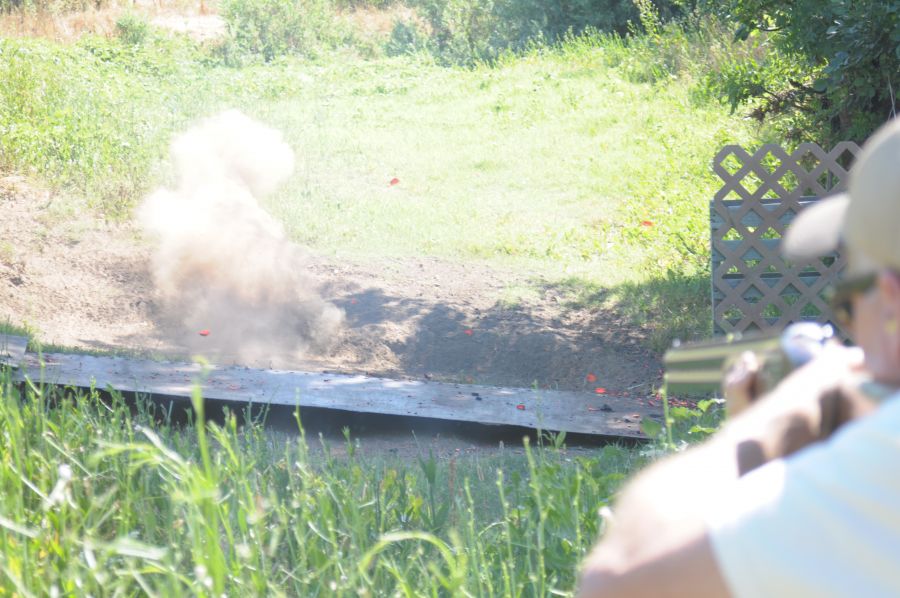 The third thing a new shooter must know is the gun must keep moving after the shot is made. Here we see the results of a proper follow-through on a close-range rabbit target.

At the two ranges I teach at in the Denver area, I spend a lot of time walking up and down the trap line and wandering throughout the sporting clays course talking to people I know and making friends with people I do not know. I will gladly offer a suggestion or two when I see individuals struggling, and I know just a minor tweak or two will help them hit more targets.

My favorite scenario is when I run across a husband and wife (or boyfriend and girlfriend), and it becomes obvious he is introducing her to the sport he loves and wants her to love, too. He hopes once she starts breaking clays, she too will fall in love with trap, skeet and sporting clays, and they will have a hobby they can share together.

How this scenario really plays out is he gives her his gun to shoot, which does not fit her. So she leans far back to support the weight of the gun, then her head is canted over the stock, whereby she is looking at the back of the receiver (not down the rib)…and she shoots AT the target instead of leading it. The result is a missed target, a sore neck, a bruised shoulder and someone who never wants to hold a shotgun again.

The takeaway from all of this is when you, an avid clay-target shooter, take someone along to introduce them to this fantastic sport, do it in such a way they have a good time, hit some targets and do not leave feeling punished physically. And, believe it or not, this is not hard to do.

The way I got into clay-target shooting is probably not too much different than a lot of other people. I started shooting rifles with my father at Golden Valley Gun Club in Pacoima, CA. After we concluded our rifle shooting, we would eat lunch in the restaurant and watch individuals shoot trap and skeet. After doing this for upwards of 12 months, we decided watching something break when it was shot might be more exciting than shooting at a piece of paper. So, my father went to the local sporting goods store and bought two Winchester Model 37s — one in 20 gauge for me and one in 12 gauge for himself.

I have noticed that individuals who come to my new shooter clinics each month or sign up for private instruction either have a background in rifle and pistol shooting (such as described in my walk down memory lane), went out with a friend previously who introduced them to the sport or somehow got intrigued by seeing it done on television and always wanted to try it. The vast majority come from a rifle and pistol background. Since the fundamentals of rifle and pistol shooting are not applicable to shooting a clay target, those individuals who are new to clay-target shooting and approach their newfound love of this game by applying the fundamentals that made them successful in rifle and pistol shooting end up with a possible bruise and being disappointed with their performance. As such, teaching clay-target shooting to the other two groups is easier, as there are no bad habits to unlearn.

What I have found is if you can impart three straightforward pieces of information regarding clay-target shooting basics, it will make all the difference in the world.

• Keep the gun moving after the shot goes off

Someone who is being introduced to the clay-target games does not need to have a shotgun which is custom fit for them. An off-the-shelf/standard dimension shotgun can be sufficient as long as the individual mounts the shotgun properly. A PROPER GUN MOUNT IS WHEN THE GUN IS BROUGHT TO THE FACE, NOT WHEN THE FACE IS BROUGHT TO THE GUN. In some ways, this is exactly opposite to what is done when someone shoots a rifle, especially when that rifle is on a bench or on the ground supported by a mount such as a tripod. When a shotgun shooter brings his face to the gun, it usually results in the shooter putting his head too far back on the comb. And, since many shotguns have the dimensions of a field stock, when the shooter puts his head far back on the stock his eyes cannot see above the back of the receiver.

An experienced shooter who introduces someone who has little to no clay-target shooting experience owes that individual some communication on how to properly mount that shotgun on their shoulder. That means the shooter is not putting the buttstock on his collarbone nor on his shoulder muscle and where his head should be positioned on the comb. This will make the difference between hitting targets and having fun vs. missing targets and waking up the next day with a black-and-blue mark on his cheek and shoulder.

New shotgun shooters who come to the clay-target range can sometimes bring a lot of baggage with them. Experienced rifle and pistol shooters bring that baggage with them. Those who are brand new to any type of shooting bring baggage about shooting with them they have seen on television or in the movies. However, shooting in television and in the movies is much more centered on pistol shooting, a little on rifle shooting but hardly ever on shotgun shooting of clay targets. Therefore, all these individuals come out to the shotgun range, and they want to “aim” at something — since this is either what they were taught (with their rifle and pistol) or heard. And, since most individuals make the mistake of treating the front bead like a front sight, they use that front bead to “aim” at the clay target. Everyone reading this article knows exactly what happens when a shooter treats the front bead on a shotgun like the front sight on a rifle or pistol, so I won’t go into that. Therefore, the experienced shooter who introduces someone who has little to no clay-target shooting experience owes it to that other shooter an explanation of vision as it relates to pointing a shotgun at, and hitting, a moving target.

One of my favorite expressions is “it ain’t over till the fat lady sings.” Without going into a full explanation of the ‘Movement’ fundamental of clay-target shooting, suffice it to say, in clay target shooting the fat lady sings after a good follow-through is completed — NOT WHEN THE TRIGGER IS PULLED. The single most-common reason I see for missing targets from less-experienced clay-target shooters is stopping the shotgun once the trigger is pulled, resulting in the absence of a follow-through and a shot-string which flies hopelessly behind the unbroken target. And, like the other two key basics (which should be explained to new shotgun shooters), those who bring rifle and pistol shooter experience with them have a different perception of follow-through for two reasons: (a) most of the time rifle and pistol shooters shoot at a stationary target, and (b) rifle and pistol shooters are shooting a single projectile (instead of a string of projectiles), so the follow-through time-frame is exponentially shorter in duration.

When it comes to accomplishing a good gun movement through the follow-though, the one thing which can, and will, prevent this from happening is when the less-experienced shooter takes his focus away from the target and brings it back to the bead. This will cause the shotgun to stop moving with the target. What I have discovered in talking with new shooters who have done this is they wanted to make sure they had the ‘right-amount’ of lead for the target. Following that comment, I ask them how they know what the ‘right-amount’ of lead is. Most of the time, they tell me the person who was ‘helping’ them told them that for a certain target it needs so many feet of lead (e.g., both High and Low House on skeet traditionally require four feet of lead when shooting from Station 4). Therefore, the experienced shooters in trying to be helpful to the novice by providing lead amounts in feet is actually doing somewhat of a disservice to that individual without even knowing it. It has been my experience to tell new shooters to give a target a little amount of lead, a medium amount of lead or a lot of lead while still looking at the target and then have the gun barrel continue moving after the trigger is pulled.

So, the next time you take someone new to the shotgun range to introduce them to clay-target shooting (or introduce yourself to someone at the range you can tell is new to the sport), I recommend you do not overwhelm them with every detail you have learned throughout your shooting career. Instead, equip them with these three basic concepts: mount the gun properly in the shoulder and bring the gun to the face, keep the eyes focused on the target the entire time and keep the gun moving even after the trigger is pulled. With just these three basic concepts, there is a high likelihood the individual will hit some targets, not get punished with recoil and have a lot of fun. SS

Mark H. Taylor has over 40 years of shooting experience. He has won many regional, state, national and international clay target competitions. He is the author of the book Clay Target Shooting – The Mental Game and co-author of the book Break ’em All (see page 50). Mark is a NRA Certified Advanced International Shotgun Coach and a High-Performance Shotgun Coach for USA Shooting. He is a Caesar Guerini Pro Staff shooter and teaches monthly beginner shotgun clinics at Colorado Clays in Brighton, CO, and travels nationally and internationally teaching coaching courses and working with world-class athletes.