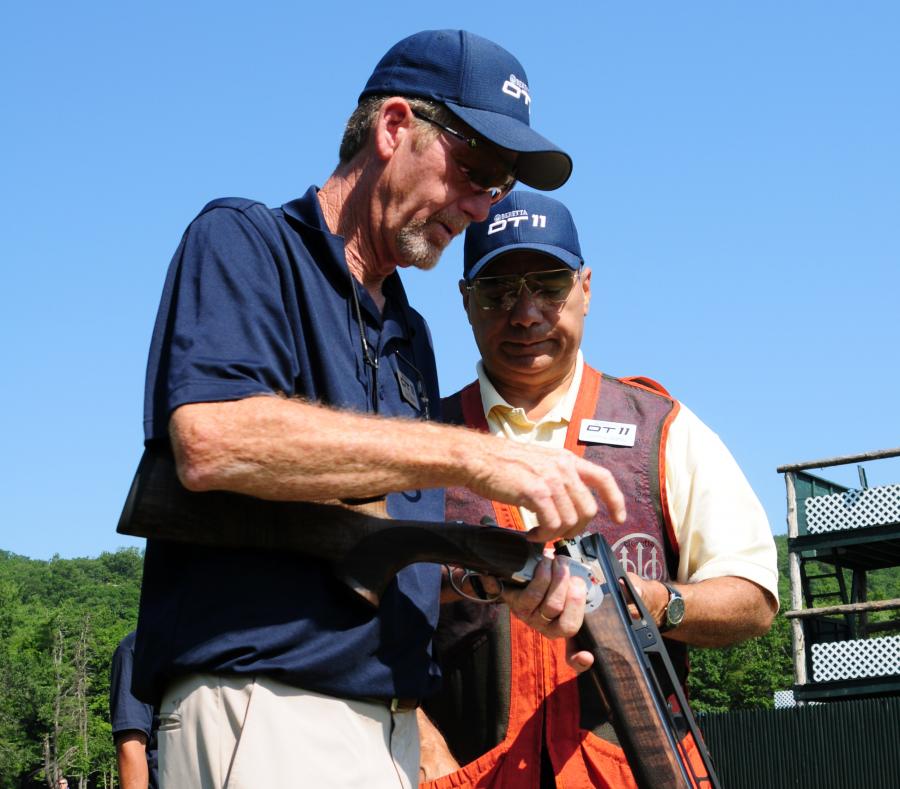 When practicing for a competition, a shooter should also try to duplicate the anxiety which he/she will likely encounter during the competition. The best way to do this is to put some type of wager on the performance during the practice rounds. If practicing with friends, wagering for paying for lunch or beverages is a good approach. 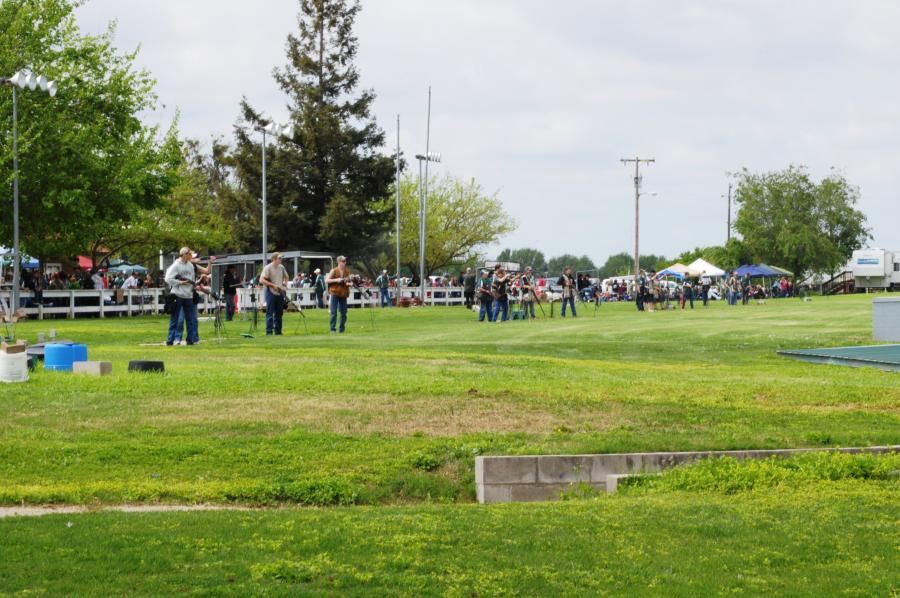 In the case of the trapshooter who shoots 50/50/50 each day of each weekend, this is NOT training and it is NOT good practice. Since most trap competition events are in allotments of 100 (and not 50), by shooting 50 this shooter is not duplicating the same conditions he or she will encounter in a competition. 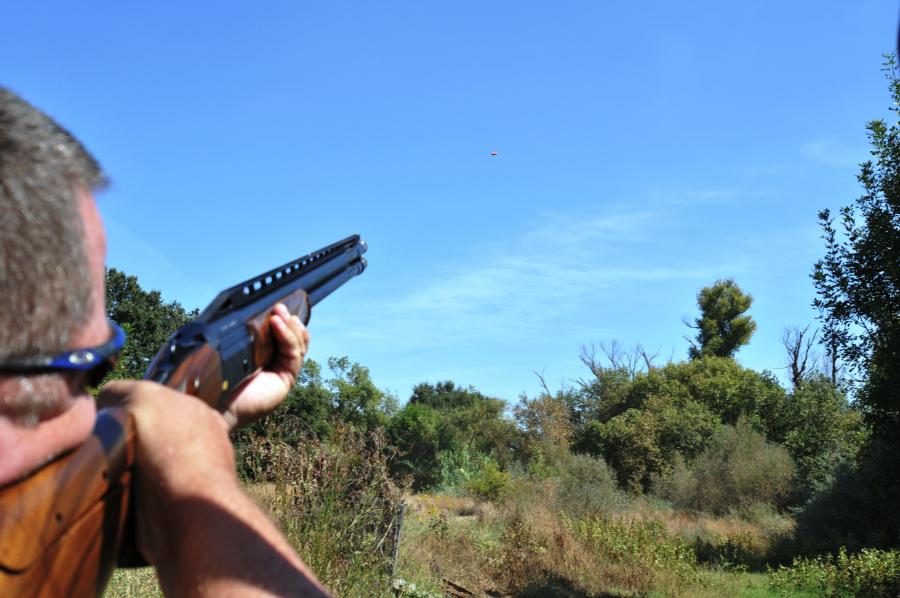 What do most shotgun shooters who want to get better scores do? They head out to the range, and they shoot standard rounds of trap, skeet or sporting clays. I applaud their dedication to increasing their skill level, and many are successful at using this method. However, the rate at which their success increases will be about 1/3 of the rate it could be if they were using the proper mixture of training and practice.

I am sure if you ask ten people what the difference is between “training” and “practice” in sport, over half will probably tell you they are the same, and the remainder will all provide different definitions. However, training and practice are different. To become extremely proficient in any sport, an athlete needs to do both.

It is also true there is some overlap whereby practice is occurring during your training sessions and vice-versa. However, most shotgun shooters wanting to increase their skill level spend the majority of their time practicing and not training. This is why many fall short of their goals and do not achieve the level of proficiency they could or they want.

The way I use the word “practice” when talking about the shooting disciplines is that an individual preparing for a competition will try to duplicate the conditions he believes he will encounter in that competition and then practice under those conditions over and over again — continually increasing his proficiency.

Let me use another example to drive this point home. When a student is preparing for a test (e.g., the LSAT), he/she would go to the library and look for many practice exams. They will then take those exams over and over with the intent of improving their proficiency. In order for the practice exams to be effective, if the guide tells the student they have one hour to complete a section when taking these practice exams, they will do that practice exam section in one hour. This further replicates the conditions they will encounter during the actual exam.

What do most shotgun shooters who want to get better scores do? They head out to the clay target range on the weekends and shoot standard rounds of trap, skeet or sporting clays. I have even heard many trapshooters tell me they shoot 50 singles, 50 handicap and 50 doubles each day on each weekend. I applaud their dedication to increasing their skill level, and many are effective at increasing their skill level using this approach. However, the velocity at which their skill increases is about 1/3 of the rate it could be if they were using the proper mixture of training and practice.

When track athletes prepare to compete in a certain event, they do not only run that event. What I mean by that is, if a track athlete competes in the mile event, their training probably consists of (a) easy runs, (b) interval runs, (c) tempo runs, (d) speed runs and (e) fast-finish runs. Then they practice running an actual mile to record their time. Steps (a) through (e) are their training, and the final run for time is their practice.

A competitive shotgun shooter who continually shoots standard round after standard round would be analogous to the mile runner who just runs as fast as they can for a mile then does it over and over again. Will this type of athlete get faster and lower their time? The answer is “yes” but not as quickly and efficiently as the mile athlete who constructs a routine integrating both training and practice.

Going back to the trapshooter who shoots 50/50/50 each day each weekend. This is not training, and it is not “good” practice. Since most trap competition events are in allotments of 100 (and not 50), by shooting 50 this shooter is not duplicating the same conditions he/she will encounter in a competition. It is a weak attempt at practice, and it will not allow the shooter to derive the results he/she wants in a timely manner.

This shooter would be much better off by shooting 100 singles, 100 handicap or 100 doubles and using everything in their power to duplicate the conditions they will encounter at the tournament. For example, if they like to start on Post 4 during a competition, then they should be starting on Post 4 for all four standard rounds. If they like the rhythm of a full squad, then they should wait for four other shooters to join them for each standard round. Starting on a different post during their practice session or shooting alone during their practice session will not allow the shooter to get the benefit to flourish during the competition.

In addition, during a normal trapshooting competition, the complete allotment of targets are shot without an interruption (i.e., during a 100 target event all 100 targets are shot without a stoppage). Therefore, an individual who is practicing for this type of competition should shoot all four practice rounds consecutively and not stop after 50 for lunch or to take a break.

When a shooter practices for a competition, he/she should also try to duplicate the anxiety which they will likely encounter during the competition. The best way to do this is to put some type of wager on the performance during the practice round(s). If the shooter is practicing with friends, wagering paying for lunch or beverages is a good approach.

If the shooter is practicing with individuals on the squad they do not know, one good approach is to offer to pay for their rounds if a certain score is not achieved (e.g., if a shooter has a singles average of 90, he/she could offer to pay for everyone else’s round if he/she does not hit at least a 23 while shooting this practice round). This is an excellent way to add pressure and anxiety similar to what will be felt during a competition. I can guarantee that whether the shooter has to pay for the other people’s rounds or not, these individuals will be happy to shoot with that person again in the future.

Like the student who is practicing to take the LSAT, when a competitive shooter is practicing to be successful at a specific event (e.g., Grand American, U.S. Open, World Shoot, etc.), being able to practice as much as possible at the venue where the event will occur is optimal. This practice will come as close to replicating the conditions during competition as possible. Shooters should try to shoot at the same time of the day they will shoot during the competition (so they can be comfortable with lighting conditions) and warm-up in a similar fashion.

For practice to be effective, it must duplicate the actual competition to the maximum extent possible. Earlier today I was watching a PGA tour event on television, and the announcer commented on the fact Tiger Woods has four golf areas set up at his home which are configured the same as the next four courses where he will be playing. As such, his practice not only imitates the competition, it duplicates it EXACTLY.

Let’s step back from our discussion on practice and discuss training.

While I am not a golfer myself, I work with many golfers on their mental game and their psychological approach to their success. There are many similarities between golf and clay target shooting, so it is easy for me to train a golf athlete without being a player myself.

What I have uncovered in working with golf athletes is the accomplished golfers spend 10+ hours on the driving range and putting green for every hour they spend on the actual golf course. What I have not seen from successful golfers is the tendency to park their cars, grab their clubs and walk right up to the first tee box. Most, if not all, top-level golfers will warm-up for a little bit at the driving and putting range prior to hitting their first shot of the tournament. Then, after completing the round of golf, some golfers may return to the driving range and putting green if there was something they struggled with during the round and feel needs extra work.

What I have noticed with the majority of competitive shotgun shooters is they park their car, go into the clubhouse to fill out paperwork, get their guns out of their cases and assembled, grab their shells, glasses and ear protection and proceed to their first station. In no other sport than competitive shotgun shooting do athletes take this approach. Yes, there are a very small number of shooters who will warm-up by shooting 25 targets on a standard round if facilities are available and an even smaller number who will warm-up by doing some stretching exercises to get their muscles ready for the competition. But the largest majority of competitive shotgun shooters roll out of bed and start competing.

The hours upon hours a golfer spends on the driving range and putting green is their training. This warm-up and this after-the-competition routine is also part of their training. What do competitive shotgun shooters do to train? Anyone who knows anything about golf understands the value of the golf driving range and the impact those hours have on the golfer’s game. As such, the question I have been asking for years is what is the equivalent of the driving range for a competitive shotgun shooter?

Then when the golfer moves to the putting green, he/she can focus on the fundamentals of putting without having to record the number of hits it took to get in the hole. And, if a golfer is practicing lag putting, he/she may not have any intention of actually getting the ball in the hole. That individual is training by focusing on specific actions and fundamentals.

Similarly, shotgun shooters need to find training exercises which will allow them to focus on improving their fundamentals without being concerned about hitting a target. In Part 2 of this article we will explore the answer to the question: “What does effective training consist of for a competitive shotgun shooter?" SS

Mark Taylor has over 40 years of shooting experience. He has won many regional, state, national and international clay target competitions. He is the author of the book Clay Target Shooting – The Mental Game and co-author of the book Break ’Em All. Mark is a NRA Certified Advanced International Shotgun Coach and a High-Performance Shotgun Coach for USA Shooting. He teaches monthly beginner shotgun clinics at Colorado Clays in Brighton, CO, and travels nationally and internationally teaching coaching courses and working with world-class athletes.