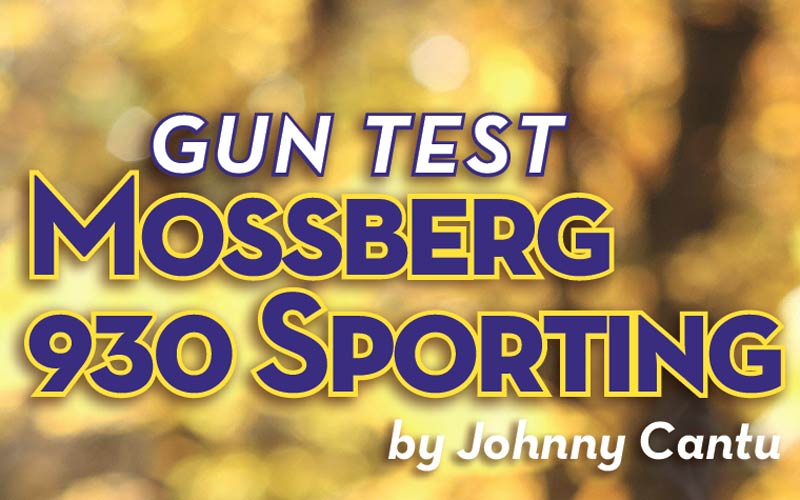 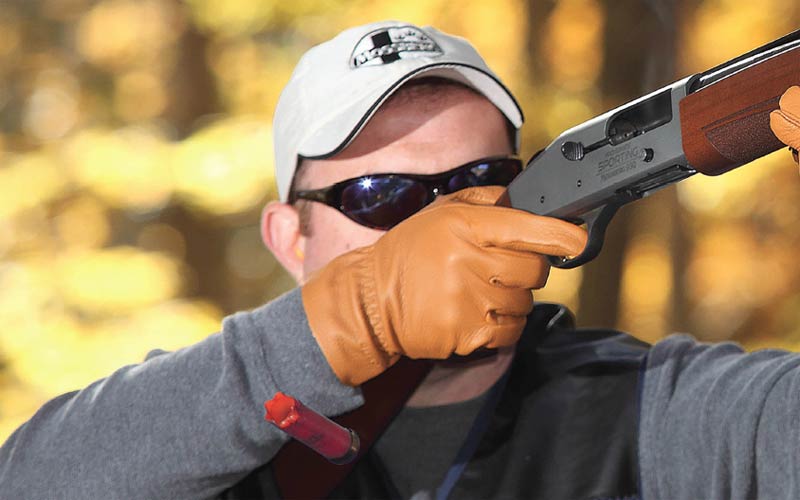 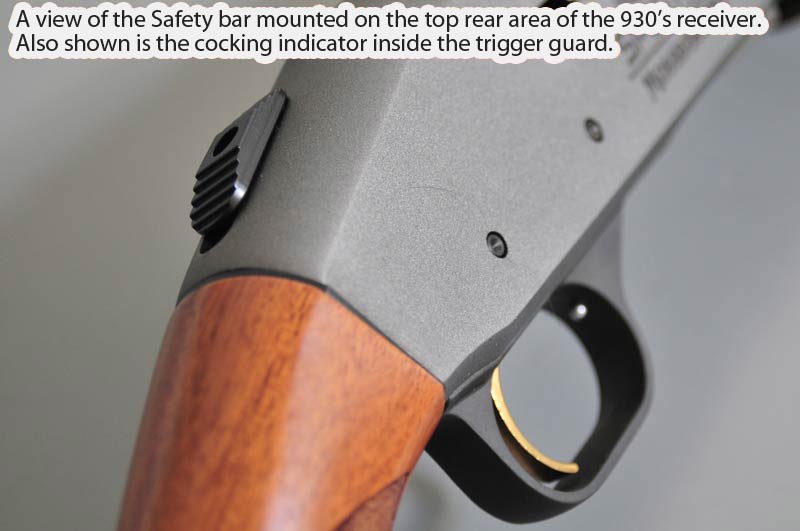 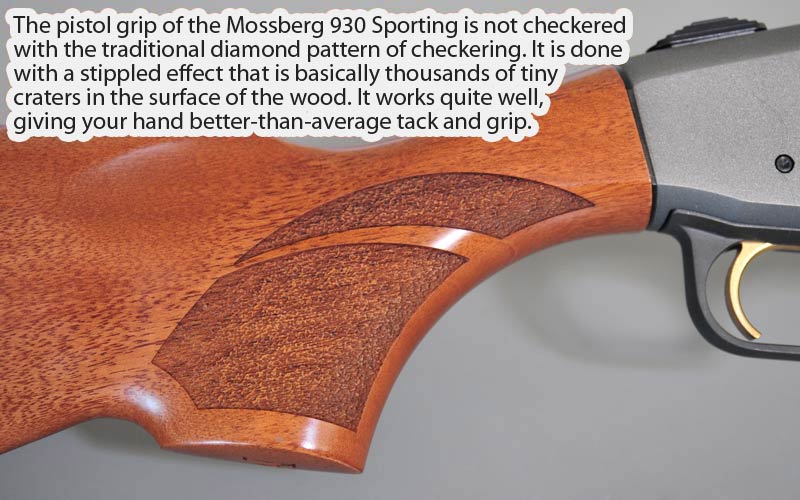 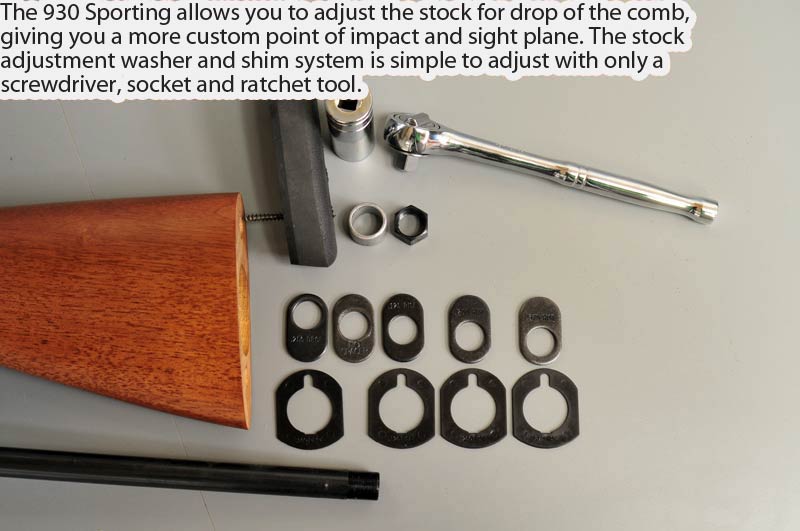 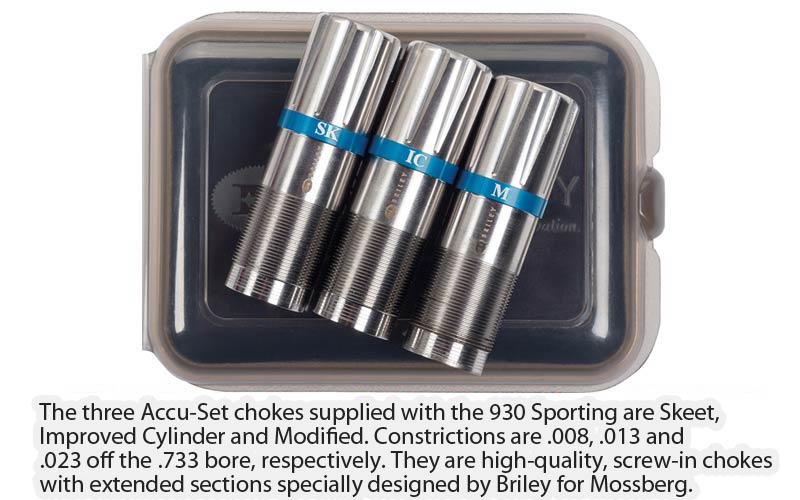 In November of last year I was invited to be a participant in a writer’s camp in Houston, Texas, for the launch of Mossberg’s 930 Sporting semi-automatic 12-gauge shotgun. The event was held at the American Shooting Center. Years ago I was the Manager of the Skeet and Trap area at ASC, and I lived only a stone’s throw away. I enjoyed my limited time with this new semi-automatic from one of America’s most trusted gunmakers and asked if I could obtain one for a more detailed evaluation.

The Mossberg 930 Sporting semi-automatic has not garnered much attention in its short time in the marketplace. The names of Italian semi-auto gunmakers that start with a B and end in A or I or other American brands like Browning, Winchester or Remington are normally the names clay target shooters pick from when shopping for a new self-shucking clay-target crusher. Features like shims that allow for drop adjustment, ported barrels and glow-type sights are some of the things that tend to attract shooters these days. Well, the Mossberg 930 Sporting is more than the name implies, meaning value and reliability at a working man’s price tag. You still have quality, value and reliability, but with the 930 Sporting you get a bit more for your money. Let’s check out this new Mossberg in more detail and let you make up your mind afterward.

When the Mossberg 930 Sporting was delivered to my office, I was a bit surprised at the length of the box it came in. Unlike the majority of shotguns I have tested that come disassembled and in cases or cardboard boxes, the Mossberg 930 Sporting came fully assembled in a cardboard box that housed it, its accessories and printed materials. This made for a rather long carton. Nothing at all wrong with that, just different.

The 930 Sporting is offered with a 28” ported, vent rib barrel. The ventilated top rib measured 9.7mm from breech to muzzle and did not indicate any taper along its length. The 930’s barrel accepts 2¾” and 3” shells and sports an internal diameter of .733. The 930 has some weight that will aid in the already softer recoil from this gas-operated shotgun. The weight of my test sample on our postage meter scale was very nearly 8 pounds, 7.97 pounds to be precise. The 930 Sporting’s receiver is drilled and tapped and will accept typical scope bases and rings.

Part of Mossberg’s Pro Series shotguns, the 930 Sporting incorporates premium finish treatments on certain parts to maximize reliability and performance. The receiver has a tough Cerakote® finish with the words Pro Series, Sporting, Mossberg 930 etched onto the side. The use of boron nitride coatings on the gas piston, the gas ring assembly, magazine tube and hammer and sear helps to prevent corrosion and aids in the ease of cleaning. The shell stop, bolt slide and elevator (carrier) receive additional finishes to reduce friction and increase the speed and smoothness of follow-up shots. To the best of my knowledge, the Mossberg 930 Sporting is one of the few shotguns using such finishes. I would suspect other brands use similar surface treatments, but for the most part the consumer is unaware of them, as they are not normally touted in the marketing paraphernalia.

The popularity of aftermarket glow-type sights many clay target shooters place on their shotguns has made these sights often come as factory equipment. This is the case with the Mossberg 930 Sporting. A total of nine of these sight tubules come with the gun. You have your choice of different sizes and colors. Interestingly, there is no mid-bead on the barrel.

The buttstock and forearm of Mossberg’s new 930 Sporting are made of American walnut. Color is medium brown with good, strong grain. It’s not likely you will ever see one of these stocks or forearms crack under the stresses of normal use. The areas of the wood typically checkered are laser-etched with what I would call a stippled effect, sort of thousands of tiny, shallow craters. This effect works rather well, as I had no trouble holding onto the 930 Sporting under recoil or even with slightly sweaty hands. A 1” medium-soft, black rubber recoil pad is mounted on the rear of the buttstock.

As for the trigger group of the 930 Sporting, I found my test sample’s sear initially broke at just under 6 pounds. However, with just a few boxes of shells, it broke consistently afterward at just over 5 pounds. This might seem like a heavy trigger, but while take-up was a bit longish, it was smooth and offered no hitches that proved detrimental to the feel or consistency of the trigger. One feature I liked was the cocking indicator housed within the trigger guard. The indicator is a small pin that protrudes when the hammer is cocked and sits virtually hidden within the trigger housing when the hammer is uncocked.

One of the features that visually identifies a Mossberg shotgun is the safety bar mounted at the top rear of the receiver. I used to think the placement of the safety bar was unattractive and more of a bother than useful or practical. Well, I have been wrong about a lot of things, and this is one of them. The safety at the back of the receiver worked very well, and though I used to think they would upset my sight picture, it did not. The safety worked as designed and clicked on and off with positive feel but not too stiff.

One of the features mentioned earlier almost universally offered on the popular clay target semi-automatics is a stock adjustment system allowing for multiple drop dimensions that provides more of a custom fit of the comb to the shooter. Mossberg’s 930 Sporting passes muster in this regard as well. The 930 Sporting is packaged with five drop spacers and four nylon shims to provide just such adjustment. Drop spacers that allow for 1/8” rise in the drop dimension, ¼” rise in drop and 3/8” rise in drop are in the accessories packet. The nylon shims that fit between the head of the stock and the back of the receiver accompany the steel washers. There is also a washer/shim set that provides ¼” drop, and the final washer is the factory-installed washer that is a neutral drop. It does not have an accompanying nylon shim. As is always the case when I test a gun equipped with such a system, I set the stock drop for as flat a sight picture as I can get before I test-fire on the range. I prefer a sight plane that provides a 50/50 point of impact or very close to it.

My testing took place both on the skeet field and the sporting clays course at Coon Creek Trap and Skeet Range in Lincoln, California, making use of both 1 oz. and 1 1/8 oz. loads of 7½s from NobelSport, Rio Ammunition and B&P. The Skeet choke was tested first on some Doubles targets from Skeet stations 3, 4 and 5. The 1 oz. loads and the .008 constricted Accu-Set Skeet choke obliterated targets as if it had a grudge against them. I was curious to see what the Improved Cylinder was capable of and itching to use the Modified on targets. Another box with the IC inserted in the muzzle proved just as destructive, if not more so, than the Skeet choke on innocent clay birds. I decided to stay with the IC for the remainder of my testing on the Skeet field.

The 930 Sporting and I moved to the cages of the sporting clays course where I switched to the Modified choke. I knew the Modified was more choke than what was really needed for almost all of the sporting clays presentations at Coon Creek. However, the 930 Sporting had so far performed well and was treating my shoulder kindly, so I decided to see what it (and I) could do with the Modified choke. I was not disappointed. As my boys used to say when they were young, the targets were “murderlized”. I don’t know about you, but when I hit a target that hard, it feels good.

I interspersed the 1 oz. and 1 1/8 oz. loads within the gun. The 930 Sporting digested them all with equal ease. Long, dropping incomers were easily within the range of the 930 and the Modified choke. Rapidly exiting short as well as long quartering targets were emulsified by the 7½s. Even I was impressed…and I was shooting them! The testing went well. Particularly well because my aging shoulders felt just fine afterward. I had never tested nor owned a Mossberg product. This one was making me think I need to remedy that.

Ejection of the spent shells was complete and powerful, throwing them easily 10 feet or more out from the cage. The loading of second shells into the magazine tube was quick and smooth. There were no misfeeds at any time of the second shells coming from the mag tube. By the way, the 930 Sporting comes with a wooden dowel factory fitted within the magazine tube. It reduces the magazine tube capacity from an unplugged 4 + 1 to the standard 2 + 1. The plug can be easily removed if need be.

If I was forced to say something I would improve upon, it would be the bolt-release button. For a clay target specifically designed shotgun, it would be nice to have more bearing surface for your thumb or finger to help decrease the poundage you have to apply to release the bolt.

So, what do I think of the Mossberg 930 Sporting? In a few words: it’s rugged, reliable, adjustable for fit, comfortable to shoot and, like Mossberg always has been, gives you your money’s worth in value and quality. Simply stated, you get a lot of gun at an affordable price. By the way, MSRP is $1,029. See the Mossberg ad on page 35 and be sure to let them know you saw their ad in Shotgun Sports. SS