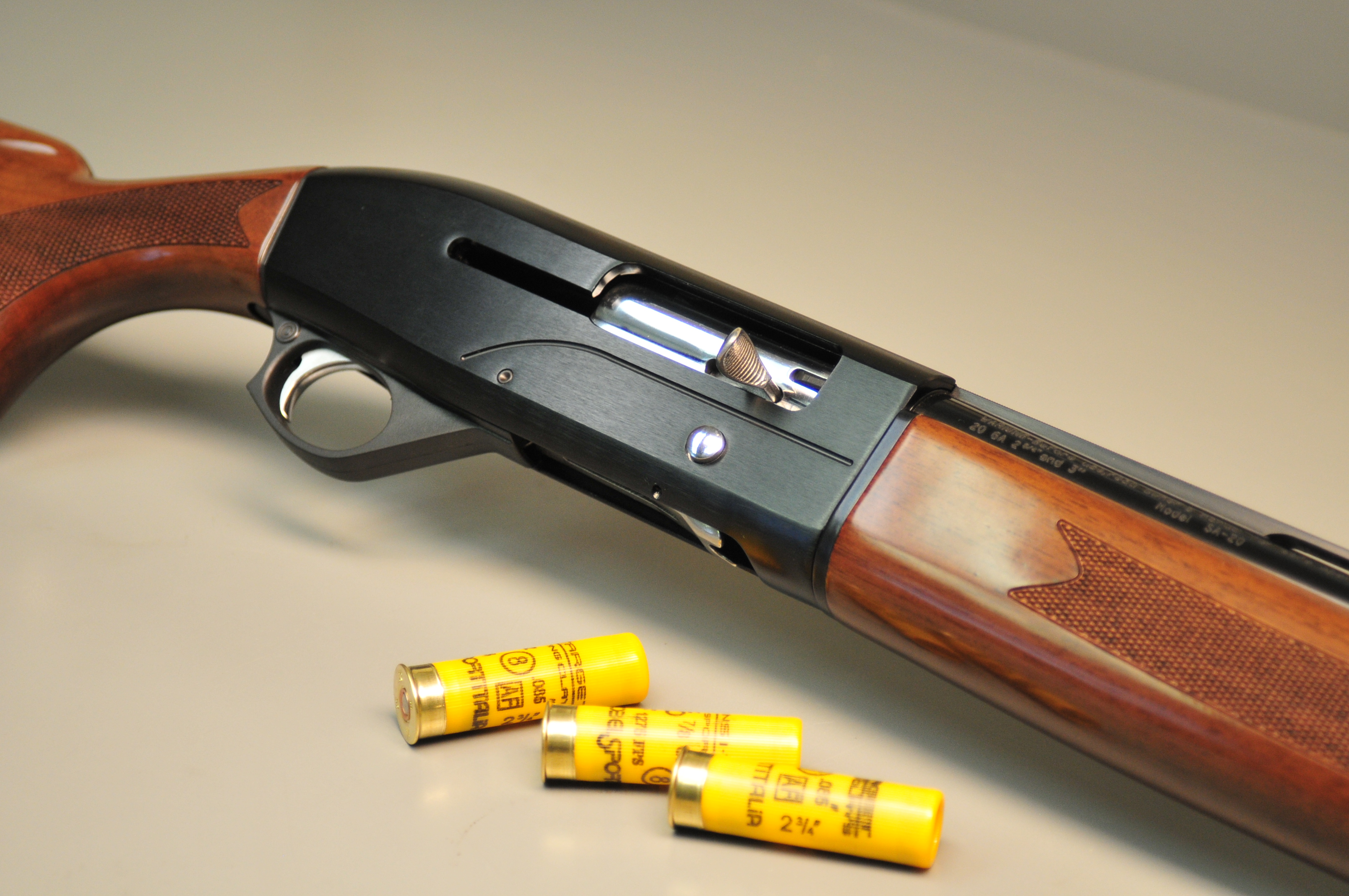 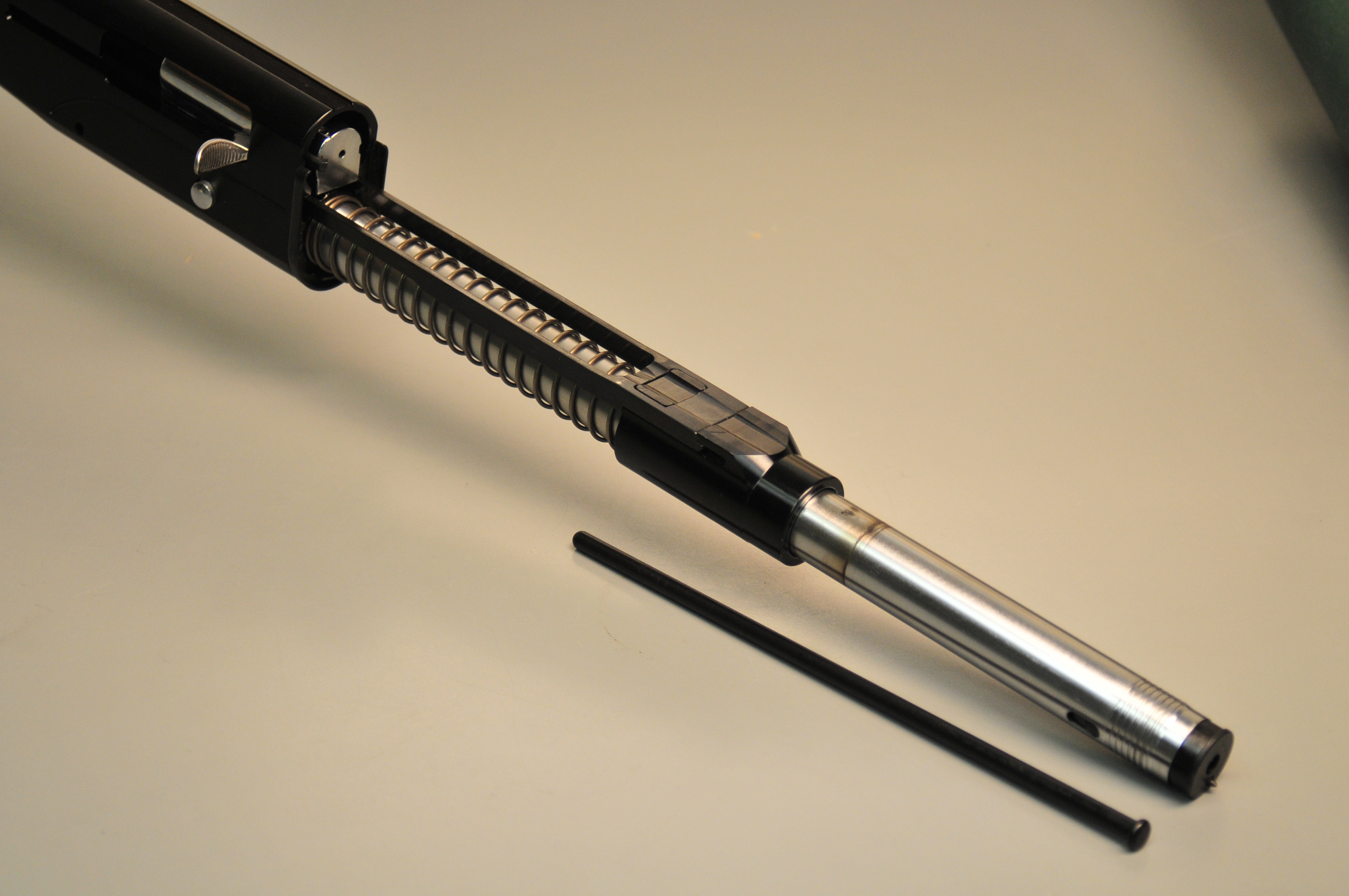 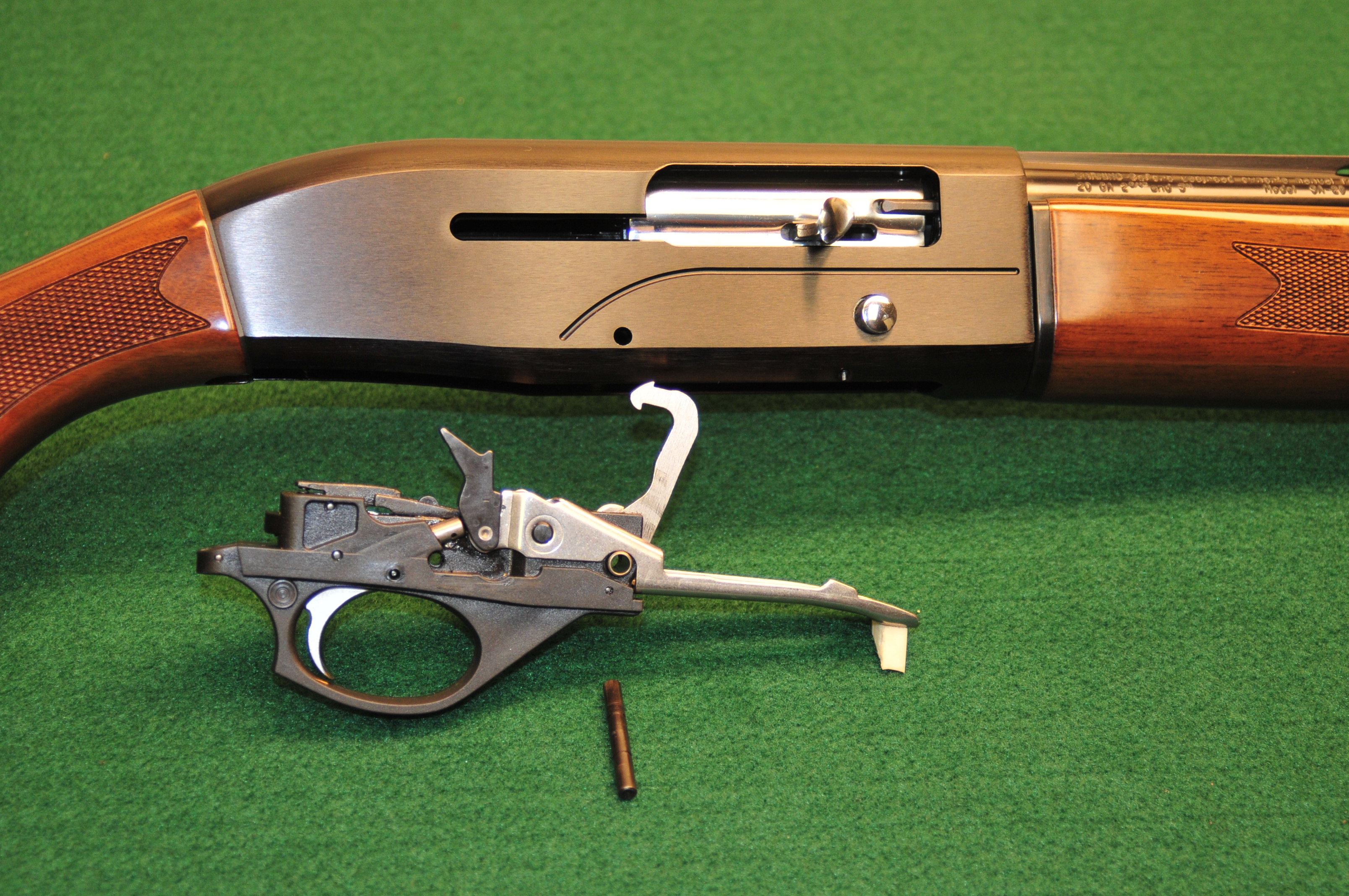 A view of the single trigger plate retaining pin that holds the trigger group in the Mossberg 20-gauge semi-automatic receiver. 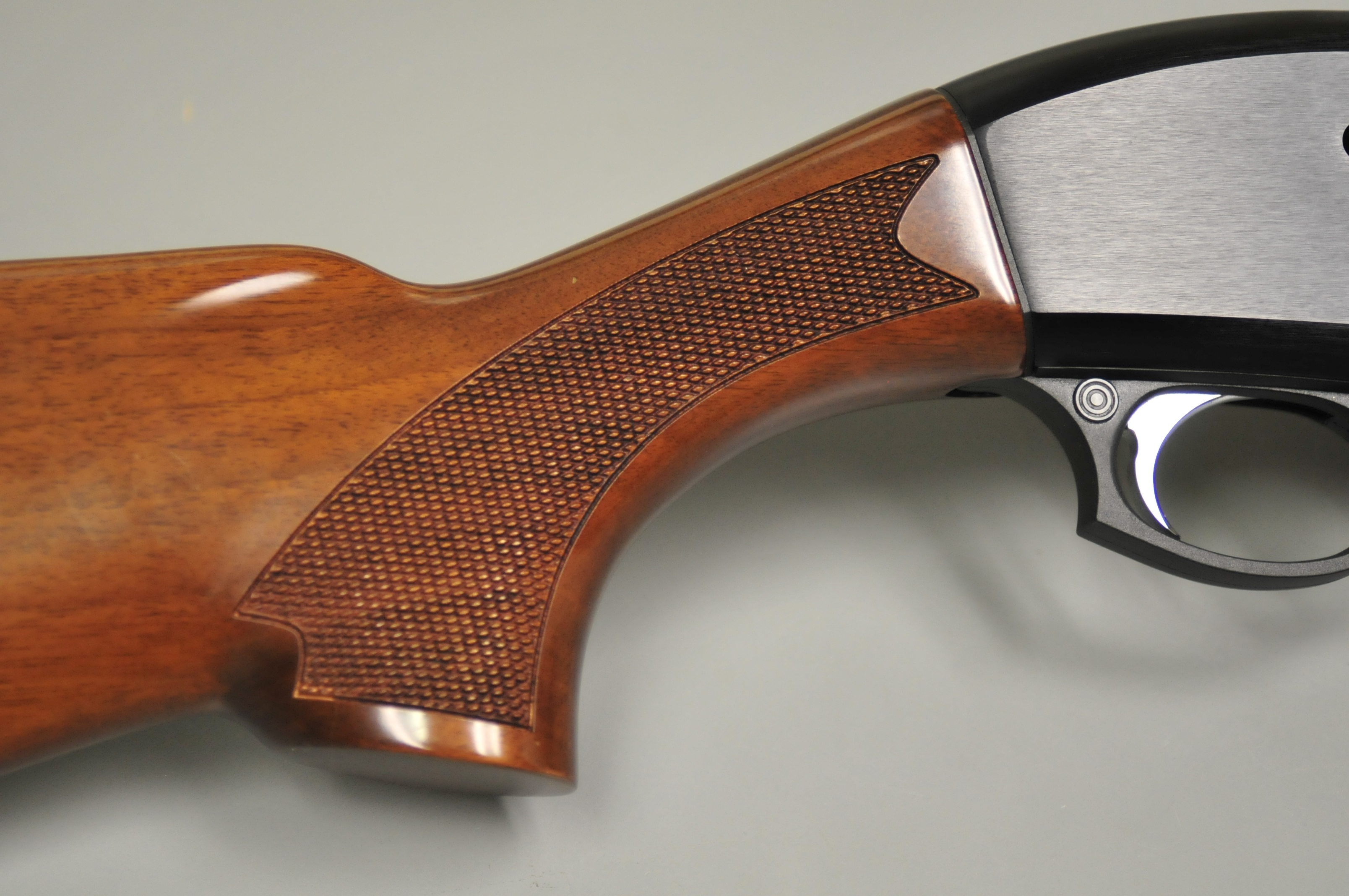 The laser-cut checkering on the SA-20’s pistol grip. 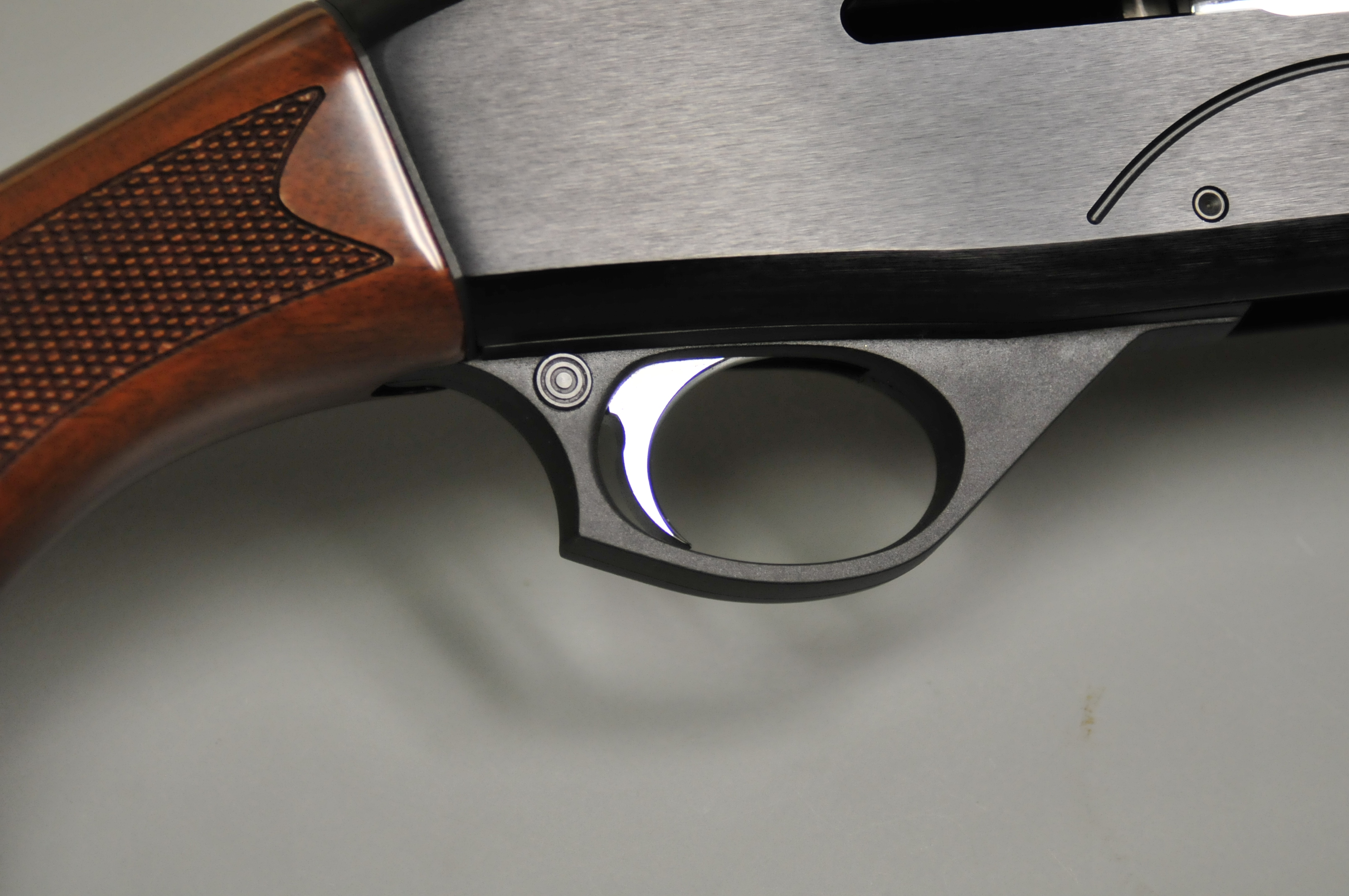 The stylish trigger housing of the SA-20 and the rear-mounted crossbolt type safety.

Probably the one question I have been asked more than any other has to do with what design and gauge of shotgun I would recommend when trying to get someone started in shotgun shooting, in particular, a young person with little or no experience in shotgunning. Better than 80% of the time, my suggestion is a soft-shooting, semi-automatic in 20 gauge. The rest of that response normally includes the names of Beretta, Winchester, Remington or Benelli as the gunmakers who can help you along your way if you follow my suggestion. Well, from now on there will be another name included in that group — the name, Mossberg.

O.F. Mossberg & Sons have been producing quality firearms for the American market since 1919. What began in a tiny rented loft in New Haven, Connecticut, on State Street eventually grew to a company with over 400 employees, a manufacturing facility of nearly 160,000 square feet and grossing roughly 26 million dollars in total annual sales in markets around the globe. Quite the American success story.

To most U.S. firearms enthusiasts, the name Mossberg connotes dependable, durable and economically priced gun designs that do the job they are intended to do, all the while with a curb appeal that could be called a bit Spartan or, as I prefer to think of it, as an economy of adornment. Mossberg guns are made to work and Work and WORK and that’s what they do.

A new model of semi-automatic shotgun is now part of the stable of shotguns available from Mossberg, the SA-20. This sleek-lined, lightweight and soft-recoiling semi-auto is an ideal choice if you are looking for a shotgun to start out your son or daughter, niece or nephew or whomever in clay target shooting or hunting. The Mossberg International SA-20 currently is produced in 6 versions: 26” or 28” with synthetic stock, walnut stocked (such as my test sample) in 26”, synthetic stocked 26” done in Muddy Girl camo pattern, a 22” Turkey model finished in Mossy Oak Obsession, 20” fixed Cylinder bore Railed model, Railed pistol grip version and a Youth Bantam with 24” barrel. Additionally, new for 2017 is a 28-gauge version of the walnut-stocked model.

The SA-20 is based on a high-strength, lightweight aluminum alloy receiver that carries simple yet stylish lines. This is a nice looking gun.

This 3” chambered, gas-operated semi-automatic uses a simple and efficient piston system within the gas chamber attached to the barrel. No fuss, no muss.

What used to be a standard design of having the rebound spring system of a semi-automatic shotgun housed within the buttstock is now housed within the forearm with the rebound spring itself doing its work while coiled around the magazine tube. I once thought such a design would shift the balance of the gun too far forward to allow good swing dynamics. Not so. The SA-20 balances well, handles smoothly and is alert to the target. The light weight of the SA-20 (6.5 lbs.) will make it a joy to carry in the field when hunting. On the performance side of things, the rebound spring system worked flawlessly during test firing at the range.

Ejection of the NobelSport Sporting Clays loads launching 7/8 ounce of 8s was equally without error. All hulls were tossed well clear of the gun off to the right.

Chokes that came with my test sample included Full, Improved Modified, Modified, Improved Cylinder and Skeet, what Mossberg calls a Sport 5 set. Due to foul weather conditions in my area on the days I wanted to run the SA-20 to the range, I did not get a chance to pattern the chokes individually. However, when I shot targets on a local 5-Stand set-up, I checked out each of the chokes and all performed as intended. The Modified choke was the most used, and I was impressed with how it hit targets; solid hits with good “cornflake” breaks on targets even out to 35 yards. Rabbit targets that were within 25 yards and thrown showing a full side profile were eaten up by the Improved Cylinder choke. The choke set comes in the SA-20’s gun case with a flat, notched basic choke wrench all housed in a handy carrying case.

As mentioned, my test sample of the Mossberg International SA-20 was the 26” barreled walnut-stocked version. The grain of both the stock and forearm were plain with medium brown/honey-colored grain. The stock and forearm are satin finished in a tough, clear lacquer. Checkering on the wood is a standard point style and appears to be laser cut, as it is precise with no overruns of the borders. The SA-20 has a ½” black, medium-soft rubber recoil pad of the sporting clays style (with the inset hard nylon tip at the top of the pad) on the face of the buttstock.

Overall length of the Mossberg SA-20 is 46.5” with Length of Pull at 14” with little, if any, discernible cast. At 14”, the LOP was just about right for me even wearing a winter shooting jacket.

I shot several rounds of the 5-Stand at the Auburn Trap Club with the SA-20, and for not having shot any targets in several months, I did okay. However, it could very likely have been a better day for me if I could have had a lighter trigger pull. The trigger pull weight as measured by my digital trigger pull scale consistently weighed nearly 7 lbs. On such a lightweight frame when pulling the trigger, a heavy trigger pull causes the gun to move off the target as you squeeze harder to make the sear disengage. This happened several times to me on the range. I pulled once on the trigger…nothing. Pulled a second time…NOTHING. Finally, I coaxed the trigger to fire the shell but not until after the gun had moved enough on my shoulder to cause a miss downrange.

I understand the caution gunmakers must use when setting up trigger pull poundages. With attorneys ready to jump on anything that even hints of a case against a gun company, a heavier-than-what-you-would-expect trigger pull is almost a certainty. But the good news is such situations can be addressed easily and normally without the outlay of very much hard-earned income.

The Safety on the Mossberg SA-20 is of the rear-mounted (behind the trigger) crossbolt type. It moved positively and did not become stubborn when moving it to the Off or On position.

The Mossberg International SA-20 maintains an MSRP $653.20 but just shop around with the dealers in this issue who offer Mossberg firearms and make your best deal. This is a semi-automatic I will definitely make recommendations for the next time someone asks me,”What gun and gauge do you suggest I get for my son or daughter who are just starting out shooting clay targets?” SS