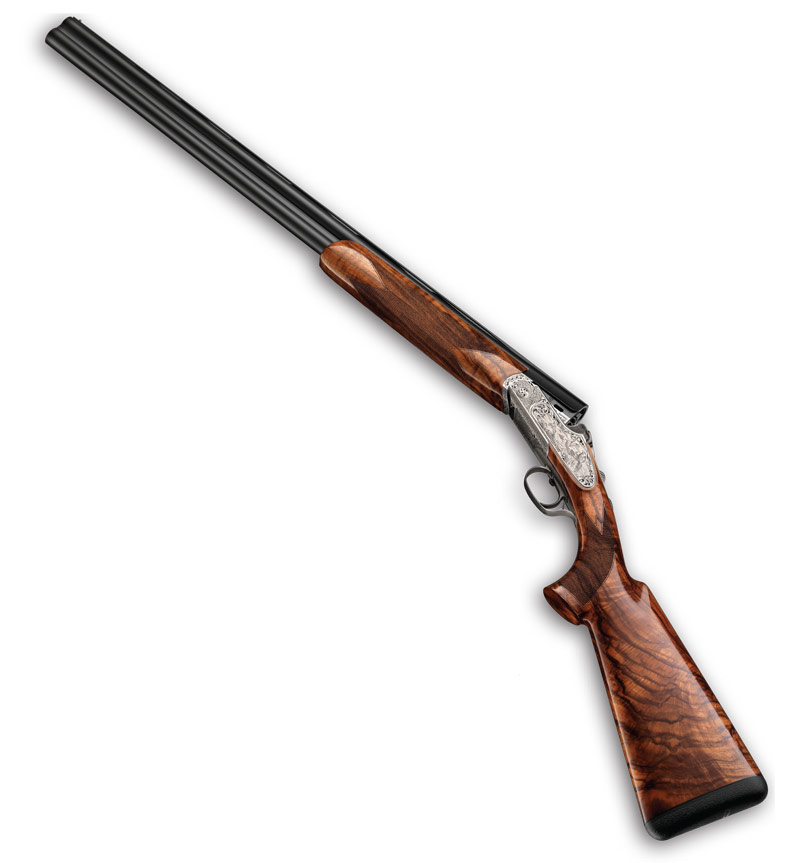 The F16 Grand Luxe Sporting from Blaser. The F16 has received an upgrade in its curb appeal. Now the Grand Luxe and Heritage models are offered with fine engraving and improved wood grades. 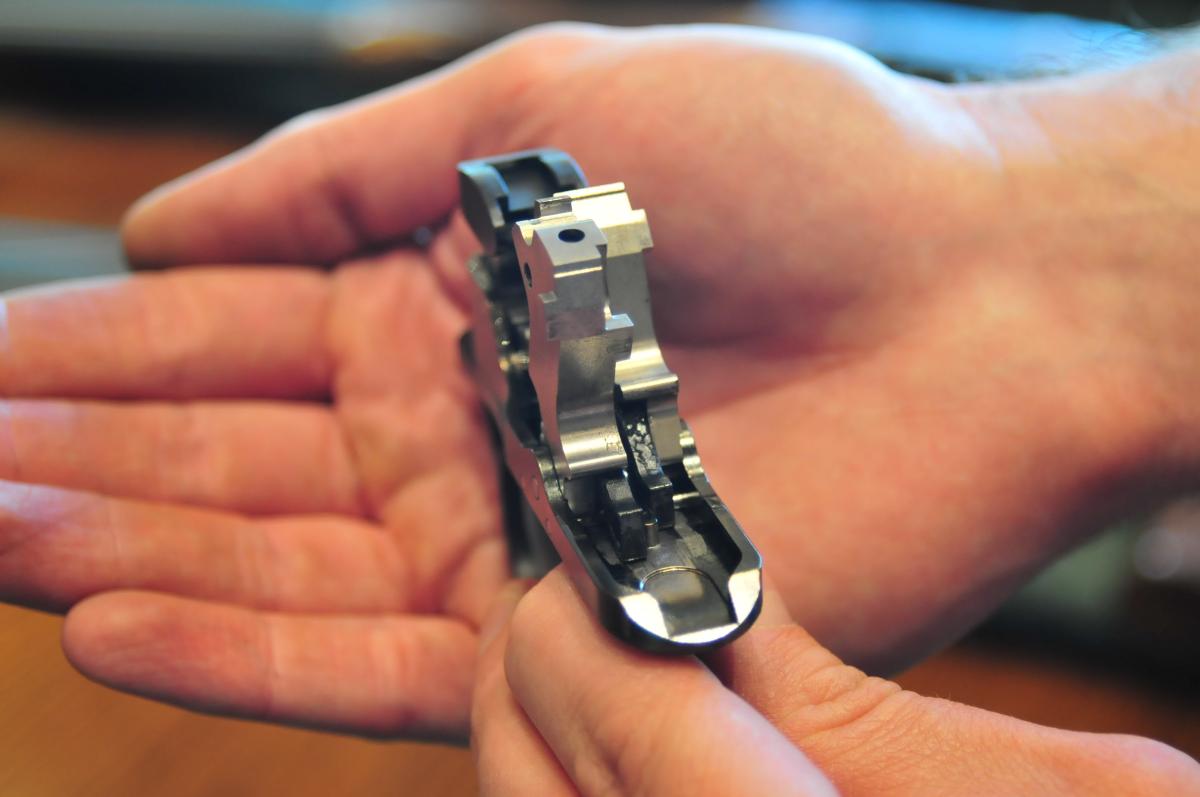 The trigger group of the F16 Grand Luxe and Heritage is compact, crisp, quick and reliable, as you expect it to be. 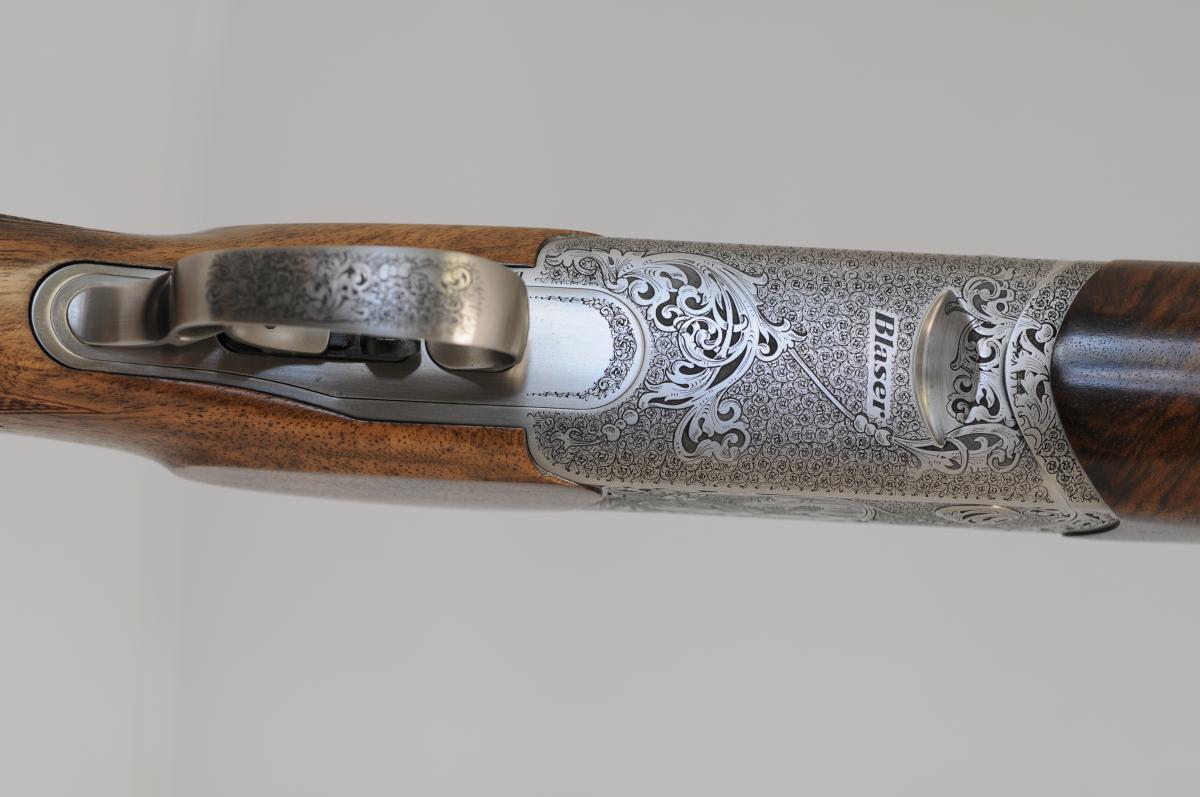 The underside of the new F16 with Bonsi Brothers engraving&nbsp;shows lush leaves and vines and small, tight scrolls that appear to be roseheads. 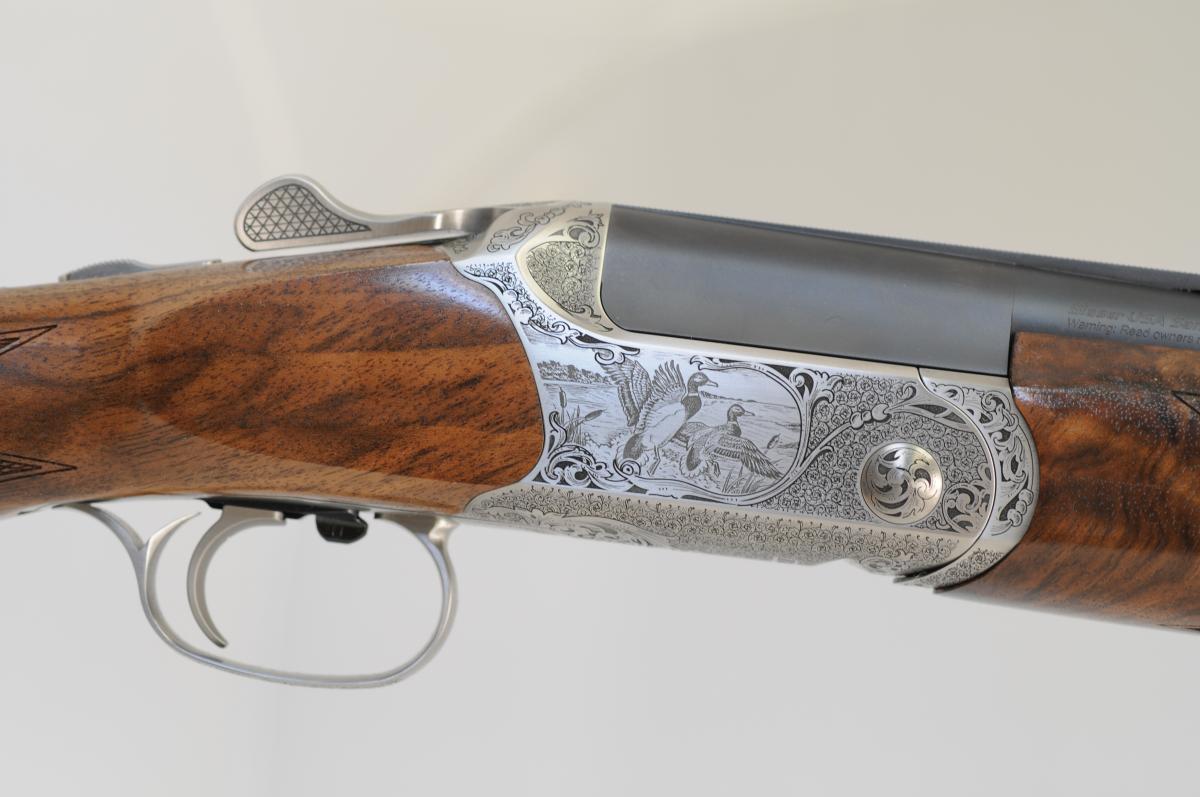 The right side of the F16 test gun I received. This side was adorned with game scenes of&nbsp;ducks landing on the water. Bonsi Brothers of Italy has perfected the process and art of laser&nbsp;engraving. The engraving on the F16 Grand Luxe and Heritage is a blend of laser and hand-cut metal work. 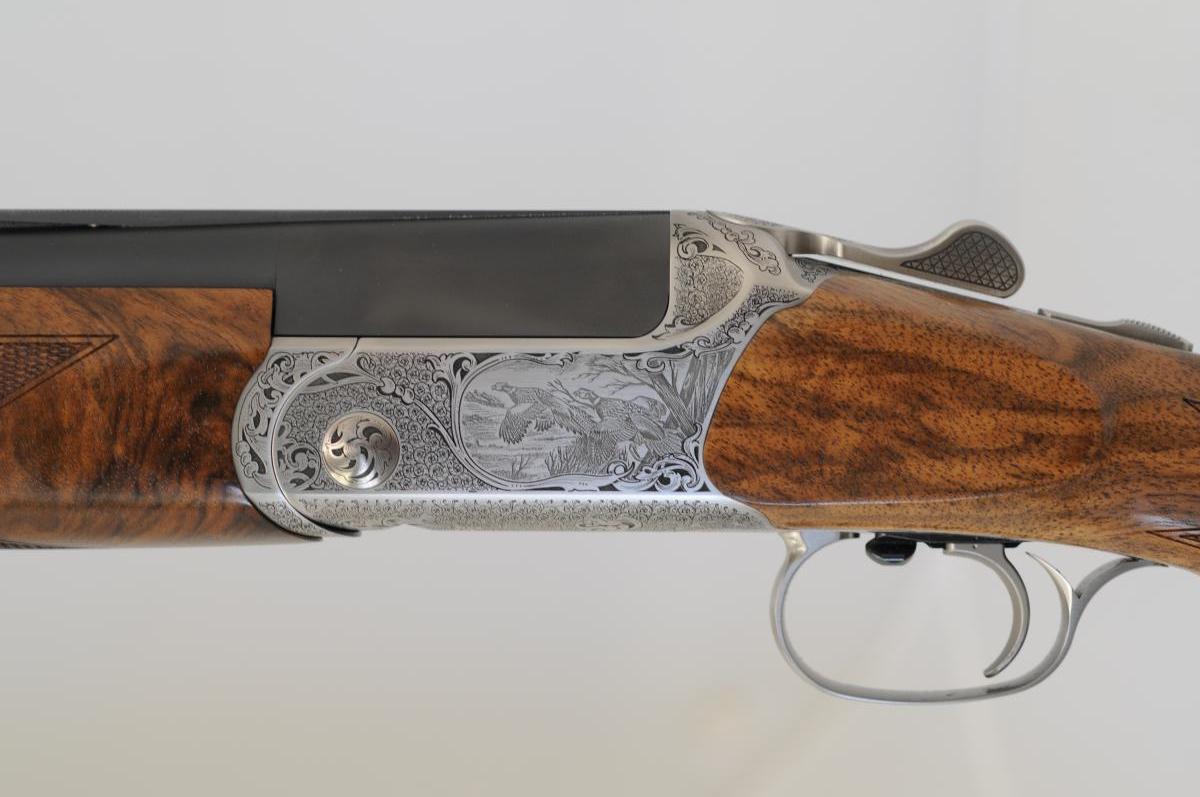 The left side of the F16 receiver shows pheasants taking flight from a field.

In 2004 the competition clay target aficionados of the U.S. began seeing a new kid on the block in the form of a new, low profile over/under from a German company previously known for its high-performance rifles. Blaser of Isny, Germany, began to export their innovative over/under shotgun known as the F3.

From those first years in the American market, the F3 has sculpted a comfortable niche for itself. It did so by means of its many unique features, which include the previously mentioned low-profile receiver (only 60.3mm tall), uber-powered ejectors, ultra-fast lock time, inline hammers, glass-like sears and, the most desired feature of all, a totally modular system among the major components. That is to say, the barrel, receiver, stock and forend will interchange with those same components on other F3s. This interchangeability is unique among shotgun designs. There is no need to have barrels hand-fitted and married to any particular receiver. One barrel can easily swap to another F3 receiver with perfect functioning. The ease with which the barrels can be swapped off one F3 and quickly and positively installed onto a different F3 receiver is not only a masterstroke of engineering, it is major cool, too.

Blaser has achieved an enviable standing within the sporting clays competitive ranks. They have garnered two NSCA Main Event National Championships back-to-back. The champions were Bill McGuire and Cory Kruse in 2011 and 2012, respectively. Both men are two-time NSCA Nationals Champions. As seemingly well as the F3 has done for itself, Blaser’s powers-that-be decided there was a need for a more affordable over/under that still exhibited the fierce quality standards of the F3.

The result of such decision-making has shown itself in the form of the Blaser F16. I wrote my original review of the F16 in the July 2016 issue of S/S. (Back issues are available by calling us 800-676-8920 or by ordering online at shotgunsportsmagazine.com, then click on Store). Like every Blaser I have tested, it impressed me and all who tried it.

Common features between the F3 and the F16 are fast lock time, low-profile receiver, hardened stainless-steel faceplate in the receiver that allows access to the firing pins, Anson-style forearm latch, PVD (Physical Vapor Deposition) coating on the receiver, Triplex bore consisting of .735 bores with 3” chambers and long forcing cones (1.4 degrees) as well as their EBS (Ejection Ball System). The EBS activates the ejector and cocks them when the shot is fired. No more need to be concerned about your ejector springs being under tension while the gun is in storage, as the ejector springs are not cocked.

The most noticeable feature not carried over onto the F16 from the F3 is the modular design. The F16 does not allow effortless swapping of barrels between receivers. Cost of producing this wonderful feature was the main reason it was not designed into the F16 platform. Remember, the main idea behind the F16 was to produce a more affordable shotgun. Keep the features you can but hold the MSRP (of the Standard model) to around $3,800.

Lock-up of the F16 barrels to receiver differs from the F3 as well. Where the F3 uses a full-width lug biting into a barrel recess to lock-up, the F16 incorporates two strong lugs situated near the very bottom of the receiver, one on either side of the breech. Strong, simple and secure would be my description of this lock-up system.

The F16 is designed to have more of a svelte feel in the hands. This is accomplished by designing the F16 receiver as a semi-round body action. I do not have large hands or long fingers, but the more slender feel of the F16 grip due to the inherent shape of the sleek, semi-round body receiver made the F16 test sample move like it was made for me. The moderate weight of only 7.75 lbs. of this gun did not hurt the feel of complete maneuverability and control of the gun, either.

The inertia-operated trigger group of the F16 is a more traditional design as well. The group is a compact mechanical system, well-tuned with sears breaking like glass at 3.6 lbs. This group features Blaser’s IBS (Inertial Block System) that prevents fan firing or doubling. Lock time of the F16 is very quick, even when compared to the speed of the F3 inline hammers. The hammers rotate upward from their cocked position on a single axis much like many other trigger group designs. The triggers of the F16 are very nice, indeed.

The F16 has recently been given an upgrade in its curb appeal. Where the gun-metal grey finish of the early F16 was rather spartan, Blaser significantly improved on this by offering the F16 with some outstanding engraving options. My test demo gun came to my office as a Grand Luxe model featuring 32" barrels and a Bonsi Brothers-engraved receiver. The motif is a game scene of pheasants taking flight on the left side and ducks landing on water on the right. These are blended into beautiful leaves and vines and tight scrolls of what appear to be roseheads. The engraving on the underside of the gun, the trigger guard, upper tang and top lever are more of the leaf and vine coverage. This is masterfully executed with both laser etching and hand-cut engraving. Photos in this review will depict this fine work. Bonsi Brothers of Italy has perfected the process by which guns are engraved with the use of laser. The Grand Luxe is a boxlock receiver that does not feature sideplates, whereas the Heritage model F16 allows the engraver much more surface area to exhibit his mastery of the art of gun engraving on the sideplates.

Wood grade on the Grand Luxe is an eye-catching Grade 6, and the wood level on the Heritage model is Grade 8. Both the Grand Luxe and the Heritage models of the F16 will be offered in Field and Sporting versions. Dimensions being offered at this time on the Heritage and Grand Luxe models are: 14¾" LOP, Drop at 2" with an optional 2.2" available and Cast of 1/8", ¼" or 5/16" may be had. These are pistol-grip designed buttstocks with the palm swell on the right-hand side being a large enough of a bulbous swell to notice but not so much as to make you uncomfortable with it. Forearms are of an English-style with the Anson-type latch safely mounted under the forearm tip. Checkering is 20 lines per inch in a classic-point style, laser done. There are no overruns, and the look is precise and as it should be.

All other features of the F16 Grand Luxe and Heritage models are common to the Standard model. I received a Grand Luxe Sporting model test gun which came with 32"/ 3" chambered barrels, 3mm red fluorescent front bead and a 1.7mm steel mid-bead, a 9mm to 7.5mm tapered flat rib, English-style forearm and 14¾" LOP. Barrel Balancer option mounting system is installed between the barrels under the forearm, but weights were not part of my test gun. However, the Stock Balancer was installed in the stock. An adjustable trigger blade is part of the F16’s Sporting package. The screw-in chokes that accompany the F16 are the famous Briley Spectrum series chokes. You get five Spectrums in all, those being Skeet, Improved Cylinder, Light Modified, Modified and Improved Modified. Accessories include a stock wrench, choke wrench, choke and hinge-pin grease and Allen® wrenches for both the trigger blade and Stock Balancer weights. The F16 comes housed and protected in a lockable, black foam-lined case.

Prior to my taking the Grand Luxe to the range, I wanted to check on the balance point of this new, highly-engraved version of the 16. By my primitive measuring technique, the balance point appeared to be slightly forward of the centerline of the hinge pin. I would guess this is due solely to the Stock Balancer weight being positioned slightly closer to the rear of the stock than normal. Even so, I seriously doubt anyone could tell the difference.

The afternoon of the range-testing day was beautiful. Hardly a cloud in the sky, soft breezes and 78 degree temperatures. All this and a new Blaser to shoot some rounds through…what more could you ask for? I decided to use the Modified in the first barrel (bottom) and the Improved Modified in the second barrel. The 5-Stand layout at the Auburn Trap Club offers a few presentations that I feel better about having a tad too much constriction. The ammo called upon to crush some birds was B&P’s famous F2 Legend with 1 oz. of hard 7½s at 1,230 f.p.s. and Nobel Sport’s Trap load releasing 1 1/8 oz. of hard 8s at 1,145 f.p.s. These loads have always performed well in my reviews. I felt no reason to deviate from them in this review.

As is normally the case, the LOP was too long for me, and I had to compensate by having my front hand grasp the forearm more to the rear of its length. This gives me the ability to clear my armpit and make a decent low-gun mount. The tall #9 Springing Teal at about 27 yards can sometimes give me a hard time. I hit it well with the first barrel and the Modified choke. The always tricky #6, a quartering incomer from the far right that transitions with a rapid downward curl, eluded me on my first attempt, but I became wise to its ways before long. The rest of the birds took their place on the scoresheet as “X”s. I had some of the other shooters take a few shots with the Grand Luxe. Some comments heard afterward were, “That is a beautiful gun. How much did you say it was? The recoil was very manageable.” One person mentioned he always wanted a Blaser. Now, here is one he can probably afford and with gorgeous engraving.

The new F16 Grand Luxe and Heritage are higher grades with improved wood quality and luxurious surface treatment by way of splendid engraving. These will be available soon at your Blaser dealer to the tune of around $7,415 MSRP for the Grand Luxe and an MSRP of around $9,995 for the Heritage. Great looking, great shooting, reliable and built with the kind of precision and features you want in a shotgun. That’s what you’ll find in the new F16 Grand Luxe and Heritage from Blaser.

Be sure to contact the dealers in this magazine who offer the Blaser line of high-quality over/unders. And, be sure to let them know you read about it in Shotgun Sports. SS