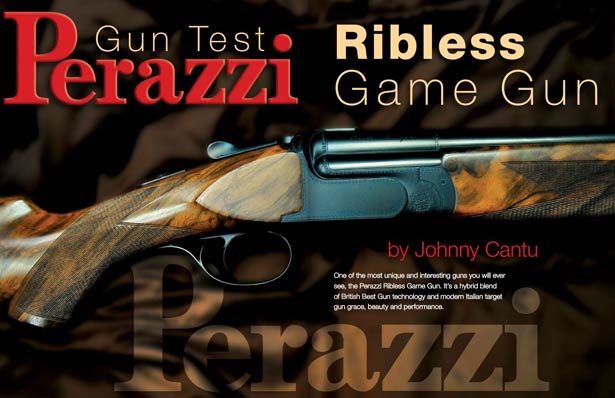 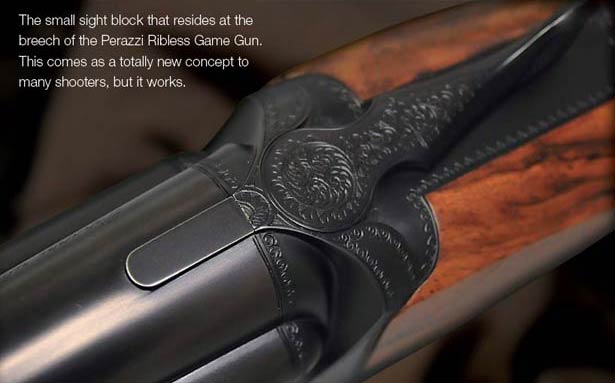 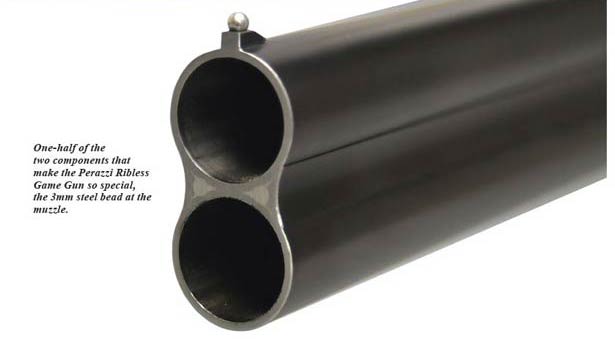 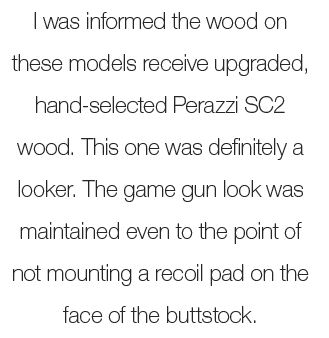 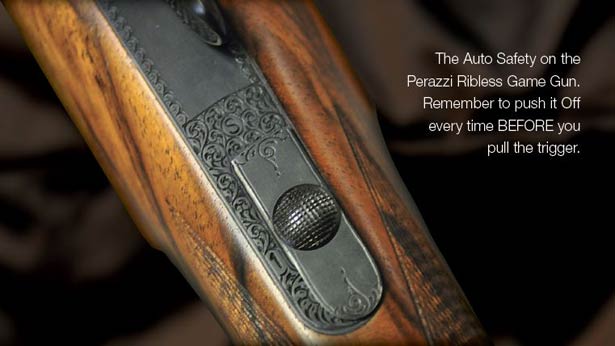 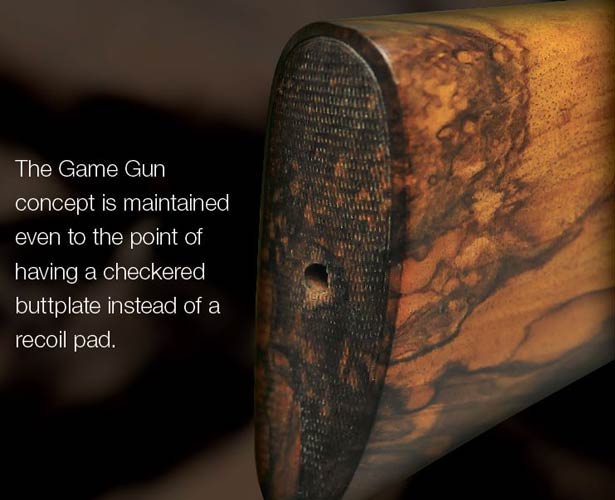 While attending the NSCA Nationals in San Antonio, Texas, in October of last year, I took a few moments to visit the Perazzi building. I was greeted by Perazzi USA’s Managing Director, Al Kondak. We spoke for a few moments, and I asked what new item he might have we could review. He took but a moment to consider his choices. Then Al showed me what I thought was a unique looking over/under. I held it in my hands for a better look and something about it just looked a bit…off. Aha! There was no ventilated rib atop the barrels. Hmm. What’s the deal?

Al told me it was a Perazzi Ribless Game Gun (PRGG). I thought to myself, “Why would you want an over/under, field or target model for that matter, without a rib?” Since that time, I have learned the ribless game gun concept has actually been around for quite some time.

As best as I can determine, the famed British gunmaker, Boss & Co., was the first to use such a configuration many years ago. The premise being a full-length rib, ventilated or otherwise, is not genuinely necessary on a shotgun. What the ribless game gun concept promotes is the use of a short stub-end of a rib at the breech used visually in conjunction with a small steel bead at the muzzle. This is based on the idea the mind connects the two in virtual alignment while the target is never at risk of being obstructed due to a mass of metal running along the length of the barrel. Incidentally, the lack of a full-length rib instantly reduces the weight and boosts the agility of the gun. The Boss Ribless Game Guns were beautifully balanced and lively in the hands of the fortunate and well-heeled few who owned one.

But this gun was a Perazzi, an Italian gun company primarily known for their famous clay target shotguns. How did a British Best Gun barrel concept become a central theme of an Italian Olympic medal-winning shotgun? It took a collaboration between the powers that be at Perazzi and two British gentlemen, Edwin Tattam and Kevin Phillips. Together the Perazzi Ribless Game Gun became a reality.

Let’s take a close look at this novel and unique over/under. The test sample I received sported very well-figured and colored grain in both the stock and forearm lumber. I was informed the wood on these models receive upgraded, hand-selected Perazzi SC2 wood. This one was definitely a looker. The game gun look was maintained even to the point of not mounting a recoil pad on the face of the buttstock.

The face of the stock is checkered. The basic dimensions as taken roughly off the stock without use of stock measuring tools are: Length of Pull-15”, Drop at Comb-1.44”, Drop at Heel-2.00” and approximately 3 degrees of pitch. Custom stock dimensions are offered. When handling the Perazzi Ribless Game Gun, I noticed something I very much would like to see more gun companies do — make the wrist of the stock smaller in diameter. With the use of a soft tailor’s tape measure, the wrist of the Perazzi measured 5” in circumference. The feel of security I receive when I wrap my medium-small hands around a smaller diameter stock just feels right and gives me a sense the gun will go exactly where I want it to go when I want it to go there. Such was the case with the Perazzi Ribless Game Gun. Checkering is a point style at 22 lines per inch. Additionally, you will notice a longer sweep in the shape of the wrist.

Balance point of this beauty was precisely at the hinge pins, and weight of the PRGG as detected by our postal meter and weight scale was a tad over 7 lbs., 7.18 to be exact.

The fabled MX-12 Perazzi serves as the platform for the PRGG with its instantly recognizable double-scalloped fences and crisp triggers. The decoration on my test sample was Spartan (by Perazzi standards), just one single line of filigree around the edges of the receiver and forend iron. A tiny bit more splash of filigree exists around the Safety, the bottom of the trigger guard and the head of the hinge pins. The matte black motif is strikingly handsome with its contrast against the streaks of the hand-rubbed oil finish of the European walnut stock and forearm.

The short stub of a rib at the breech atop the upper barrel (I call it a sight block) measures 20.5mm by 6.75mm. Its partner is a 3mm steel bead mounted upon a tiny pedestal at the muzzle. One of the things I thought might be at risk on such a gun, sans a top rib, would be the balance. Years ago when I was Senior Technical Advisor at Beretta USA in the Customer Service Department, one of the many things I learned was ventilated ribs are a way of placing the balance point of a shotgun where the maker wants it to be. This is done by the spacing of the rib posts, the height of the posts and the thickness of the posts. (Obviously, this also instantly affects the overall weight of the gun as well.) All of that goes right out the window if you don’t use a vent rib at all, doesn’t it or does it? Like I already mentioned, the balance point is exactly at the hinge pin, the traditional and universally accepted proper placement.

The barrels for the Perazzi Ribless Game Gun on my test sample were 29½” in length and sported fixed chokes. Inside bore diameters of top and bottom barrels measured .725”. My bore reader detected a diameter of .025 (Improved Modified) at the muzzle of the bottom barrel and a diameter of .033 (Full) within the top barrel. Trust me, these chokes are devastatingly harsh on clay targets, and I fully believe just as much so on warm-blooded, feathered targets. The barrels can be ordered in any length offered by Perazzi.

The trigger is a non-adjustable, Single-Selective with crisp break and imperceptible take-up. Classic Perazzi triggers. Perazzi chose to make use of an Auto Safety mechanism in the PRGG. This system operates by having the Safety bar pushed to the On (rearward) position every time the top lever is actuated. Barrel selection is performed by sliding the Safety bar to the right, exposing a numeral 1 (bottom barrel) or to the left which exposes a numeral 2 (top barrel). Shooters of the PRGG must become accustomed to pushing the Safety bar forward toward the top lever in order to allow the gun to fire. In the heat of the moment when birds are suddenly without the benefit of preamble flushing all around you, making for all the world like mini-F16s at full boost, you could be caught with your mental flaps down and actually forget to push the Safety to Off.

Testing of the Perazzi Ribless Game Gun included a round of 5-Stand, a couple rounds of skeet doubles and some targets off a few stations at sporting clays. Ammo used was NobelSport’s sporting clays 1-ounce load of 7½’s.

I will readily admit I am not a fan of light shotguns. I have been literally bitten by recoil enough times in the past to avoid such situations. Nor am I preferential to raw, checkered buttplates on a 12-gauge over/under. That was true until I tested the Perazzi Ribless Game Gun. Perazzi has created a true lightweight, easy-to-carry in the field bird gun that will not destroy your shoulder.

My first few shots were on Springing Teal targets about 30 yards distant from my stand. This target comes off a dedicated Springing Teal LaPorte trap, and it gets out of Dodge in a hurry, straight-up. I hit the majority of targets with authority and no pain. Yea! One thing I am sure of… the Perazzi Ribless Game Gun moves like greased lightning in your hands toward the bird and when it connects, makes mincemeat of it.

The skeet doubles targets were an eye-opener. I shot 15 pair from skeet stations 3, 4 & 5. Rarely have I ever hit targets that hard and that fast. The Perazzi Ribless Game Gun was more agile than any gun I have ever tested. No, I didn’t hit them all but was totally happy with how I hit them.

The Perazzi Ribless Game Gun is a unique piece of the gunmaker’s craft. I am informed the MSRP is $17,000, which includes the gun (in standard grade), SC2 wood upgrade, Auto Safe and a custom oak and leather case. The Perazzi Ribless Game Gun can be ordered from Pacific Sporting Arms in Azusa, CA. You may call them at (626) 633-1002 or visit their website at pacificsportingarms.com (see their ads on pages 3 and 35).

Not everyone will have a need for a ribless game gun. But for the avid bird hunter, particularly say, a pheasant hunter where performance on a time schedule and at a distance are a must, you just might want to take a long, hard look at this new Perazzi. SS