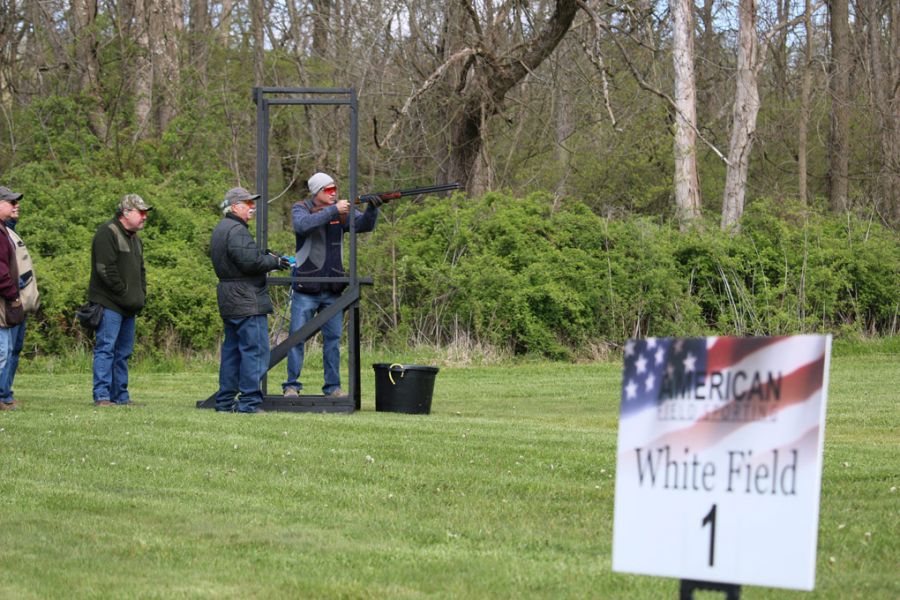 AFS offers four field configurations: Red, White, Blue and Green. Gun clubs can use the format of their choice. Signage indicates which field format is being utilized. 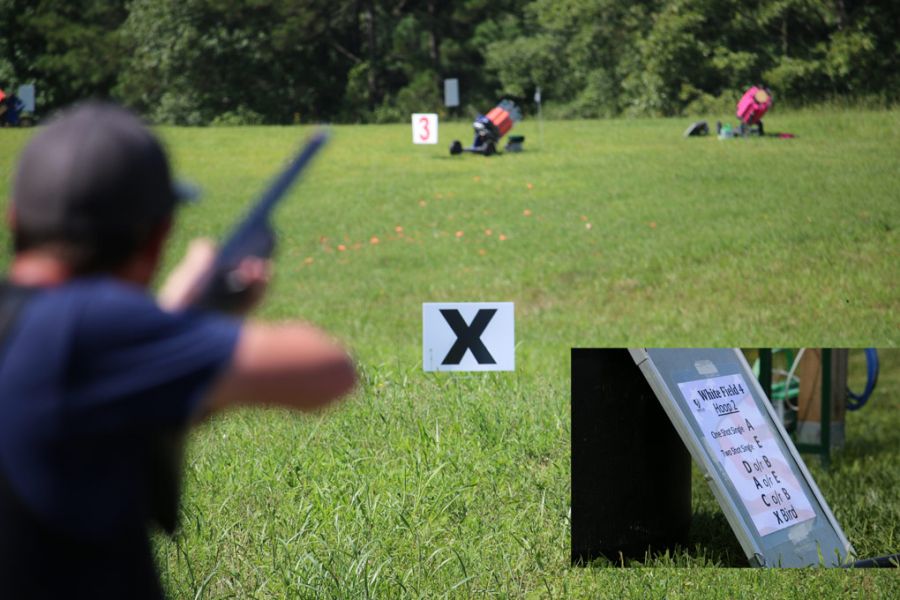 An innovative aspect of ASF is the inclusion of an XBird at each station, as indicated by the signage on the field. The XBird is the most-difficult target at the station. It is a two-shot single. Broken on the first shot, it is worth two points and broken on the second shot, it is worth one point. AFS competitors may view each target as a single prior to shooting in numerical or alphabetical order except for the XBird. They may not view any pairs. 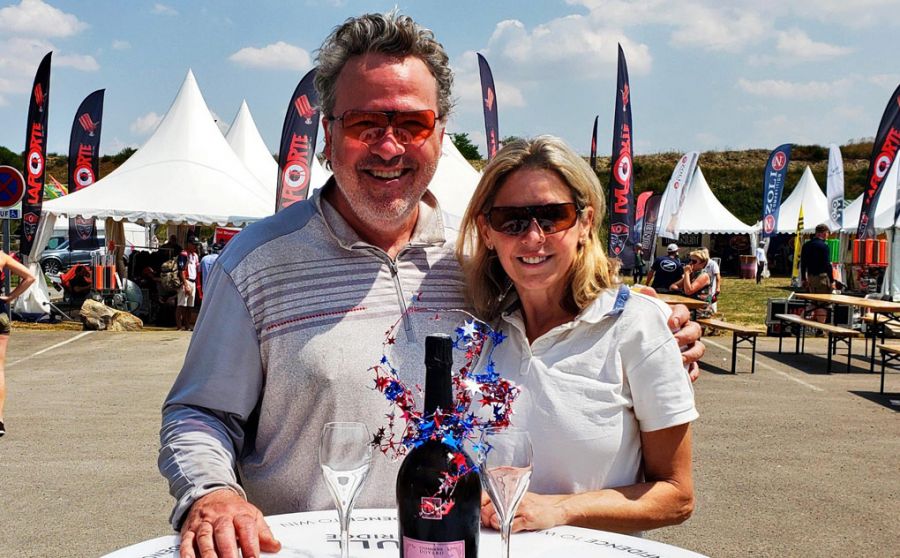 Mark Baltazar, founder of AFS, and his wife, Lana Lenar, at the World FITASC in France in 2019. 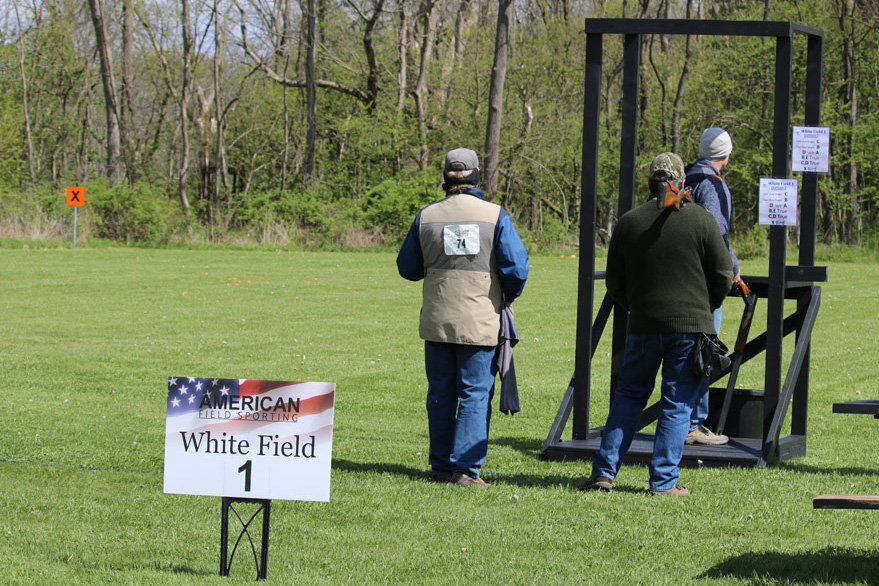 Shooters compete in an AFS event on a White Field at Eagle’s Nest Sporting Grounds in Ohio. The first AFS event was thrown at Eagle’s Nest. Note the menu for the station posted on the shooting stand. 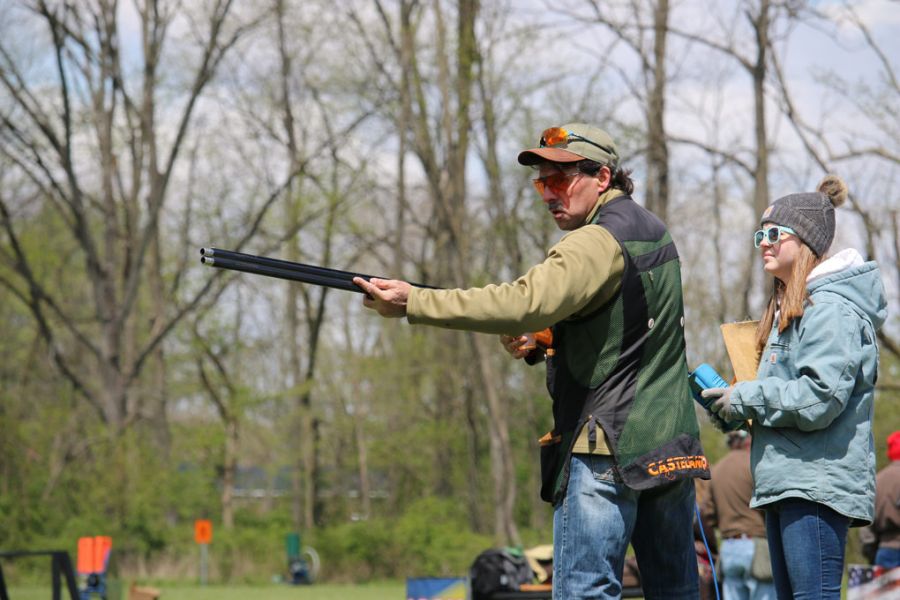 Master and AA class shooters must shoot from the gun-down ready position. All others can shoot with the gun pre-mounted. (NSCA classifications are used in AFS.)

A new clay target game is gaining in popularity across the country because it has all the fun and challenge of other games, but a lot less formality and fewer rules. American Field Sporting (AFS) was introduced in 2020 and added to the portfolio of games sanctioned by the National Sporting Clays Association (NSCA). Since then, AFS events have been held across the United States and in several other countries.

In January of 2020, the NSCA announced the organization had entered into a two-year agreement with AFS. As a result, shooters competing in AFS events are classified under the NSCA classification system, and all targets are included in the total targets shot by NSCA registered shooters. Participants are also eligible for punches in alignment with the other NSCA disciplines of Sporting Clays, 5-Stand, Super Sporting and Parcours de Chasse (FITASC.)

AFS was founded by Mark Baltazar, a member of the NSCA Executive Council from New York. Baltazar has been on the All American FITASC team several times in the past. He and his wife, Lana Lenar, began shooting Sporting Clays about 10 years ago and now regularly travel to shoots around the country and world.

Input from the Shooting Community
While Baltazar’s partner in this venture is Brett Seibert from Northbrook Sports Club in Hainesville, IL, he says input from shooters has really shaped the development of the game. “We really do think of shooters as an important part of the game. They have helped develop it from the start and supported it ever since. It wouldn’t be the game it is without their participation and input,” he said.

The development of AFS began in 2019 when Baltazar, who is the head of a marketing and communications consulting firm, saw the need for something new in the world of Sporting Clays.

“I created American Field Sporting because sporting clays has not had a new game since 1995 with the introduction of Super Sporting. As a marketer, I realize if you don’t evolve, if you don’t create new offerings, you stagnate. And when you stagnate, you die over time. I wanted to bring innovation to our sport. I wanted to create a new game,” he explained.

AFS combines elements of Sporting Clays, Super Sporting, 5-Stand and FITASC along with some new, challenging twists. Some of the goals he set when creating this new clay target sport were to: have fewer rules, optimize trap machine usages, add innovative elements and take less time to complete than a round of Sporting Clays or FITASC.

Baltazar took a community-based approach to the creation of AFS and has used the power of social media to gain input into the development of the game. He started by working with a diverse group of people to create the initial rules for AFS. “I worked with a bunch of people — club owners, new shooters, old shooters and big-name shooters about a set of rules,” he said.

He developed a Facebook page and invited shooters to participate in the development of the game. “We had 1,000 people right away, and we now have 3,500. We started with 12 rules that we put out to the group, and we got feedback on them. We actually changed some of the rules based on input from the community and put them up for votes. My goal was to create a game that was created by the community. So the community creates the game, the community will play the game because the community helped to create it,” he explained.

In addition to getting input for the proposed rules, they held eight test matches of AFS to get input from people who were actually shooting the game. Baltazar did surveys at each of those shoots to find out what people liked and what they did not like. That led to additional changes to the game.

Baltazar has continued to utilize input from shooters as the rules of the game and other components have been developed and refined. This process has been used to develop a Shooter Quick Start Guide, Guidance for Clubs & Target Setters and other tools available on the AFS website www.AmericanFieldSporting.com.

Growth of the Game
The community input approach to the development of the game has created a lot of interest in AFS, and events are starting to be held across the country. Baltazar said they held about 18 AFS events last year where more than 1,000 participants shot 50,000 clays. This year, the response is growing as word is spreading about the game. In fact, AFS events are being held at several of the NSCA Regional shoots.

AFS Gamebore Classic
In addition to events being held at clubs across the country, Gamebore has partnered with AFS to host the 2021 American Field Sporting Gamebore Classic. It features three qualifying events which lead up to the Gamebore Classic Invitational.

Competitors must shoot two of the three qualifying events to be eligible for an invitation to the final event. The top five shooters from each NSCA class, a total of 35 shooters, will be invited to compete for a 2022 Gamebore sponsorship, vest, ear protection, Gamebore White Gold shells and many more valuable prizes.

The final event, the Gamebore Classic Invitational, will be held at Cypress Creek Lodge in Conway, AR, on December 3-5. Cypress Creek, run by international FITASC champion David Radulovich and Olympic trapshooter Kayle Browning, sits on 150 acres of land with facilities for multiple shotgun disciplines and hunting land, as well lodging for guests.

Taking AFS Worldwide
AFS is spreading to other countries as well. Events have been held in Canada, Australia and Norway. There are also discussions to shoot it in the UK, France, Spain, Portugal, Thailand, Ireland and New Zealand, according to Baltazar.

“Then in 2022, it is going to be an International Championship because Australia and Canada will be coming. Unfortunately, they cannot come this year. What I’m hoping is every country has a National Championship and then we can have a World Event. It’s going to take years but that really is the goal,” Baltazar said. SS

Maggie Kelch is an avid outdoorswoman who enjoys fishing, camping, hunting and shooting. With a degree in Journalism from Ohio State University, she spent more than 40 years in communications. She has written for numerous local, state and national publications. 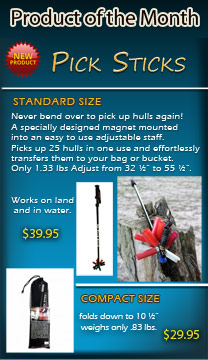